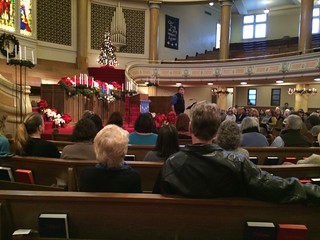 I attended my first David Whyte workshop last month, held at the First Covenant Church in Seattle. The theme was The Harvest of Winter, exploring the challenges posed by difficult harvests and the opportunities they provide for asking beautiful questions: disturbing, provocative questions whose answers can unlock deep, hidden insights. These questions become increasingly important during increasingly difficult times, when many of our traditional sources of power and security are undergoing transition.

Throughout the workshop, Whyte recited - mostly from memory - poems written by him and other poets, told stories about the contexts in which the poems originated, and highlighted the beautiful questions articulated through the poems, implicitly or explicitly. The content seemed loosely organized around a three-step process one might follow when attempting to harvest from a difficult source of nourishment and sustenance, which I will briefly enumerate here and then elaborate further below.

Whyte frames much of our awareness of ourselves and others - and our relationships and interactions with each other and the rest of the world - in terms of conversations, a concept he has articulated in many ways in many media, including the following excerpt from a SoundsTrue interview with Tami Simon on "Being at the Frontier of Your Identity":

The old Latin root of that word is Conversatia and it really means a kind of "living with" or "in companionship with," so you’re having a Conversatia with your spouse or your partner at home every day. There’s a "living with" whether it’s spoken out loud or not. There is an equal kind of conversation with silence, and with a particular way that you as an individual ask the question of life. You’ve got to find that contact point as an individual. Ask the question, "Where am I interested? Where, in a very short time, do I become passionate once I’ve opened up that initial interest? What do I have energy for? And will I have faith enough to actually spend enough time that I can open up that door into what to begin with is a new territory but eventually becomes my new home?"

One of the interesting stories he shared in illustrating this conversation about passions was his experience in applying for a job as a naturalist guide aboard a schooner in the Galapagos Islands (a story I first encountered in his book, The Heart Aroused). Among the 500 applicants, 90 were invited for an on-site interview for the position, and what set him apart - and made him an ideal candidate for his ideal job - was not so much his degree in marine biology, but all the extracurricular interests he had pursued during his studies: scuba diving, rock climbing and vagabonding around Europe (and thereby picking up some foreign languages). The experience led him to adopt an abiding faith in his intrinsic interests and passions ... and subsequently to encourage others to similarly have faith in what draws them.

I've long been intrigued by the stories we make up about ourselves. Whyte characterized such stories as hermetic enclosures - bubbles that we create so we don't have to engage in wider conversations. One of the stories he once made up about himself was a need for quiet and solitude in order for him to write. Letting go of that story opened up new frontiers - internally and externally - for his subsequent writing.

The identification and letting go of untrue stories reminds me of The Work of Katie Byron, and the power of articulating and transforming - possibly through recombination - personal narratives articulated by John Hagel. An interesting observation about this topic shared by Whyte was that the nice thing about letting go of a story that you suspect is not true is that if it later turns out to be true, you can rest assured that it will come back to you.

White also made a non-specific reference to some story involving his mother that he learned was not true after her death. He did not share any details about this story, but I wonder if it was a story he wrote about in Crossing the Unknown Sea in which his mother told him about a dream in which she interceded to save him during a near death experience during his time in the Galapagos, which included details of the experience that he had never told her about. Regardless of the truth of that particular story, the revelation it evoked for him seems like a timeless truth:

But irrespective of the far-fetched psychic reality of it all, something else had happened inside me. I stopped trying to do it all myself. I was like everything else in this life. I didn't need to have absolute total control over my destiny. I couldn't have it anyway. ... I was given a sense of the intimate way everything is a brother and sister to everything else. Everything we see as private is somehow already out in the world. The singularity of existence is only half the story; all our singularities are in the conscious and unconscious conversation with everything else.

Whyte often uses the word marriage to describe the intimate relationships we have with our selves, other people and even our work, a theme most extensively elaborated in his book, The Three Marriages: Reimagining Work, Self and Relationship. During the workshop, he observed that there is no worthwhile path that does not risk leaving us heartbroken, and that even the longest, most successful marriages include periods of heartbreak. This notion of periodic heartbreak is a theme he writes about in one of his periodic "Letters from the House", this one on The Poetic Narratives of Our Time:

If we are sincere, every good marriage or relationship will break our hearts in order to enlarge our understanding of our self and that strange other with whom we have promised ourselves to the future. Being a good parent will necessarily break our hearts as we watch a child grow and eventually choose their own way, even through many of the same heartbreaks we have traversed. Following a vocation or an art form through decades of practice and understanding will break the idealistic heart that began the journey and replace it, if we sidestep the temptations of bitterness and self-pity, with something more malleable, compassionate and generous than the metaphysical organ with which we began the journey. We learn, grow and become compassionate and generous as much through exile as homecoming; as much through loss as gain, as much through giving things away as in receiving what we believe to be our due.

I recently encountered a related illustration and excerpt in the BrainPicker review of The ABZ of Love, which nicely captures the periodic heartbreaks involved in loving relationships ... and although that book focuses on human relationships, I believe these highs and lows - or, perhaps, dark nights of the soul - also characterize our relationships with our work. 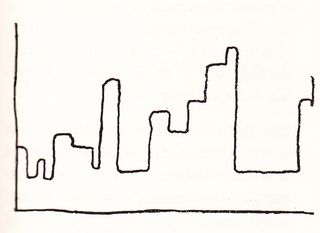 …after swinging around a certain point for a time, very small swings to and from in either direction, a sudden drop with the resultant feeling of hopelessness [and then] once more pendulation around one point for a time, then a drop, then that hopeless feeling, improvement again, etc., etc., without ever reaching the absolute ideal. Disappointments and depressions are necessary features of any process of learning, every development.

One of the themes that pervades much of Whyte's poetry and prose is the courage to explore the edges of our identities (hence the title of the SoundsTrue interview). During the workshop, he encouraged us to look to our edges as we explore new conversations - or new stories we might make up about our selves - so that "the edge may become the center". One of his poems that he recited, Coleman's Bed, speaks to this process:

Above all, be alone with it all,
a hiving off, a corner of silence
amidst the noise, refuse to talk,
even to yourself, and stay in this place
until the current of the story
is strong enough to float you out.

The story I have been making up about myself for some time now is that I am currently "between stories", a period in which I don't seem to have - or be aware of - a particularly powerful or passionate personal narrative. Considered in the context of the poem, this prompts a beautiful question about why no new story has yet gained sufficient strength to "float me out". While I find myself talking less - online and offline - I may not have been cultivating sufficient silence to allow a new story to emerge ... and upon reflection, that seems an appropriate note upon which to end this post.

Posted at 10:27 AM in Events, Poetry, Relationships, Work | Permalink | 0 comments