Science journalist Jonah Lehrer posted an interesting article last week about aging star athletes' embrace of biologic medicine, "Why Did Kobe Go to Germany? An aging star and the new procedure that could revolutionize sports medicine". The article describes Regenokine, a relatively new procedure for treating joint and tendon problems that sounds similar to the platelet rich plasma (PRP) treatment I underwent for my right elbow nearly 5 years ago. I have enjoyed a nearly full recovery from the pain and limitations of chronic elbow tendinosis that had plagued me on and off for several years prior to treatment, and I enjoyed reading about others' successful treatment experiences and some of the studies about treatment alternatives.

"Biologic medicine" treatments all engage the body in healing itself, typically involving the extraction, manipulation and re-injection of the patient's own blood or other bodily fluid. Regenokine treatment involves withdrawing a small sample of blood from the patient, heating it and then spinning it in a centrifuge to separate the constituent elements; the resulting yellow colored middle layer is then extracted and injected into the patient's problem area (e.g., the knee). PRP involves withdrawing blood and spinning it in a centrifuge, but does not involve heating, and - as the name suggests - the platelet-rich layer is extracted for injection. Bone marrow injections, involving stem cells, use a similar approach. 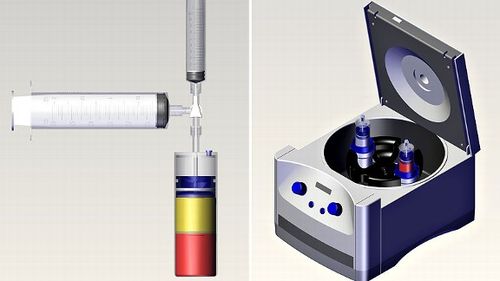 The reason Kobe, A-Rod, and other athletes travel to Germany for their biologic treatments involves a vague FDA regulation that mandates that all human tissues (such as blood and bone marrow) can only be "minimally manipulated," or else they are classified as a drug and subject to much stricter governmental regulations. The problem, of course, is figuring out what "minimal" means in the context of biologics. Can the blood be heated to a higher temperature, as with Regenokine? Spun in a centrifuge? Can certain proteins be filtered out? Nobody knows the answer to these questions, and most American doctors are unwilling to risk the ire of regulators.

Lehrer offers a balanced perspective, noting that while a few famous athletes appear to have experienced healing after biologic medicine treatments, there is - as yet - little supporting evidence from rigorous clinical trials, and so these could represent "the latest overhyped medical treatments for desperate athletes". A 2006 article co-authored by Mishra described a pilot study showing the effectiveness of PRP for chronic elbow tendinosis (the problem I was suffering from), and a 2010 article co-authored by Sampson described another pilot study showing the effectiveness of PRP on knee osteoarthritis. However a 2010 article reported on a Dutch study that showed no significant benefit of PRP over saline injections for chronic Achilles tendonopathy. Another Dutch study, involving a double-blind randomized trial of PRP with 230 patients has been completed, but it could be another several years before the results appear in a peer-reviewed medical journal. Mishra's blog includes a recent post referencing other studies supporting the effectiveness of PRP.

I don't know of any studies of Regenokine, but a 2008 pilot study of interleukin-1 receptor antagonist demonstrated "statistically significant improvement of KOOS [Knee injury and Osteoarthritis Outcome Score] symptom and sport parameters", and a 2009 study reports that Autologous conditioned serum (Orthokine) is an effective treatment for knee osteoarthritis. According to a December 2011 post about PRP and Regenokine in the Wordpress blog, Knee Surgery Newsletter (which offers no information about the author), Orthokine was the brand name under which Regenokine was previously marketed, and Regenokine and Orthokine are both brand names for interleukin receptor antagonist treatment.

The Lehrer article also highlights doubts - or what should be doubts - about the effectiveness of the traditional alternative to biologic medicine treatment - surgery - describing the results of a 2002 peer-reviewed study appearing in the New England Journal of Medicine, A Controlled Trial of Arthroscopic Surgery for Osteoarthritis of the Knee:

Consider an influential 2002 trial that compared arthroscopic surgery for knee osteoarthritis to a sham surgery, in which people were randomly assigned to have their knee cut open but without any additional treatment. (The surgeon who performed all the operations was the orthopedic specialist for an NBA team.) The data was clear: there was no measurable difference between those who received the real surgery and those who received the fake one.

As I've noted before in the PRP thread here on my blog, I'm not a medical expert, and I don't even follow the medical literature about PRP or other treatments with any regularity (I discovered this article because I follow @jonahlehrer on Twitter). I have enjoyed a complete recovery of functionality and nearly pain-free use of my elbow following PRP therapy. I like to think that there is a causal relationship in my personal experience - especially after the failure of several other treatments I tried - but as noted in Lehrer's article, more evidence is required to support any general conclusions on the effectiveness of the treatment. Meanwhile, I'm happy that to see PRP and other biologic treatments gain greater recognition and awareness.

The Games We Make Up About Ourselves: Interactive Narratives of Personal Transformation

I'm not a gamer, but a segment in last week's On The Media, Personal Video Games, inspired me on several levels, offering insights into the ways that game designers are utilizing their craft to enable others to more effectively relate to their personal trials and tribulations. I've long been fascinated with the stories we make up about ourselves, and even though I rarely play online games, having played the games mentioned in the segment, I can appreciate how adding an interactive dimension can make the heroes' journeys embodied in those stories more accessible.

Co-host Brooke Gladstone interviewed three game designers about their games, and the personal challenges those games were designed to recreate. Anna Anthropy designed the game Dys4ia to capture the dysphoria she experienced as a trans-woman throughout a 6-month odyssey of seeking out and undergoing hormone replacement therapy. "I made the game to communicate all the frustration of the experience of dealing with the medical industry, dealing with society, my own gender dysphoria, and also the hope that comes out of it after struggling up what is basically a mountain". The game has 4 levels:

While I can't personally relate to being or becoming transgender, I can relate to several challenges that arise in accompanying a loved one on an interminable health odyssey such as the one embodied in the game: struggling with difficult decisions about medical procedures, dealing with the labyrinthian medical industry, interacting with friends and family who want to help but don't fully understand, coping with [someone else's] mood swings and experiencing varying levels of hope and despair about whether things will get better.

Michael Molinari designed the game, That was Yesterday ("A personal journey about learning to move forward in life"), to embody a different type of transition, his move from a small town in New Jersey to San Francisco to take a new job (designing games). I have to admit that I was skeptical when I first heard his description of the game, which depicts "a wall you need to face away from, and in order to get through the wall, instead of bumping your head against it, you need to look to the past and find all the things that help you drive forward ... When you face away from this wall, which kind of represents problems and fears and whatever, you think it might be this dense wall, and it kind of recedes and moves back. The key there is to exercise patience and wait for the wall to disappear, and once it's off the screen, then you're able to turn around, face forward and start moving through life a little bit further."

Even playing the game, I found it disconcerting that the only way to "win" - i.e., avoid being blocked by the wall - was to turn away from the wall, which I initially interpreted as a form of denial. However, upon further reflection, I could see how the game might represent the wisdom of the serenity prayer: grant me the serenity to accept the things I cannot change, the courage to change the things I can, and the wisdom to know the difference. One of the new dimensions of awareness that my wife and I have learned about functional gastrointestinal disorders is the tight loop between stress and disease, and how sometimes the best solution to dealing with the angst of not knowing the source of or solution to recurring bouts of pain and discomfort is to just let go ... to figuratively face away from the impenetrable and implacable wall.

When we tell stories about creativity, we tend to leave out this phase. We neglect to mention those days when we wanted to quit, when we believed that our problem was impossible. Instead, we skip straight to the breakthrough. We tell the happy ending first.

The danger of this scenario is that the act of feeling frustrated is an essential part of the creative process. Before we can find the answer — before we can even know the question — we must be immersed in disappointment, convinced that a solution is beyond our reach. We need to have wrestled with the problem and lost. Because it’s only after we stop searching that an answer may arrive.

Sebastian Janisz designed another game about beating your head against a wall, Lackadaisium, which embodies his struggles with depression and loneliness. "I started making it just to kind of relieve myself, because I was feeling all this emotion, or more like a lack of emotion. I thought maybe making this game would make me feel better. Essentially, what I wanted to try and do was make it so that when you play it, because of the way the game play is designed, you'll start to feel how I felt." Unfortunately, the game only runs on Windows platform, and I'm a Mac user, so I have not yet played this game, but I can certainly relate to struggling with depression and loneliness.

Several insights and connections emerged throughout the interview. Anna's observation that games are about rules reminded me of the pervasiveness and permeability of finite and infinite games that I first discovered via James Carse. Sebastian's observation that he made the game for himself, and Michael's surprise that when others play his hybrid semi-autobiographical game, "some people had more personal experiences than I even had when I was making it", both reflect Carl Rogers' wisdom that what is most personal is most general. The raw vulnerability embodied in these games provide compelling examples of authentic player journeys - vs. trendy and shallow gamification - that Amy Jo Kim has articulated and championed so effectively.

Finally, Anna's closing observation - perhaps elaborated further in her book, Rise of the Videogame Zinesters: How Freaks, Normals, Amateurs, Artists, Dreamers, Drop-outs, Queers, Housewives, and People Like You Are Taking Back an Art Form - that amateur games can be viewed as both an art form and a reaction against the creeping conservatism of the game industry reflects the rise of the do-it-yourself movement, and raises the possibility that game design may provide a compelling channel for following Doug Rushkoff's exhortation to Program or Be Programmed.