Design for Health: Notes from a Multidisciplinary CSCW 2012 Workshop

I participated in an incredibly well organized and facilitated workshop on Brainstorming Design for Health: Helping Patients Utilize Patient-Generated Data on the Web on Saturday. The participants represented a diverse range of backgrounds and interests - even for a workshop at a Computer Supported Cooperative Work (CSCW) conference, already a particularly diverse community. Our workshop had representation from fields including computer and/or information science (especially data geeks), design (several flavors), anthropology, urology and even veterinary medicine.

After outlining the agenda and going around the room with brief introductions, we were treated to a remote keynote presentation by Paul Wicks, Director of Research & Development for PatientsLikeMe, a web service for compiling and provisioning patient-reported data for use in clinical trials. Paul offered an overview of the organization, highlighting some of its successes - including the discovery of the ineffectiveness of lithium for treating ALS and a more recent study revealing the positive user experiences of PatientsLikeMe users with epilepsy (55% of respondents consider PatientsLikeMe “moderately or very” helpful in learning about the type of seizures they experience) - and some of the challenges they face with respect to complexities (ontologies for symptoms, diagnoses and treatments) and incentives (ensuring that patients who give something get something).

The epilepsy study was paticularly interesting to me, as I've explored the web 2.0 service on behalf of my wife, who suffers from a few chronic conditions, and we were both struck (and personally disincentivized) by how narrowly structured the interface for describing conditions was. Paul acknowledged the regimentation of the data and interface, but noted that very little progress has been made in using natural language processing techniques to effectively extract useful data from less structured patient descriptions of symptoms, diagnoses or treatments, despite a great deal of effort.

PatientsLikeMe takes a very pragmatic approach to serving as an intermediary between patients' data and organizations that are willing to pay for that data, and so they focus on the sweet spot of data that can be relatively easily collected and provisioned. I was glad to hear about the epilepsy study, as it provides evidence that some patients are also reaping benefits from sharing their data. More generally, Paul was forthright and even evangelical about the business orientation of PatientsLikeMe (they are a for-profit corporation) and encouraged all workshop participants to think about sustainability - beyond the scope of government grants, business contracts or other relatively short term fors of support - in our own work.

After the keynote, we were partitioned into four working groups, all of which were tasked with defining a problem, designing a solution and reporting back to the broader group. The focused small group activity provided a context for stimulating discussions about a range of issues involving health, data, users and design, and the time constraints provided an impetus to keep things flowing toward a goal.

During the report outs after breakout session 1, Group 3 described a persona, "Kelly", who was so remarkably similar to my wife, and her epic digestive health odyssey (which we described in a rather epic long form narrative blog post last August), that I decided to switch groups during the lunch break. Group 3 was particularly diverse - with two interaction designers, a graphics designer, an MD, an anthropologist, and a few folks (like me) with computer or information science backgrounds - and most of the members came were oustide of the traditional CSCW community (which itself is rather diverse). This diversity, coupled with the participation of people who could personally relate to the plight of the patient persona of "Kelly", enabled us to make good progress on our design for helping "Kelly". 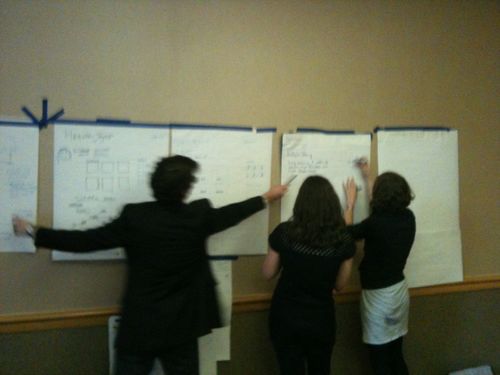 The first - and in this case, probably final - design, "Health Tryst", was modeled - in both name and functionality - on Pinterest the increasingly popular online pinboard for "organizing and sharing the things you love", and included features for helping a patient with irritable bowel syndrome (IBS) navigate to relevant information and online support groups that might help her (or him) cope with a chronic condition, and to share these items with others. 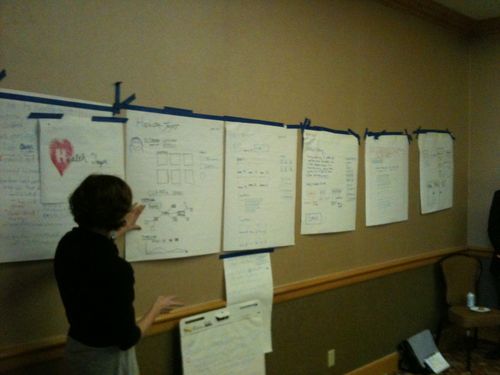 I won't go into all the details of the design, as I believe the most valuable aspect of the process were the discussions that arose in the context of designing something that would be useful to a patient like "Kelly" suffering from IBS. The one feature I will highlight is a capability for Kelly to enter her own personal narrative using her own words, and the application would automatically seek out both synonyms used more commonly in the medical and/or patient support communities, as well as automatically link to resources associated with the themes and topics indicated in her narrative.

The unfolding design sketches and scenario offered effective props to keep those discussions focused and flowing. I'm not sure if anyone will carry the design forward, but suspect everyone involved came away with a keener awareness of some of the issues faced by "Kelly" and the medical providers and online community members who might help her.

There were several other interesting designs that emerged from the other groups. Unfortunately, I didn't take good notes on them, and so cannot report on the other designs. As was the case in our group, the designs served to spark interesting discussions within and across groups on issues relating to health, data and technology. However, I was struck by a general theme that emerged (for me), which I believe was particularly well summed up in a recent Forbes article by David Shaywitz on Medicine's Tech Future, from last week's Future Med 2020 conference:

Our group was extremely fortunate to have good representation of both physicians and patients, as well as technologists and designers. In fact, if I had to select the highlight of all the highlights of the entire day, it was the discovery of an incredibly powerful visualization of a medical history timeline created by Katie McCurdy to use as a prop in discussing her chronic conditions in an initial interview with yet another new physician, and the confirmation by the physician in our group that this was, indeed, exactly the kind of prop that he and other physicians would likely find extremely useful in such a context.

At the end of the workshop, we discussed a number of ways we might move forward in the future. I think one of the most effective ways to move discussions - and designs - forward will be to ensure broader participation from patient and physician communities, perhaps organizing or participating in workshops associated with some of these other communities.

I also think that health applications offer a perfect context within which to organize unconferences to bring together designers, developers, patients, physicians and business folk. I participated in a civic hacktivism project at Data Camp Seattle last February, but the Hacking 4 Health unconference in Palo Alto in September 2010 is a more relevant example that might be emulated to help move things forward. The Health Foo Camp this past July offers another unconference event that might be of interest to those who want to continue designing for health, and anyone interested in participatory design in the context of health might also want to check out the Society of Participatory Medicine and their blog, e-Patient.net.

The main conference is about to start, so I want to wrap this up. I am very grateful to the workshop organizers - Jina Huh and Andrea Hartzler - for bringing us all together and providing the perfect level of structure for promoting engaging discussions and designs on a topic that is of such great interest to all participants, and I look forward to future opportunities to practice designing for health.

Update: I'm including a couple of related blog posts, in case they help facilitate links across communities interested in this area (these and other related posts can be found in the Health category of this blog):

Posted at 08:19 AM in Conferences and Workshops, Health, Research, Web/Tech | Permalink | 0 comments