I Am Because We Are: African Wisdom in Image and Proverb

We are all interconnected and we have responsibility for each other. 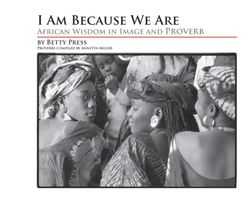 This is the interpretation of the Swahili word, ubuntu, offered near the start of a short, inspiring interview with photographer Betty Press by NPR Weekend Edition Sunday host, Audie Cornish two weeks ago. The interview focused on the incredible photographs celebrating the lives of people in Africa compiled over a 20-year period in a new book by Press, I Am Because We Are: African Wisdom in Image and Proverb. The NPR web page for the segment, A Photographer Changes The Focus In Africa, includes a selection of 7 of the 125 black and white photographs from the book. The images are striking, but given that this was a radio interview - on NPR, no less - I was a bit disappointed that, with the exception of the quote above, the proverbial dimension of African Wisdom was largely omitted from the segment ... and, well, talking about photographs is like writing about music ... which, of course, is like dancing about architecture.

Although I have never been there, I have been interested in Africa since inadvertently becoming an unofficial spokesperson for Nokia's efforts to empower people in developing regions with mobile technologies at PopTech 2007 (and several subsequent events). And as a technology guy, I have long interpreted ubuntu as a reference to a Debian-derived version of the open-source Linux operating system. I was intrigued, though not entirely surprised, to discover the origin of the term, which does seem well-aligned with the philosophy embodied by this evolving software artifact. So after learning more about the broader - and deeper - interpretation of ubuntu from Betty Press, my appetite was whetted for more examples of proverbial African wisdom to be revealed during the course of the interview.

Unfortunately, there were no further examples of proverbs offered on NPR - during the interview or on its associated web page - and while the book's web site offers a gallery that include additional photos, there are no examples of the proverbs in the book ... although the its proverbial aspects are highlighted in the following endorsement by Joanne Veal Gabbin on the main page:

A wise one said Proverbs are the palm wine with which words are eaten. Proverbs, like poems, are concise, loaded with metaphors, wisdom, nuance, and the rhythms of life…

At $39.95, this is not an inexpensive book (well, at least, not in my book), and I wasn't sure I wanted to make the investment. As much as I am moved by visual images, words are my primary source of inspiration. The book cover says "Proverbs compiled by Annetta Miller", and so I don't know if the division of labor is, in part, responsible for the primacy of images vs. words in nearly all the marketing materials (I cannot find a web page for Ms. Miller, but her bio suggests she has been involved in compiling other collections of African wisdom).

Having purchased and now received a copy of the book, I can attest to the captivating imagery contained in the photographs. Many of the proverbs of the book reflect wisdom that I've encountered in proverbs arising in American, European and/or Asian cultures - perhaps reflecting the universal nature of many of the most meaningful insights and experiences we share as human beings - but a few stood out as particularly poignant pronouncements of perspicacity. I wanted to help compensate for what I see as a deficit of attention to the proverbial wisdom in the book by sharing a few of my favorites:

The world is a mirror; it looks at you the same way you look at it. [North African proverb]

Our children are living messages sent to a future we may never see. [Nigerian proverb]

What you help a child to love is more important than what you help her to learn. [Sengalese proverb]

These last two are especially resonant, after having recently attended a David Whyte poetry reading, in which he and representatives of a local organization, Young Women Empowered, shared some proverbial wisdom about the importance of empowering [young] women and for the need for all humans to courageously speak out in the world. Whyte also spoke of embracing different forms of beauty, and the images and words in I Am Because We Are are a powerful illustration of beautiful forms that arise in the people and places of Africa.