A Compelling, Compassionate, Critique of Conservative Extremism by David Frum 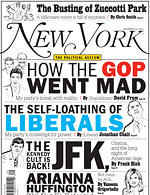 the [Republican] party is getting the big questions disastrously wrong

David Frum, former economics speechwriter for former U.S. President George W. Bush, offers a sharp critique of the Republican Party in an interview with NPR's Steve Innskeep yesterday, David Frum asks "When did the GOP lose touch?". The interview was prompted by Frum's recent article in the current issue of New York Magazine, which is impressive in its breadth and depth ... and, I would argue, its compassion.

I often feel incensed at some of the things I hear and read conservatives saying and writing. Frum's article helps provide some context for some of the perspectives presumably felt and sometimes articulated by some conservatives, but does so largely without being condescending. I'm reminded of one of the central tenets of non-violent communication: communication designed to induce fear, shame and/or guilt in a listener often arises from conscious or unconscious fear, shame and/or guilt on the part of the speaker. I'm also uncomfortably reminded of my own tendencies toward projection and rejection ... which are [also] reflected in the subtitle of Frum's article:

Some of my Republican friends ask if I’ve gone crazy. I say: Look in the mirror.

I highly recommend reading the entire article, and its complementary companion article by Jonathan Chait, who until recently was senior editor at The New Republic, How Did Liberals Become So Unreasonable (although frankly, I did not find Chait's article as compelling ... or compassionate). Here, I wanted share a few excerpts highlighting some key observations Frum makes regarding the rightward GOP shift(s).

Frum finishes off the article with a call for conservative moderates to speak up:

I refuse to believe that I am the only Republican who feels this way. If CNN’s most recent polling is correct, only half of us sympathize with the tea party. However, moderate-minded people dislike conflict—and thus tend to lose to people who relish conflict. The most extreme voices in the GOP now denounce everybody else as Republicans in Name Only. But who elected them as the GOP’s membership committee? 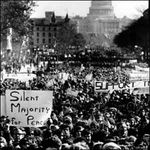 During this period of increasing protests against inequality and injustice - on Wall Street and other streets in America, as well as on streets and squares in Egypt and elsewhere around the world -  I'm reminded of earlier widespread protests against the Vietnam War ... and former Republican President Richard Nixon's claims during that period to be the spokesperson for what he called the silent majority, and his largely successful efforts to divide and polarize the American people ... and claims made by the more recently self-appointed Republican spokespeople of real Americans.

However, harking back to that earlier period of protest also reminds me of the wisdom of an inspiring liberal who, like Frum, [also] called for moderation in words and actions in the cause of promoting change: Dr. Martin Luther King, Jr:

History will have to record that the greatest tragedy of this period of social transition was not the strident clamor of the bad people, but the appalling silence of the good people.

Although Frum and King espouse different perspectives on the types of changes that are likely to lead to a greater Good, a vigorous, non-violent debate seems like the most likely course to lead toward improvements in politics and society.

Usability and confusability in Health IT: doctor-computer interaction vs. doctor-human interaction

A segment on the Marketplace Tech Report, Health care providers having trouble with new technology, caught my ear yesterday. The story included health and safety concerns raised by one of the authors of a 197-page report, Health IT and Patient Safety: Building Safer Systems for Better Care, published by the Institute of Medicine this week:

Dr. Ashish Jha, a professor at Harvard's School of Public Health and an author of this report as well says, "One of things that happened in Pittsburgh, in the pediatric ICU was that when the electronic system was put in, it really changed the way doctors and nurses interacted and the way they worked together. Physicians started spending a lot less time at the bedside and they were spending a lot more time staring at the computer screen, and interacting less with nurses and interacting less with patients. And there's a lot of information you pick up when you speak directly with people that when you go to purely electronic communication, you miss."

Two diametrically opposed possible explanations for the increased inattention of doctors to their human colleagues and customers (aka patients) came to mind:

After downloading and skimming the report [a pre-publication version of which is available as a free PDF], it appears that the latter explanation is most on point. Chapter 4 of the report, Opportunities to Build a Safer System for Health IT, includes observations, analysis and recommendations for usability, workflow and other human-computer interaction (HCI) issues involved in the design of effective Health IT systems. The report includes chapters on other topics involving information and technology (many of which incorporate elements of HCI), but it is encouraging to see such a strong human-centered focus on what is, by definition, a very human-centered domain. 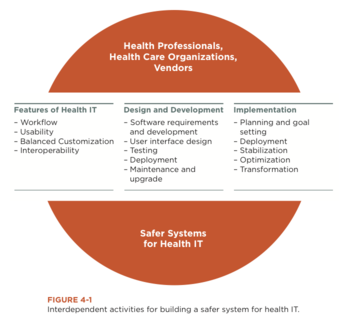 Among the observations shared by the committee who authored the report is a strident call for usability as a mission-critical factor:

The committee expressed concerns that poor [Health IT] usability ... is one of the single greatest threats to patient safety. On the other hand, once improved, it can be an effective promoter of patient safety. [emphasis added]

Among the relevant references they recommend for improving usability:

Unfortunately, I don't currently have the time to dig more deeply into the report or the wealth of references it cites (I have 75 midterm Operating Systems exams to grade in the next 36 hours). However, in my [re]new[ed] role as educator, I will be teaching a class on HCI next quarter and am pondering how I might indulge my increasing interest in computer supported cooperative healthcare and find ways of focusing on healthcare issues as a stimulating and worthwhile problem domain for undergraduate students learning about HCI.

Having recently read a compelling NYTimes article on Why Science Majors Change Their Minds (It's Just So Darn Hard) - which emphasized the increasing importance of design, projects, problem solving and social service to motivate students studying Science, Technology, Engineering and Math (STEM) - I'm eager to put some of these ideas into practice.

[Update: The New York Times has a related article on doctor-computer interaction, which focuses on the distraction caused by highly engaging IT devices and services that are not designed specifically for healthcare: As Doctors Use More Devices, Potential for Distraction Grows (found via a post on Distraction at Josephine Ensign's "Medical Margins" Blog).]