Reflections on Connections: A Review of Connected, the Film 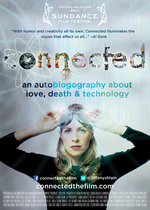 Watching the recent Seattle premiere of Connected: An Autoblogography about Love, Death and Technology, a documentary directed by Tiffany Shlain, I experienced a cascading and interconnected series of thoughts and emotions evoked by this loving tribute to the intellectual and emotional influence that her late father, Leonard Shlain, had on his family and the world at large.

The film, which opened at the Varsity Theatre on Friday night (and is only slated for one week), starts out with an inspiring quote by John Muir, a naturalist with a clear vision of interconnectedness:

When you tug at a single thing in the universe, you find it's attached to everything else.

Shlain goes on to tug at a number of interrelated themes throughout the film, including personal experiences with life-changing events involving cancer, pregnancy, birth and death, as well as more general topics such as brains, alphabets, honeybees and evolution. Many of these topics were inspired by the life and work of her father, a surgeon who authored three books about interconnectedness that are now on my Amazon Wish List: Art & Physics, The Alphabet vs. the Goddess and Sex, Time and Power.

Two of the most interesting intellectual insights I gleaned from the film are the connections between brain hemisphere dominance and sexual dominance, and a broader view of technology as an evolutionary process. Shlain - and I'm being intentionally ambiguous here, because the film reflects the views of both father and daughter - suggests that the creation of an alphabet for communication enhanced the relative value of the brain's left hemisphere (responsible for logic and reason) over the right hemisphere (concerned with aesthetics and relationships) in human affairs. Since men tend to be left brain dominant and women tend to be right brain dominant, the growing prominence of left brain processing led to a growing dominance of men over women. Recent technological developments such as the Internet and social networking services increasingly enhance the prominence of relationships, and thereby help promote a resurgence of right brain processing and the consequent elevation of the role of women.

In a separate but related thread, Shlain describes technology as any tool that extends our capability and influence. The film includes a quote on technology by Albert Einstein:

It has become obvious that our technology has exceeded our humanity.

The film expresses a technological optimism, espousing a perspective in which technology, by definition, extends our humanity. During earlier stages in human evolution, growing brains gave hominids a growing evolutionary advantage. Eventually, the brains of homo sapiens reached a maximum size, beyond which the birthing of big brained babies would risk the sacrificing of their mothers. To maintain dominance, homo sapiens has increasingly found innovative ways of utilizing external resources to complement our fixed-sized brains, and so the relentless march of technological developments can be seen as a natural and unavoidable byproduct of human evolution.

That is not to say that all technological developments are good. We have developed technologies that can destroy humanity, and the world as we know it. But developing new technologies is simply part of being human, so the question is not whether or not we will continue to develop new technologies, but rather what capabilities do we want to enhance, and what kind of influence do we want to exert on the world.

While the film was intellectually stimulating on many levels, I found the emotional impact to be even stronger. At the outset of the Q&A session immediately following the film, Shlain seemed almost apologetic about the personal nature of the story she shared about her father, and the insights he developed and shared about various dimensions of interconnectedness. I believe the personal intensity she brought to the endeavor is what gives the story its incredible power, demonstrating the timeless wisdom of another visionary who understood interconnectedness, psychologist Carl Rogers:

What is most personal is most general.

Based on his portrayal in the film, Leonard Shlain appears to have had a profound impact on his family, and his battles with cancer motivated him to consciously renew his devotion to his family.

I recently received a handmade birthday card from my daughter that suggests that my influence on her life may be more significant than I'd imagined (and thankfully, mostly positive). I don't expect that my life and work will have the level of influence that Leonard Shlain achieved in his lifetime, but the card was a reminder of the influence I have had ... and the film offered a welcome opportunity to reflect on the kind of connections I want to cultivate with my family, as well as with my friends, colleagues, students and others I encounter, offline and online.