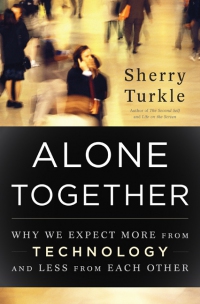 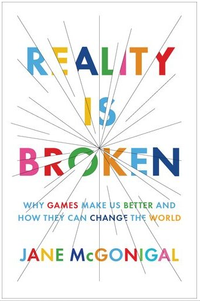 Two of the most interesting and provocative books I've encountered recently are Alone Together: Why We Expect More From Technology and Less From Each Other, by Sherry Turkle, and Reality is Broken: How Games Can Make Us Better and How They Are Changing the World, by Jane McGonigal. I have not finished reading either book, but I've read numerous articles and reviews about both books, and my general impression is that Alone Together expresses concern that our increasing focus on virtual interactions is draining, depleting and distracting us from our real-world interactions, whereas Reality is Broken espouses the belief that the time we spend playing online games can renew and revitalize us and perhaps even lead us to redirect our energies toward solving real world problems.

Turkle is not proposing that we abandon all - or even most - of our technologies, but that we become more conscious of our choices about interacting with and through machines vs. interacting face-to-face with other humans. She warns that

Borrowing some of the language and insights shared by Brene Brown's TEDxHouston Talk on Wholeheartedness, I would characterize Turkle's book as inviting us to be more willing to lean into the discomfort of real-world interactions and embrace the courage, vulnerability and authenticity needed for meaningful connections with people IRL (in real life).

As technology increasingly co-inhabits more of our physical spaces - and inhabits increasingly human-like or animal-like robots in our midsts - we need to develop a more disciplined approach in balancing our online and offline interactions. During her January 17, 2011 interview with Stephen Colbert, Turkle summed this up by saying "we have to put technology in its place".

McGonigal offers a more positive perspective on the value of online interactions. In a Wall Street Journal article on The Benefits of Videogames (adapted from her book), she implicitly questions whether we ought to lean into discomfort of real life, and promotes the embrace of the relatively friction-free engagement more readily available in online games.

Gamers want to know: Where in the real world is the gamer's sense of being fully alive, focused and engaged in every moment? The real world just doesn't offer up the same sort of carefully designed pleasures, thrilling challenges and powerful social bonding that the gamer finds in virtual environments. Reality doesn't motivate us as effectively. Reality isn't engineered to maximize our potential or to make us happy.

However, while McGonigal advocates the benefits of gaming and online interactions, she does not turn her back on real life. During her February 3, 2011 interview with Stephen Colbert, she noted studies showing that "the emotions we feel in games spill over into our real lives", and describes a game, Evoke, that she designed to promote the creation of social enterprises to solve real world problems such as poverty and hunger in sub-Saharan Africa.

I recently posted some slides I used for a guest conversation on human-robot interaction in a human-computer interaction course at the University of Washington, Tacoma, which reference Alone Together and Reality is Broken, as well as a number of other ideas and perspectives on the topics of interacting with humans vs. robots and online vs. offline.

After tweeting a link to the slides, I followed up with another tweet: 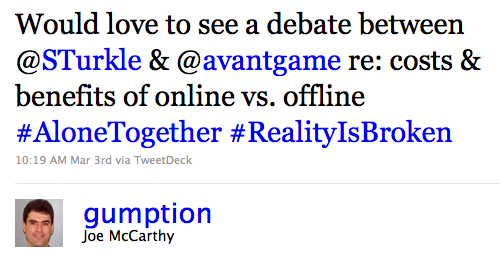 Shortly thereafter, the current issue of ACM interactions magazine arrived, reminding me about a Social Media forum that I now edit in the magazine, which may offer an ideal venue in which to host a debate between these two inspiring authors. In my introductory article - which appears in the current issue (Bridging the Gaps between HCI and Social Media, which is now available online) - I wrote about my intention to use the forum to reflect the conversational nature of social media, and to bring together short and potentially conflicting contributions by multiple thinkers and doers on topics of interest to the HCI community.

I'm hoping I can convince Sherry Turkle and Jane McGonigal to participate in an upcoming forum, as I think the insights and experiences they offer would be of great interest and benefit to the ACM interactions community. If you agree that this would be a worthy endeavor, please feel free to tweet a link to this post and CC @STurkle and/or @avantgame.