The Code for America Seattle fellows organized Data Camp Seattle, a day-long unconference / hackathon in collaboration with Socrata and the City of Seattle on Saturday. The event brought together city leaders, neighborhood leaders, technologists and [other] civic-minded individuals and groups to share ideas, data and tools, and to build or improve applications to promote civic awareness, engagement and well-being.

The day started with a brief overview of Code for America by the CfA Seattle fellows, Chach Sikes, Alan Palazzolo and Anna Bloom. Code for America is an organization that pairs web designers and developers (fellows) with city governments to create web applications that promote more openness, transparency, efficiency and effectiveness in the provision of services by the hosting cities. In 2011, four cities - and 20 fellows - were selected in a competitive application process; other CfA 2011 cities are Boston (with 7 fellows), Philadelphia (7) and Washington, DC (3). Anna described the focus of the CfA 2011 Seattle fellows as connecting local leaders to solve civic problems.

Chach introduced a number of representatives from the City of Seattle who were attending the event. Neil Berry, with the Seattle Open Data team, told us that his team offers over 100 location-encoded datasets at data.seattle.gov, including information on crime statistics, building permits and neighborhood boundaries. Bill Schrier, CTO/CIO of Seattle (aka Chief Seattle Geek, @BillSchrier), emphasized the collaborative investment made in CfA Seattle by the City of Seattle, EsrI and Microsoft, and the early & ongoing support for the broader initiative by Tim O'Reilly. He described the goal of CfA Seattle as transforming data into useful information & applications.

Chris Metcalf, Technical Program Manager and Developer Evangelist at Socrata, where the event was hosted (and which paid for our lunches), described the company as providing software as a service (SaaS) for governments of all levels and sizes, from 5,000-citizen townships to the federal government. Among their services is a Web-based API for [open] government data, and among their clients is the City of Seattle (Socrata hosts data.seattle.gov).

Among the other participants introduced during the opening session were 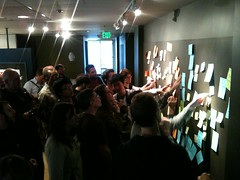 After the introductions, Alan brought out post-it pads and markers, and Chach announced that we would have 5 minutes to write down things we want to share (on the yellow and orange post-its) and things we want to learn (on the blue and green post-its), and then post them on a wall. We would then have 5 minutes to cluster the things people want to share and learn into common themes or topics, to facilitate the formation of unconference breakout sessions. Leaders were recruited for each cluster, we split into smaller discussion groups in smaller rooms, and brief reports were given just before lunch. Notes from the sessions - on the South Park neighborhood, mobile damage assessment apps, transit apps, mobile / geolocation apps, data mining, information visualization - were posted to the DataCampSEA Google Group. I joined the session on mobile geolocation apps, led by Aaron & Amber, and my notes from the session can be found at the link above.

After lunch, a number of prospective projects were proposed (many of which had been suggested during the introductions), and we again split off into smaller groups, but this time with the goal of designing and developing rather than - or in addition to - discussing applications. I joined Aaron, Amber and others to design and develop a mobile geolocation app that would enable users to subscribe to events or event types from Seattle city event calendars (and, eventually, other geocoded event sources) and be notified via SMS whenever they were within 500 meters of the event site within an hour of the start of the event. Obviously, there are a lot of important details to be worked out for a full-fledged application for performing this task, but we were able to make considerable headway on an application over the course of a little over 3 hours. 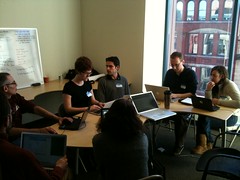 We quickly came up with a name for the application - HearNear (the idea being that your phone "listens" for events of interest nearby) - and self-organized into different tasks: 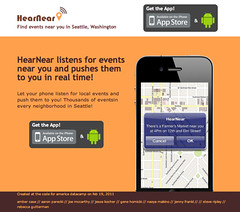 I have probably mis- or undercharacterized much of the work done by all the other people on the team, as I became increasingly engrossed in my relatively small role in working out the iCal -> GeoLoqi translations during the session. In any case, it was pretty amazing how much the team accomplished in such a short period of time! Amber has posted a number of photos of the HearNear application - and development effort - on Flickr, one of which I've included at the right. There were a number of other new and/or improved applications worked on other groups during the afternoon, but my note-taking energy was pretty low by the end of the day, so I'm hoping that those developments will be captured / represented elsewhere.

I wasn't sure what to expect going into the event, but was greatly impressed with the interactions, overall experience and outcomes at Data Camp Seattle. I've admired the Code for America project since first learning about it, and have been a proponent of open data and platform thinking (and doing) on my blog. It was inspiring and empowering to have an opportunity to do more than simply blog about these topics ... though I recognize the potential irony of writing that statement in a new blog post about these topics.

I suspect that one of the most durable outcomes of the Code for America project will be this kind of projection or radiation of civic empowerment through - and beyond - the efforts of the CfA fellows and their collaboration partners. In The Wealth of Networks, Yochai Benkler writes about how "[t]he practice of producing culture makes us all more sophisticated readers, viewers, and listeners, as well as more engaged makers". In Program or Be Programmed, Doug Rushkoff warns against "relinquishing our nascent collective agency" to computers and the people who program them by engaging in "a renaissance of human capacity" by becoming programmers ourselves.

While many - or even most - of the specific applications we designed and developed during the Data Camp Seattle civic hackathon may not gain widespread traction and use, if the experience helps more of us shift our thinking - and doing - toward becoming co-creators of civic applications - and civic engagement - then the Code for America project will have succeeded in achieving some grand goals indeed.

[Update: Alex Howard (@digiphile), of O'Reilly Media, has also written a summary of the event.]

Posted at 02:32 PM in Conferences and Workshops, Teaching and Learning, Web/Tech | Permalink | 0 comments