Fitting in vs. Belonging: The Costs and Benefits of Conformity 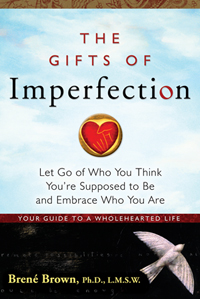 A while back, I wrote about Brene Brown's inspiring TEDxHouston talk on Wholeheartedness as connection through courage, vulnerability and authenticity. I have since read her most recent book, The Gifts of Imperfection: Let Go of Who You Think You're Supposed to Be and Embrace Who You Are, and was so moved by her insights that I have added it to my "top 10" books on the right column of this blog. As with most of the books on that list, I won't attempt a review of the entire book in one post, but will [continue to] tap into on themes from the book in various contexts. In this post, I want to explore the distinction Brown makes between fitting in and belonging, and how that distinction relates to other themes I've read, thought and/or written about recently with respect to personal and professional growth.

The inclusion of belonging in the first list and the inclusion of fitting in on the second list immediately jumped out at me, as I had previously thought of these two terms as synonymous. A little further on, Brown notes that she was [also] surprised at the distinction, and offers definitions for the two terms:

Fitting in is about assessing a situation and becoming who you need to be to be accepted. Belonging, on the other hand, doesn't require us to change who we are; it requires us to be who we are.

She goes on to define belonging in more detail:

Belonging is the innate human desire to be part of something larger than us. Because this yearning is so primal, we often try to acquire it by fitting in and by seeking approval, which are not only hollow substitutes for belonging, but often barriers to it. Because true belonging only happens when we present our authentic, imperfect selves to the world, our sense of belonging can never be greater than our level of self acceptance.

In one of several guideposts she shares for learning how to be more courageous, vulnerable and authentic, Brown champions the idea of letting go of comparison, which she describes as being all about conformity and competition.

The comparison mandate becomes this crushing paradox of "fit in and stand out!" It's not cultivate self-acceptance, belonging and authenticity, it's be just like everyone else, but better.

The conflict between wanting to fit in and wanting to stand out appears to be yet another manifestation of the tension between agency and communion that lies at the heart of the stories we make up about ourselves, a topic I wrote about a few weeks ago. As I reflect on those ideas in this context, it occurs to me that conformity could be defined as adhering to the stories that others make up about us. 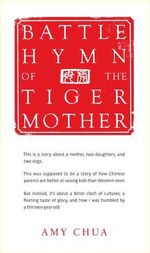 This conflict also seems to lie at the heart of the controversy surrounding a recent article in the Wall Street Journal, Why Chinese Mothers are Superior, excerpted from a new book by Amy Chua, Battle Hymn of the Tiger Mother. While Brown writes about the gifts of imperfection, Chua writes about the gifts of perfection. Citing a study of American and Chinese immigrant mothers, Chua notes that

the vast majority of the Chinese mothers said that they believe their children can be "the best" students, that "academic achievement reflects successful parenting," and that if children did not excel at school then there was "a problem" and parents "were not doing their job." ... Chinese parents can say, "You're lazy. All your classmates are getting ahead of you."

Chua offers three distinctions between the American and Chinese style of parenting, which reflect the expectation of [some] Chinese parents that children will conform to their parents' idea of who they should be by standing out from their peers in areas the parents deem important:

The article - and book - has triggered intense debate.

Charlotte Hilton Andersen responded with an article in the Huffington Post on The Question No One is Asking in the Tiger Mom Debate: Is achievement really the best measure of success? She goes on to share several examples of the high costs that conformity to parents' ideals has extracted from some famous child prodigies - including penury, profligacy and prostitution - and reports that the suicide rate among Asian-American women aged 15-24 is the highest of any race or ethnic group in that age range.

Ayelet Waldman, a Jewish-American mother and author of Bad Mother: A Chronicle of Maternal Crimes, Minor Calamities and Occasional Moments of Grace, offered a defense of the guilty, ambivalent, preoccupied Western mom in a followup article in the Wall Street Journal. Waldman's response is well-balanced and compassionate, expressing admiration for some of the positive elements of parental perseverance, guilt and regret for not always doing the best she might have done, but also proposing a more nuanced approach in which a child's individual needs are prioritized: "our job as mothers is to be the type of tigress that each of our different cubs needs".

Chua modulates her tone a bit in her own WSJ followup article, The Tiger Mother Talks Back, acknowledging the importance of love, compassion and willingness to make individual adjustments based on children's special needs. She also emphasizes that the book was intended as a description rather than a prescription, written as a memoir rather than a how-to manual. I have not read her book, but based on others' reviews, I suspect that the excerpted chapter or section was intentionally provocative, and that the book itself offers a somewhat more balanced perspective on parenting.

Turning from parenting to business leadership - roles I see as having many common themes - the issue of fitting in vs. belonging was an implicit theme in my review of the recent book by John Hagel, John Seely Brown and Lang Davison, The Power of Pull: Institutions as Platforms for Individual Growth. As the authors note in their book:

Large organizations have traditionally tended to promote conformity, and to treat employees as standardized parts of a predictable machine, who suppress their intrinsic creative instincts in return for extrinsic rewards. Although the tactics employed by managers in most large organizations to encourage conformity are not as drastic as those employed by Amy Chua - e.g., the explosive episode of parenting pressure she describes in encouraging her daughter to play her piano piece correctly - they reflect a similar underlying premise: we know what is best [for you].

However, if one believes that innovation is more likely to occur at the edges than the core of an organization, and be practiced by people who are taking risks rather than conforming to written or unwritten rules, then the cost of conformity is to sacrifice innovation, and the benefits of innovation will accrue to those organizations that are willing to embrace non-conformity ... or perhaps even anti-conformity.

Few large organizations are willing or able to embrace - or even accept - non-conformity, much less anti-conformity. This is why many large organizations attempt to import innovation via acquisitions ... and why so few innovators stay on with their acquiring benefactors beyond the point at which their stock options vest ... and why so few imported innovations turn out to be sustainable.

Reflecting on Brene Brown's ideas, I suspect this corporate emphasis on conformity (and comparison and competition) is also why so few employees of large organizations are willing to be courageous, vulnerable and authentic in their work[places] ... and why so many employees feel so disengaged. Looking back at her "Do" and "Don't" list, I believe that the "Don't" list aligns more closely with most employees' experience in the workplace ... which may explain why wholeheartedness is more the exception than the rule in most workplaces.

John Hagel (@jhagel) recently tweeted a link to a provocative and compelling video on the topic of Conformity by YouTube video artist/scientist TheraminTrees, who weaves together a number of interesting and informative studies on our tendency to conform. One image in the video, in particular, reminded me of Brene Brown's ideas about wholeheartedness, authenticity ... and fitting in vs. belonging: 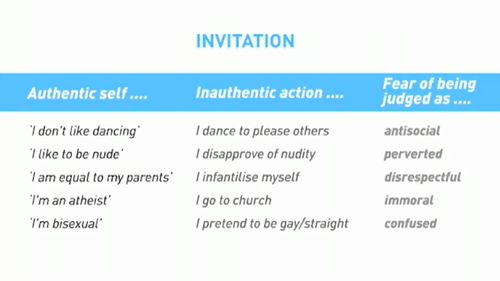 I highly recommend watching the entire video, but for the benefit of those who might not have the time or inclination to do so, I'll include a brief synopsis below the embedded video.

The narrator starts off with a definition of conformity as "behaving in accordance with real or imagined social norms, rules and expectations". He goes on to share a number of interesting studies from psychology and neurology about our tendency toward conformity in our perceptions, actions and judgments. Acknowledging that conformity can work for us - providing structure, predictability and helpful conventions - or against us - leaving us vulnerable to the tyranny of group opinion and the loss of authentic self - he warns that "we give up a lot more than we know". To guard against the costs of conformity, he offers four recommendations:

This invitation to be willing to disappoint people reminds me of one of the most inspiring prose poems (and books) I've ever encountered - The Invitation, by Oriah Mountain Dreamer - and so I'm going to leave the last words on conformity to her:

It doesn’t interest me
if the story you are telling me
is true.
I want to know if you can
disappoint another
to be true to yourself.
If you can bear
the accusation of betrayal
and not betray your own soul.
If you can be faithless
and therefore trustworthy.