Home Archives Profile Subscribe
Reflections on Reviews, Rebuttals and Respect
Academia Redux: Joining the Institute of Technology at the University of Washington, Tacoma

The Stories We Make Up About Ourselves 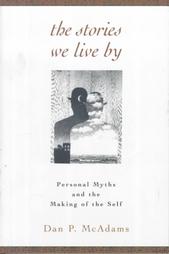 Several years ago, I read a book by Dan P. McAdams on narrative psychology, describing identity as a personal myth we create in order to construct a sense of meaning, unity and purpose in our lives. In The Stories We Live By: Personal Myths and the Making of the Self, McAdams argues that we consciously or unconsciously compose a heroic narrative that integrates our remembered past, our perceived present and our anticipated future in a way that illustrates essential truths about ourselves. For much of the past year, I've been wrestling with a revision to the story I make up about myself, as I iteratively recalibrate my self perceptions in response to the feedback I've received from others. Throughout this time, I have been increasingly reminded of McAdams' insights - and becoming aware of other related insights - and thought it might be helpful (at least to me) to compile some of them here.

According to McAdams' story, storytelling is not just a way for us to make sense of ourselves, it is the primary vehicle through which we communicate with others. Stories provide a way for others to make sense of us - "what's your story?" - and a way for all of us to make sense of the world ... which may help explain why our predilection for primary sources of stories - e.g., Fox News vs. MSNBC - can lead to such radically different perspectives of reality.

One of the most valuable insights I gleaned from the book was McAdams' discussion of human motivation. Some theories posit a single, grand motive that explains why we do the things we do, whether that motive be religiously inspired or more secular in nature (e.g., Carl Jung's notion of self-actualization). Other theories propose a panoply of potential impulses that prompt our behavior (e.g., William James' list includes fear, sympathy, sociability, play, acquisitiveness, modesty, nurturance and love). A middle way casts motivation as a fundamental conflict between two opposing forces, e.g., power and love, or agency and communion. I've encountered this dualistic tension in my own experience and in a wide variety of other accounts of human behavior (e.g., intrinsic vs. extrinsic motivation and acceptance, striving and interdependence), and this characterization by McAdams really resonates with me.

Power and love are the two great themes of myth and story. Protagonists and antagonists are striving, in one way or another, to do one or both of these two basic things: (1) to assert themselves in powerful ways, and (2) to merge themselves with others in bonds of love, friendship and intimacy. ... Characters in stories [desire] to expand, preserve and enhance the self as a powerful and autonomous agent in the world, and to relate, merge and surrender the self to other selves within a loving and intimate community. ...

This motivational duality in human existence is probably best described by the psychologist David Bakan, who distinguishes between agency and communion. According to Bakan, agency and communion are the two "fundamental modalities in the existence of living forms", organizing a great variety of human wants, needs, desires and goals. Agency refers to the individual's striving to separate from others, to master the environment, to assert, protect and expand the self. The aim is to become a powerful and autonomous "agent", a force to be reckoned with. By contrast, communion refers to the individual's striving to lose his or her own individuality by merging with others, participating in something that is larger than the self, and relating to others in warm, close, intimate and loving ways.

McAdams proceeds to offer a timeline for how the stories we make up about ourselves tend to develop throughout the arcs of our lives: childhood, adolescence, adulthood, middle age and the later years. As we age, we have increasingly more fodder for our stories ... and a keener awareness of the importance of the stories that - we hope - will eventually outlive us: "good lives, like good stories, require good endings". We want to live not only a memorable life, but a memoirable life.

To a large extent, the good life is justified by the good story. And the good life story is one of the most important gifts we can offer each other.

For those who are concerned about crafting memoirable accounts of their lives, McAdams identifies six features that are present in good identity stories: 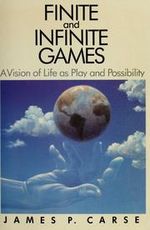 A recent post by Valeria Maltoni on ConversationAgent reviewing 3 books on leadership, a vision of life as play and acting on what matters includes a brief summary of James Carse's Finite and Infinite Games: A Vision of Life as Play and Possibility, a generative and inspiring book that I first read when it was published in 1986. I periodically re-read the book during different life chapters, each time finding new insights that speak to my new context. In re-reading it this time, after being prompted by Valeria's post, I came upon a quote that also speaks to the power and generativity of stories ... and storytellers.

True storytellers do not know their own story. What they listen to in their poiesis [creative activity] is the disclosure that wherever there is closure there is the possibility of a new opening, that they do not die at the end, but in the course of play. Neither do they know anyone else's story in its entirety. The primary work of historians is to open up all cultural termini, to reveal continuity where we have assumed something has ended, to remind us that no one's life, and no culture can be known, as one would know a poiema [artifact, or product of creative activity], but only learned, as one would learn a poiesis. [79]

Great stories cannot be observed, any more than an infinite game can have an audience. Once I hear the story, I enter into its own dimensionality. I inhabit its space at its time. I do not therefore understand the story in terms of my experience, but my experience in terms of the story. Stories that have the enduring strength of myths reach through the experience to touch the genius in each of us. But experience is the result of this generative touch, not its cause. So far as is this the case that we can even say that if we cannot tell a story about what happened to us, nothing has happened to us. [95] 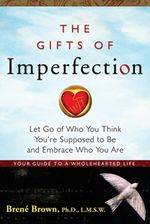 I first encountered McAdams' book (first published in 1993) while reading and reviewing Sam Gosling's book about the story our stuff tells about us - Snoop, an investigation into possessions, perceptions, projections and personalities - in 2008. More recently, I viewed and wrote about Brene Brown's TEDxHouston talk on Wholeheartedness: connection through courage, vulnerability and authenticity, and started reading the associated book - The Gifts of Imperfection: Let Go of Who You Think You're Supposed to Be and Embrace Who You Are - in which she talks about the importance of not just composing but embracing our stories:

If we want to live fully, without the constant fear of not being enough, we have to own our story.

I was also inspired by a recent tweet by Seb Paquet,

The stories we tell ourselves can serve as straitjackets for stagnation, or scaffolding for transformation.

This confluence of stories - and microstories - about the power of stories, coupled with own struggle with stagnation and transformation, prompted me to revisit McAdams' book, and share some of the insights he shares about narrative psychology.

Returning to The Stories We Live By, toward the end of the book, McAdams offers a roadmap for identifying, living and perhaps even changing our personal myths, based on the intimate interviews he and his colleagues have conducted over the years. The central element of his approach is interpersonal dialogue: the telling of one's story to a sympathetic listener, a witness who is willing and able to be enthusiastic, affirming and nonjudgmental (someone I would call a speed dial friend). The Life Story Interview process [available online] involves the elicitation of life chapters, key scenes, future script, challenges, personal ideology, life theme and reflection. I have not participated in this full and formal process (yet), but do plan to delve into some of these issues in an upcoming post about the latest life chapter I am currently drafting.