The Power of Pull: Institutions as Platforms for Promoting Individual Passions 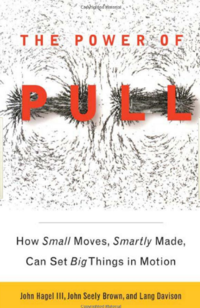 There are a number of interesting and provocative ideas in The Power of Pull, by John Hagel III, John Seely Brown and Lang Davison. I've already tweeted about a number of articles by the authors - based on their book - that highlight the importance of physical places, the ways we can shape serendipity and the essence of leadership as connecting people with similar and complementary passions. Here I will focus primarily on what I see as one of the most radical ideas in the book:

When I first read this passage (on page 8), I was excited about encountering another example of platform thinking. However, I also thought that it was extremely idealistic, and even though I tend to be extremely idealistic, I was very skeptical about applying this idea to the business world ... or at least aboiut its prospects for realization.

Having also recently read Douglas Rushkoff's book, Life Incorporated: How the World Became a Corporation and How to Take It Back, I came to understand the history of the corporation as an entity designed for extraction, exploitation and externalization, existing for the primary benefit of shareholders who often have no stake in the actual work done by the corporation or its employees. I believe many corporations today - as well as many other organizations (and individuals) that Rushkoff argues have adopted a corporatist perspective - exhibit these behaviors, but as many investment offerings warn: past performance is not a reliable indicator of future performance.

In The Power of Pull, these engines of extraction are described as "push" organizations, with centralized decision-makers utilizing top-down approaches to forecast demand and supply passive consumers with products and services. Employees of such organizations are treated as standardized parts of a predictable machine, who suppress their intrinsic creative instincts in return for extrinsic rewards, resulting in a "curious combination of boredom and stress".

However, the authors argue that a Big Shift is underway, where knowledge and power is devolving from large, centralized and stable "stocks" toward smaller, decentralized and uncertain "flows". This shift is being propelled, in part, by technology, and is increasingly disrupting economics and politics and the traditional institutions that participate in these domains. Organizations that have succeeded through achieving scalable efficiency will increasingly need to promote more scalable learning, which will call for a new set of perspectives and practices.

Many of these perspectives and practices will flourish along the edges rather than at the core of organizations:

This shift of focus - and prospects for value creation - from the core to the edge will require new approaches:

Rather than trying to pull the edges into the core, as many management pundits recommend, the key institutional challenge will be to develop mechanisms to pull the core out to the most promising edges.

And the best way to pull the core of an organization toward its edges is to more fully draw the core potential within individuals to the surface(s), which can only be done by tapping into their passions and creating a trusting environment in which they are continually willing to stretch themselves toward the edge - or, ideally, beyond the edge.

To build this level of trust, we must begin the process of reintegrating ourselves, and often, in the process, rediscovering ourselves, so that we can present ourselves more fully and authentically to others around us. ... It requires us to get in touch with ourselves, to relearn how to be, in order to more effectively become.

The authors conclude with a compelling vision for integrating the personal with the professional: as institutions evolve to provide "platforms individuals to amplify the power of pull", we will have "the ability to shape a world that encourages and celebrates our efforts to become who we were meant to be". As I said at the outset, this is an incredibly idealistic perspective, but having finished the book, I'm more willing to believe in the prospect of its realization ... or as David Whyte might put it, its incarnation.

The poetry of David Whyte - who also often writes about flows - came to mind at several times during my reading of this book, and this passage at the end reminded me of one of my favorite poems, Working Together, which he wrote to commemorate the presentation of The Collier Trophy to The Boeing Company marking the introduction of the the advanced 777 widebody twinjet. I'm not sure where Boeing stands on the push vs. pull spectrum, but their willingness to hire David Whyte, who was described by former CEO Phil Condit as "a storyteller, someone from outside our system saying that there are other ways of looking at the way we do things" - very much in the spirit of The Power of Pull - leads me to suspect that they may be more open to transformation than some other large institutions. In any case, the poem seems like an appropriate ending for this post.

We shape our self
to fit this world
and by the world
are shaped again.

The visible
and the invisible
working together
in common cause,
to produce
the miraculous.

I am thinking of the way
the intangible air
passed at speed
round a shaped wing
easily
holds our weight.

So may we, in this life
trust
to those elements
we have yet to see
or imagine,
and look for the true
shape of our own self
by forming it well
to the great
intangibles about us.