Home Archives Profile Subscribe
Joni Mitchell: Woman of Heart and Mind, Strength and Vulnerability
The Stories We Make Up About Ourselves

Reflections on Reviews, Rebuttals and Respect

Having recently served as associate chair for both the CSCW 2011 and CHI 2011 Papers & Notes Committees, I've read a large number of papers, an even larger number of reviews, and a slightly smaller number of rebuttals. In participating in back-to-back committees, a few perspectives and practices that impact the process of scientific peer review have become clearer to me, and I wanted to share a few of those here. I believe all of these boil down to a matter of mutual respect among the participants, and wanted to delve more deeply into some resources that offer guidelines for respectful practices.

I want to start out with a brief review of The Four Agreements, by don Miguel Ruiz, as I believe they provide a strong foundation for how to best approach the review process, as well as other areas of life and work (and I'll include links to earlier elaborations on three of the four agreements):

I see examples of these agreements being violated throughout all aspects of the review process. Reviewers say hurtful things about authors, their work and/or their papers in their reviews and/or online discussions. Some reviewers appear personally offended that authors would have the audacity to submit a paper the reviewers judge to be unworthy. Many reviews reflect implicit or explicit assumptions the reviewers are making about the paper, the work described by the paper, and/or the authors who have written the paper. Some reviews are so short that I have a hard time believing that the reviewers are really doing their best in fully applying their skills and experience to help us make the best possible decision on a paper (but I acknowledge this is an assumption). 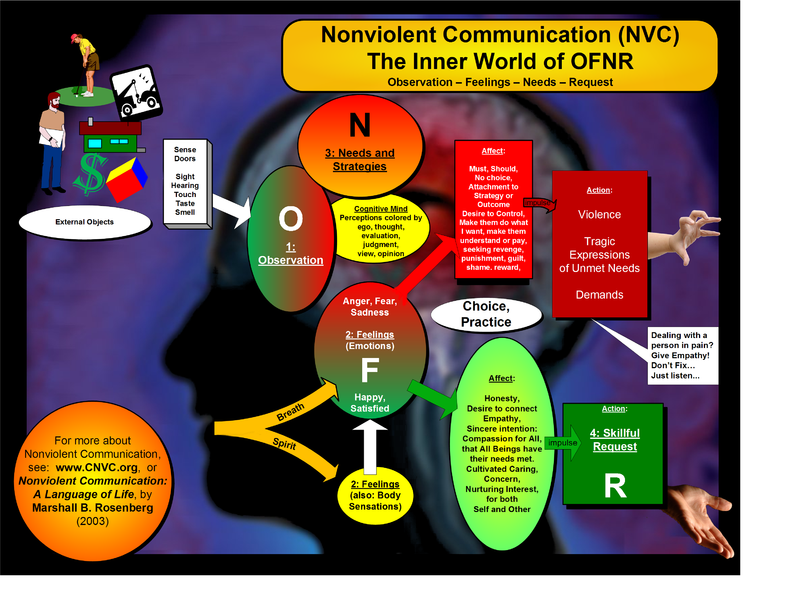 Another framework that I believe is helpful to apply in this context is nonviolent communication (NVC), which is predicated on the assumption that everything we do is an attempt to meet our human needs, that conflict sometimes arises through the miscommunication of those needs, and that further conflict can be avoided by refusing to use coercive or manipulative language that is likely to induce fear, guilt, shame, praise, blame, duty, obligation, punishment, or reward. The Wikipedia entry for nonviolent communication offers four steps (that are very similar to some earlier distinctions I'd written about between data, judgments, feelings and wants):

Drawing on both of these sources for inspiration, ideally, a well-written review would have the following characteristics:

The rebuttal process also offers an opportunity for applying these practices. I won't go into as many details about the rebuttals, but I will say that if there was a category for "best rebuttal" (along the lines of "excellent reviews" and "best paper awards"), I saw two rebuttals among the papers we discussed that were outstanding exemplars of effective rebuttals. These had several factors in common:

I also witnessed some angry rebuttals, some of which included disparaging remarks about the committee and/or the conference community, none of which had any positive influence on the ultimate decision made on those papers. I won't go into any further details, as I do not believe that would be constructive. However, I would encourage all authors to wait at least 24 hours after they recieve their reviews to even start composing their responses, as I believe this will lead to a more constructive engagement.

Due to the desire to respect confidentiality agreements, I won't disclose any specific reviews or rebuttals from the CSCW or CHI conferences as positive or negative examples, but I will conclude with a few rather extreme examples of negativity - which are so extreme they are humorous - in a blog post on Twisted Bacteria about peer review of scientific papers:

There are several more examples of violations of The Four Agreements and the principles of nonviolent communication available at Twisted Bacteria, and I'm grateful that the reviews I've seen (and written) in the CSCW and CHI communities do not reflect the extreme expressions found in this selection from the environmental microbiology community.

I hope that highlighting some of the more positive and constructive approaches one might take to peer reviewing (and rebutting) will promote a more mindful, respectful and effective process for all participants.