Joni Mitchell: Woman of Heart and Mind, Strength and Vulnerability 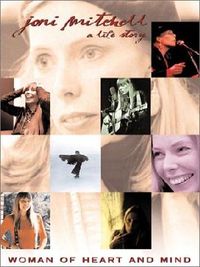 I've always been impressed with the incredible range of Joni Mitchell's music - her voice, guitar virtuosity and the different genres she has explored - but after watching a documentary about her life and work, I have a whole new level of appreciation. In fact, I watched the video - Joni Mitchell, Woman of Heart and Mind: A Life Story - three times in two days ... and see many other parallels with another inspiring video I watched three times in two days: Brene Brown's TEDxHouston talk on wholeheartedness: connection through courage, vulnerability and authenticity.

I've been experiencing a long series of dark nights of the soul recently, and so am perhaps even more drawn toward - and inspired by - expressions of courage, vulnerability and authenticity than I might be under normal conditions ... whatever normal might be (or become) at this point. I don't seem to be able - or willing - to muster the gumption to delve very deeply into my own darkness at the moment, and so will continue hovering near that edge while sharing some notes on others who are more willing to reveal (and release) their shadows.

The documentary offers a rich blend of Joni Mitchell's music along with interviews with her and many of the people who know or knew her at various stages her career. After various contributors provide background information about her - she was born in Maidstone, Saskatchewan, had polio at age 9, wanted to be a painter, attended Alberta College of Art and began to sing in a coffee house in Calgary called the Depression - Joni shares one of many illuminating insights:

Although as a painter I had the need to innovate, as a musician it was just a hobby. I didn't think I had the gift to take it any further than that.

She goes on to share her some details of her [initial] descent:

I lost my virginity and got pregnant, and entered onto the "bad girls" trail, which was a trail of shame and scandal, and I had to kinda hide myself away ... I was living a lie, and felt like I'd been betrayed ...It was very difficult for me, and so I began to write. I think I started writing just to develop my own private world, and also because I was disturbed ... I feel, every bit of trouble I went through, I'm grateful for ... Bad fortune changed the course of my destiny. I became a musician.

Her willingness to be courageous, vulnerable and authentic in her music - bringing all of who she is to her art - created the connection that so many people have felt. As novelist, journalist and singer Malka Marom puts it:

She sang it so real, so true, as if she was singing for me. She was my voice, you know? She was everybody's voice. She was like a universal voice. ... She lives with a great respect for this mystery, and with an openness, inviting this mystery. This is her great strength. Because I think it requires tremendous strength to really believe in something that you cannot put your finger on.

But this vulnerability comes at a cost, as Joni notes:

During the making of Blue, I was just so thin-skinned and delicate, that if anybody looked at me I'd burst into tears. I was so vulnerable and I felt so naked in my work.

My individual psychological descent coincided, ironically, with my ascent into the public eye. They were putting me on a pedestal and I was wobbling. So I took it upon myself, since I was a public voice, and was subject to this kind of weird worship, that they should know who they were worshiping.

I was demanding of myself a deeper and greater honesty. More and more revelation in my work, in order to give it back to the people, where it nourishes them and changes their direction, and makes light bulbs go off in their head, and makes them feel, and it isn't vague, it strikes against the very nerves of their life. In order to do that, you have to strike against the very nerves of your own.

After delving into the depths in music, she finds release in painting:

Any time I make a record, it's followed by a painting period. It's good crop rotation. I keep the creative juices going by switching from one to the other, so that when the music or the writing dries up, I paint. You rest the ear a while and you rest the inner mind, because poetry takes a lot of plumbing the depths. I mean, the way I write, anyway, it takes a lot of meditation. Without the painting to clear the head, I don't think I could do it.

And then after a painting period, she's ready to plumb the depths in and through music again:

It's been a very kind of subjective, I guess you'd say, journey. Subjective but, hopefully, universal. That was always my optimism - that if I described my own changes through whatever the decade was throwing at us, that there were others like me. And it turns out that there were.

I highly recommend watching the video, for both the additional commentary by illuminating luminaries who were involved personally and/or professionally with Joni - e.g., Graham Nash, David Crosby and James Taylor - and, of course, for the scenes of Joni performing her incomparable music (many of which can be found in the Video Library on her web site):