I've watched this video on Wholeheartedness by Dr. Brené Brown from TEDxHouston (last June) several times since I first saw it tweeted by John Hagel (@jhagel) yesterday morning. It is one of the most inspiring talks I've seen, making all kinds of connections about connection and disconnection and a range of other core issues I perpetutally struggle with. I'll embed the 20 minute video below, and highly recommend watching the original source, but will also share a few notes I've jotted down from her talk below.

After talking about how she resisted the insights she'd gleaned from six years of social work research involving thousands of personal stories and hundreds of in-depth interviews - because the insights were in direct opposition to the holy grail of science: control & prediction - Dr. Brown eventually became willing to lean into the discomfort of the work, and acknowledge that

vulnerability is the key to joy, creativity, belonging and love

She encountered a glaring contradiction among many of the stories:

She elaborates on the feeling of shame (reminding me of the 12-step slogan "we're only as sick as our secrets"):

Is there something about me, that if other people know it or see it, that I won't be worthy of connection? It's universal, we all have it ... no one wants to talk about it, and the more you don't talk about it the more you have it.

Partitioning the population into In two types of people - those who have a strong sense of worthiness and those who do not - she found an almost tautological distinction:

The people who have a strong sense of love and belonging exhibit the following characteristics:

Those who do not believe themselves worthy of belonging also share some common characteristics:

She finishes off with a prescription for wholeheartedness:

Several of these insights resonated with wisdom shared by other inspiring teachers:

This last resonance, in particular, offers a measure of discomfort, as I reflect on having written about Oriah and Buber, I and Thou: Bringing All of Who I Am to Blogging several years ago, and realizing that I have not always succeeded in that goal. This was made all the more poignant earlier today, when I encountered a blog post by Alyssa Royse, in which she models uncommon courage, vulnerability and authenticity in describing her experience of - and response to - a pair of eerily similar recent and not-so-recent traumatic incidents. Perhaps my own pair of encounters with wholeheartedness shared by these women during the past two days will prompt me to practice greater vulnerability and authenticity.

Dr. Brown has written several books, and as a researcher interested in psychology and sociology - and someone who generally falls into the "unworthy of love and belonging" camp (but wants to switch sides) - I plan to delve more deeply into her research and findings.

For now, however, I'll wholeheartedly conclude with an expression of gratitude at having been exposed to this work, and while I am not ready to assert that I am enough, I am willing to write that I have written enough ... for now. 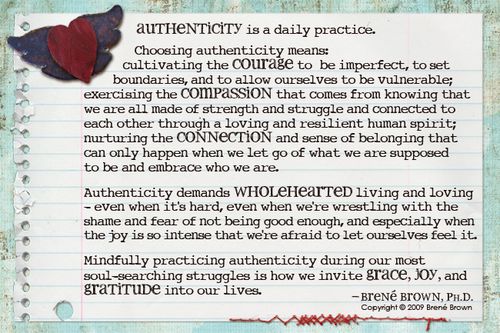 [Update: I've since read - and blogged about - Brene Brown's book, The Gifts of Imperfection: Fitting in vs. Belonging, The Costs and Benefits of Conformity. Similarly inspiring & highly recommended.]