I recently read an article in GOOD magazine, Are Cell Phones the Cigarettes of the 21st Century?, which I initially misinterpreted. When I read the title on Twitter (@GOOD), it evoked an image of people using mobile phones instead of lighting up cigarettes during periods of boredom or high stress. It turns out the article is actually about the potential health hazards of mobile phone use, but I'm going to proceed with my aforementioned misinterpretation, as it aligns well with a few other things I've read and thought about recently.

During my four years as a smoker, one of the things I most enjoyed about smoking was that it gave me a diversion: something to do when I might otherwise have felt awkward about not having something to do. Rather than doing nothing - or worse, looking like I didn't have anything to do - I could light up a smoke, and suddenly have something to do. Actually, I'd suddenly have several things to do: get out my pack of cigarettes, extract a cigarette, pull out my matches or lighter, light the cigarette, spend several minutes smoking, and then extinguish the cigarette.

I quit smoking long ago, but the collocated references to cigarettes and cell phones in the GOOD article evoked the memory of my old diversionary tactics, and a recognition that my iPhone is my new diversion of choice. Like smoking, my iPhone offers me several things to do: I can check for new email, texts or tweets, check-in on Foursquare or other location-based social networking applications, or play [other] games when I'm in a situation where I consciously or unconsciously don't want to risk standing out by doing nothing.

I started wondering whether mobile phones might offer a sufficiently satisfying diversion in the same kinds of contexts that others might otherwise light up a cigarette, and whether that is leading to habit substitution. That is, does the increase use of mobile phones result in a reduction in smoking rates? I couldn't find a direct answer, but found some potentially relevant studies.

In a 2002 study appearing in the journal of Psychology of Addictive Behaviors, Situations and Moods Associated with Smoking in Everyday Life [PDF], David Shapiro and his colleagues found that situations positively associated with smoking included "being in a car, outdoors or on a work break; while waiting, being with friends, or being with others who are smoking; after consumption of alcohol or food; or while standing up". 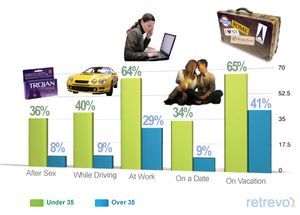 I don't know of any study of situations and moods associated exclusively with mobile phone use in everyday life, but a 2009 Retrevo study on How Addicting is Social Media? reported the situations in which people most often tweet / text / check Facebook. The study showed that there are significant numbers of people under 35 who connect with one (or more) of these social media streams while on vacation (65%), at work (64%), driving (40%), on a date (34%) and after sex (36%). I don't know the extent to which these social media check-ins are substituting for vs. supplementing cigarette smoking, but perhaps there is some non-trivial proportion of people who fall into the former category, especially as it seems that such check-ins are increasingly socially acceptable, while the social acceptability of cigarette smoking is on the decline (at least among some populations).

I found another study reporting that the decline in teen smoking rates during the first half of this decade appears to have stalled during the second half. This stall in teen smoking rates happens at a time when the percentage of U.S. teens who have a mobile phone has risen from 45% in 2004 to 71% in 2008. Another study of teens found a "40 percent higher association between hyper-texting and trying cigarettes" (where hyper-texting is defined as spending more than 3 hours a day sending or receiving texts). So, at least for teens, the increased use of mobile phones does not appear to be correlated with a reduction of smoking, but I think it would be very interesting to study the correlations - and potential causal relationships - between smoking and texting in greater depth.

One final observation I want to make on the topic of mobile phones, cigarettes, diversions and health is the social differences between smoking and texting (or other mobile social media interactions). When I was a smoker, smoking was a very social practice: smokers would routinely share matches and/or cigarettes, and asking for a light or a cigarette often served as a conversation catalyst. The physical exchange of flame or tobacco seemed to promote social exchanges among the participants in a shared smoking session. I don't know how social smoking is today, but I suspect that the decreasing societal acceptance of smoking may actually serve to strengthen the social bonds among smokers.

The use of mobile phone, though, sometimes seems to act as more of a barrier than a bridge to social interactions with others who share our spaces. People who use mobile phones to maintain constant connection with their online networks often tune out the people around them, using their devices as portable interaction shields (as Keith Hampton and Neeti Gupta describe them in their study of Community and Social Interaction in the Wireless City).

In a recent Psychology Today article urging users to Take a Time Out from Technology, Brett Kennedy makes a connection between mobile devices and transitional objects, and warns of potential adverse health impacts:

Pediatrician and Psychoanalyst, Donald Winnicot coined the phrase "transitional object" to describe the phenomenon of infants attaching to various objects (plush toys, blankets, etc.) that serve to provide comfort as they come to terms with their own individuality while confronting the anxiety caused by separation from their primary caretaker. ... For those who struggle with separation and individuation, the transitional object becomes a hindrance to movement forward and the object becomes a liability. ... The objects of our modern affection (IPads, IPhones, Blackberries, smart phones, etc.) are used often and everywhere impacting our face-to-face time with others and distracting us from being alone with ourselves.

There are health benefits associated with spending face-to-face time with others, and with learning to be alone with ourselves (e.g., through meditation), and despite concerns raised by others, there are also health benefits associated with online social networking. I don't know of any studies that examine the relative health benefits of online vs. offline social networking, but given the increasing attention to online vs. offline attention (and distraction), this seems like another interesting topic for further study.