Last night, on the Colbert Report, near the beginning of the segment on Fear for All, Part I, host Stephen Colbert announced the new Rally to Restore Sanity and/or Fear app for the iPhone (also available in the Android store).

The app was developed by MTV Networks for the upcoming combined Rally to Restore Sanity (instigated by The Daily Show's Jon Stewart) / March to Keep Fear Alive (instigated by Colbert) in Washington, DC, this Saturday, an event that has received considerable attention over the past few weeks on Comedy Central, Fox News and other traditional and new media outlets (though the rally will apparently not be receiving any direct attention from National Public Radio). 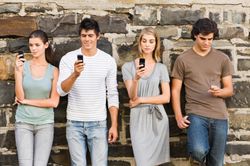 If you're going to the rally, well, there's an app for that ... It's really cool! You can use the app to get directions to the rally, check-in on Foursquare, post photos to Facebook and Twitter, and you get a special video message from Jon [Stewart] and me on the morning of the rally. This app will truly enhance your rally experience, because nothing brings people together like ignoring each other to stare at their phones. [emphasis mine]

These "features" for enhancing physical world experiences reflect the tensions I recently wrote about regarding the Starbucks Digital Network and its impact on engagement and enlightment on physical world "third places". Although I have not precisely measured it, I have perceived an increasing trend of people standing or sitting together in Starbucks and becoming ever more effective at ignoring each other by staring at / typing on their phones (or laptops), and I predict less physical world engagement will result from the greater online engagement provided by this new location-based network. This may not be universally seen as a "bug" by all, but I have been encouraged to read others urging a shift of attention from the online back into the offline, such as Lewis Howes' recent post predicting the offline shift is coming, and John Hagel and John Seely Brown's recent article in Harvard Business Review proclaiming the increasing importance of physical location.

Malcolm Gladwell has also addressed the relative tradeoffs between online and offline engagement, touching off a firestorm of controversy in a New Yorker article criticizing online social networks such as Twitter and Facebook and their impact on social activism in the physical world: Small Change: Why The Revolution Will Not Be Tweeted.

The Rally to Restore Sanity, however, is more about resolution than revolution:

We’re looking for the people who think shouting is annoying, counterproductive, and terrible for your throat; who feel that the loudest voices shouldn’t be the only ones that get heard; and who believe that the only time it’s appropriate to draw a Hitler mustache on someone is when that person is actually Hitler. Or Charlie Chaplin in certain roles.

The March to Keep Fear Alive is, of course, also intended to promote reasonableness, though employing the kind of parody traditionally used by Colbert in drawing attention to the fear that is regularly promulgated through other media channels:

America, the Greatest Country God ever gave Man, was built on three bedrock principles: Freedom. Liberty. And Fear — that someone might take our Freedom and Liberty. But now, there are dark, optimistic forces trying to take away our Fear — forces with salt and pepper hair and way more Emmys than they need. They want to replace our Fear with reason. But never forget — “Reason” is just one letter away from “Treason.” Coincidence? Reasonable people would say it is, but America can’t afford to take that chance.

I will not be present at the rally / march in Washington, DC, but I may attend the Rally to Restore Sanity in Seattle. In any case, I will be tuning in to the main rally  /march remotely - perhaps using my iPhone - to see how the resolution or revolution will be tweeted.

Update, 2010-11-16: Perhaps due to the fact that the only commercial TV I watch with any regularity is the Comedy Central "news" hour - The Daily Show and The Colbert Report - and even those I typically watch via buffering on my DVR to skip commercials, I was not aware of the Microsoft Windows Phone ad campaign launched earlier in October that promotes the theme of phone-based obsessive-compulsive disorder that Colbert is alluding to. While I like the video, I don't see how this would motivate people to buy Windows Phones (say, instead of iPhones or Androids), but perhaps the goal was simply to draw some attention to Windows Phone. In any case, I'm embedding the Windows Phone "Really" advertisement below.

And finally, just for good measure, I'll embed what I see as the classic short video in this genre, Crackberry Blackberry (though I do not believe this was ever used as a marketing tool by Research in Motion). Interestingly, it was prefaced by yet another Windows Phone ad when I watched it just now.