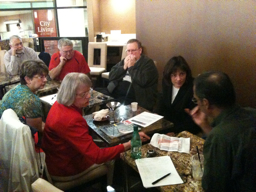 Two local Coffee Party groups - from Redmond and Renton / SE Lake Washington - organized a meeting with Suzan DelBene, the Democratic candidate for Washington's 8th Congressional District, at Vovito Caffe & Gelato in Bellevue last week. A dozen or so people participated in a civil and engaging conversation with the candidate about a range of important civic matters during the one-hour event. Some of the participants became quite animated about some of the issues they were raising, but all those present abided by the Coffee Party civility pledge, and so articulated their positions with passion and respect. The upshot is that I came away with a keener appreciation both for the candidate and the process of civil, honest and respectful political discourse.

Suzan began with a brief overview of her background, motivations and goals for seeking the 8th Congressional District seat currently held by Republican Dave Reichert. She was born in Alabama, attended Reed College, and has held leadership positions in a variety of organizations of different sizes and orientations - a large corporation (Microsoft), two for-profit startups (Drugstore.com and Nimble Technology, the latter of which was spun out of the University of Washington) and a non-profit promoting micro-financing in Latin America (Global Partnerships). She wants to apply her business and entrepreneurial experience to the problems facing the 8th district and the country as a whole.

Having experienced the effects of her father losing her job when she was in 4th grade, Suzan has first-hand experience with the challenges that arise during periods of unemployment. I was inspired by her emphasis on the importance of not just creating economic opportunities (jobs), but creating meaningful opportunities -jobs that promote a sense of pride, dignity and confidence, as well as foster community and leadership - reminding me of some entrepreneurial wisdom shared by Guy Kawasaki on making meaning vs. making money.

One of the first questions was how to address the unfair advantage large corporations seem to have over small businesses with respect to political influence and access to financial capital. Suzan acknowledged that the financial system is broken, and emphasized the prime importance of stabilizing the system. Referencing the book, The Fortune at the Bottom of the Pyramid: Eradicating Poverty through Profits, she suggested that we need to find more ways to make more capital - and opportunities - available to people at lower levels of the pyramid, e.g., through reducing the tax burden on small business and increasing the flow of money to community banks. She commended the Small Business Jobs and Credit Act (H.R. 5297) signed into law by President Obama two weeks ago - after Congressman Reichert voted against the bill in the House [Suzan didn't mention this, but I looked it up] - as a positive step in that direction.

We also discussed health care, and there seemed to be general agreement that we still need to move forward with [further] health care reform. Suzan observed that the Patient Protection and Affordable Care Act of 2010 was more about health insurance reform than health care reform, expanding access but falling short of the cost containment requirements to ensure long-term stability of the health care system. She also expressed support for a position that I (and others) strongly believe in: health care is a right, not a privilege.

Suzan mentioned a local company, Qliance, that is taking a new, more entrepreneurial approach to providing health care by providing incentives that are more appropriately aligned with achieving positive health care outcomes. Qliance members pay a $75 monthly fee (on average) for unlimited access to a primary care clinic, and with no extrinsic monetary incentives for ordering additional tests or requiring additional clinic visits - in contrast to the pay-per-procedure incentives that pervade the predominant health insurance system - doctors are more focused on successful treatment (and prevention) than successive treatments. In briefly skimming the Qliance pages, it appears that there may be significant gaps outside of the realm of primary care in the overall coverage (e.g., "prescription medications, laboratory tests and outside services such as x-ray interpretation" ... and, I imagine, hospitalization), but it does seem to offer a promising possible alternative.

The conversation then shifted to education, and Suzan expressed a preference for President Obama's Race to the Top program over former President Bush's No Child Left Behind program - comparing them to a carrot vs. a stick - but noted that charter schools (which are not [yet] allowed in Washington State) are disproportionately favored in the RTTT point system. Having served as CEO of Nimble Technologies, a startup that spun out of University of Washington research, she is also a strong proponent of funding basic research. More generally, she observed that we need to shift our thinking (and acting) from the short-term to the long-term, focusing less on spending and more about investing.

The last topic we discussed was campaign finance reform. Suzan said she disagrees with the U.S. Supreme Court decision in Citizen United v. Federal Election Commission, which struck down campaign spending limitations that had been imposed on corporations. She mentioned state initiatives such as the Clean Elections Act in Maine, which has served as a model for subsequent campaign finance reform initiatives in other states, and the Fight Washington Corruption campaign ("Democracy for the other 98% of us") initiated by MoveOn.org. She supports greater transparency in political campaigns.

This emphasis on transparency, combined with her entrepreneurial approach to problems, and her proposal that "we need more leadership and less followership" reminded me of Tim O'Reilly's concept of government as a platform, and the application of platform thinking to government, health care, education and science. Although Suzan is a Democrat, many of the views she articulated struck me as more libertarian than liberal, and more pragmatic than ideological ... and she doesn't appear to see government as the sole or even primary solution to our problems.

I do not live in Washington State's 8th Congressional District, and so I cannot vote for Suzan, but many aspects of her experience and perspective resonate with me, and I am grateful for the chance to learn more about her beliefs and goals. I also want to express my gratitude to the other Coffee Party members and supporters, as well as to our gracious hosts, Ariff and Shairose Gulamani, Alex Negranza and the rest of the staff at Vovito Caffe & Gelato (who, like the Coffee Party, support civil discourse and the democratic process but do not endorse any political candidates).

Finally, I want to note that a recent poll suggests that DelBene is gaining on Reichert, and I hope this will provide greater incentive for Reichert to reverse his refusal to debate her ... as I think we all benefit from more opportunities to engage in - and/or observe - civil discourse on civic matters.