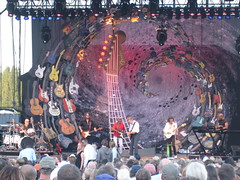 We saw Steve Miller Band in our first concert of the 2010 summer season at Chateau Ste. Michelle on Wednesday night. CSM summer concerts tend to include a preponderance of rock stars from the 60s and 70s, some of whom are looking, sounding and performing better than others, so many decades after their heydays. Steve Miller is definitely one of those who is still faring well after all these years. His voice, guitar playing and showmanship are still going strong, and he had a good band - and a number of special guest stars - to accompany him.

He played one long set, with one encore in which he responded to audience requests. Despite our efforts to get him to play Your Saving Grace, he responded to louder requests for Jungle Love (or, as at least one particularly loud requester was referring to it, "Chug-a-lug"). Surprisingly to me, throughout most of the concert, the keyboardist also provided the bass lines. The backup guitarist played bass guitar on a few songs, but it was mostly keyboards throughout (not that I would have noticed if I hadn't seen the players assembled on stage).

As is so often the case at these oldies but goodies (and not so goodies) concerts at CSM, I think SMB could have provided far more opportunities for audience sing-alongs. He did invite us all to sing the refrain during Space Cowboy, but I'm often surprised at how little beloved musicians are willing to engage their long-time fans in a more participatory experience ... especially fans like me who used to play his songs in an amateur rock band years ago. I'm sure the music quality is higher with the professionals performing, but I suspect the people known as the "audience" would welcome more opportunities to share more prominently in the music-making. 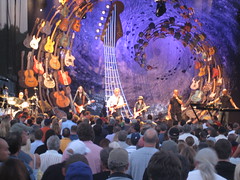 Among the highlights of the concert were

Here's the set list, as best as I can read my scrawled notes from the concert:


Update, 2010-07-27: Just read about ThingLink's photo tagging service; trying it out on a larger version of the first photo above. Mouse over / click on people in the image to see who's who.