Home Archives Profile Subscribe
The "Boopsie Effect": Gender, Sexiness, Intelligence and Competence
All models, studies and Wikipedia entries are wrong, some are useful

Paro, Personal Robots, Emotional Intelligence and the Need to be Needed

Paro is a personal robot that looks like a baby harp seal and responds to changes in light, sound, temperature and touch. Research and development in artificial intelligence has traditionally focused on linguistic, logical or mathematical intelligence, although robotics has also involved the quest for imbuing machines with spatial and kinesthetic intelligence. Paro, however, seems designed more to embody emotional intelligence. And I would argue that the secret superpower of Paro is its ability to evoke emotions and address our fundamental need to be needed.

I recently heard an NPR interview with Amy Harmon about her NY Times article on Paro, A Soft Spot for Circuitry, in which recounted a number of interesting responses from Millie Lesek, an elderly woman who cared for Paro in a nursing home. Paro was first presented to Mrs. Lesek by a staff member who said she needed someone to babysit the robotic pet. Mrs. Lesek was happy to fulfill that need, forming a special bond with Paro, and eventually developed a stronger sense of being needed: “I’m the only one who can put him to sleep”.

Some researchers referenced in the article express concern about substituting a robot for a person - or a real pet - in relationships. However staff members at another retirement home noted that Paro tends to facilitate human interactions when other people are present (the way that real pets often do) rather than replace them. And when family, friends or staff are not - or cannot be - present, using a machine to evoke emotional responses and elicit a feeling of being needed seems like a powerful therapeutic tool ... with far less care and feeding required than real pets. 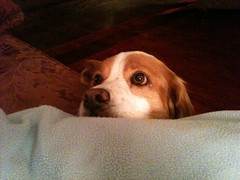 I've long nursed a pet theory that the primary therapeutic benefit people derive from pets is not so much that our pets love us, but that we can love our pets ... with far less fear of the rejection we risk in loving other people. That is, it's the expression or giving of love rather than the receiving of love that really opens up the heart - and promotes other emotional and physiological benefits. Reading the article about Paro, I'm inclined to revisit and revise this theory. Perhaps it's not just loving someone - human, animal or robot - that makes us feel complete, it is the [perception of] being needed by someone we love that helps us feel like we matter ... like our life has purpose.

The band Cheap Trick was also on to this back in 1977, with a somewhat less scholarly expression of this basic need:

Returning to a more scholarly thread, the Turing Test was proposed in 1950 as a way to determine whether a machine was intelligent. The idea was to have a human interrogator in one room, and a computer and another human in another room, communicating only via written or typed questions and answers. If the interrogator was unable to differentiate which respondent was the machine and which was the human, the machine would be said to have achieved human-level artificial intelligence.

Paro, however, represents an attempt to achieve embodied intelligence, which could not, by definition, be tested using a scheme in which the machine is isolated from the human interrogator. It is clear from Harmon's article that many of the people who interact with Paro do not believe that Paro is a real baby seal, and I don't know whether they would ascribe much logical intelligence to it, but I do suspect, based on the responses elicited from many of those who interact with it, that it is well on its way to demonstrating significant emotional intelligence.