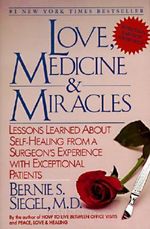 Years ago, I was surprised to read about a doctor - Bernie Siegel - advocating that people undergoing medical treatment be bad patients. In his 1986 book, Love, Medicine and Miracles: Lessons Learned about Self-Healing from a Surgeon's Experience with Exceptional Patients, the surgeon urged his fellow doctors to view themselves as privileged listeners - rather than mechanics - in the context of a healing partnership through which both parties exercise dual control and teach each other. Among his recommendations for bad (or exceptional) patienthood:

At the time, I remember experiencing a cognitive dissonance between the word "patient" - which implies a passive recipient - and the more active role suggested in the "exceptional patient" approach. I read the book shortly after my wife was diagnosed with multiple sclerosis, during a period in which we consulted several different doctors with widely varying attitudes toward patients, views on treatment regimens, estimates of probable health trajectories and predictions of prospects for bearing and raising children. Fortunately, my wife was - and is - an exceptional patient, we had good health insurance, and we eventually found a great neurologist (James Donaldson, at the University of Connecticut Health Center, who specializes in multiples sclerosis and the neurology of pregnancy) with whom to partner.

Amy's relentlessly active engagement with all medical treatment providers and careful attention to her health and the health of all her family members has served all us exceptionally well. I believe her activist attitude has been an important factor in the successful management of the M.S. over the past 25 years, during which time she has found and worked with a series of doctors (we've moved several times), raised two children and endured a marital relationship with me. Her steadfast determination to fully understand all aspects of her care was more recently demonstrated throughout her anal cancer diagnosis and treatment (for which we recently celebrated her 5th anniversary). We have been fortunate to be covered by mostly good health insurance and treated by mostly outstanding medical professionals over the years, but I know others have not been so lucky.

Last week, I was both captivated and disturbed by Regina Holliday's story of her and her family's trials and tribulations in engaging with the health care system to treat her late husband's kidney cancer. I didn't even see her presentation at the Health 2.0 Conference, but her poignant Patient 2.0 slides led me to her Medical Advocacy Blog, where her inspiring words and art filled in the gaps of the narrative. As I briefly mentioned in my post on Platform Thinking, De-Bureaucratization and the Redistribution of Agency - which included Regina's story and a few other highlights of Health 2.0 - I was once again struck by the growing obsolescence of the word "patient", and the need for a new term that better reflects the participatory nature of our relationships with medical experts.

In her excellent summary of the conference, A Matter of Perspective, Regina shares some insights that really drive this point home. She observes the prevalence of patient participants throughout the conference - patient advocates, patient representatives, patient speakers. - and notes how many of these participants were standing rather than sitting, concluding: "sometimes you just can’t sit still and wait for change".

So rather than sit still and wait for a change in terminology, I decided to do some research, and see if I could propose one or more alternatives, and/or get others to participate in the process. In looking around for previously proposed alternatives, I came across a November 1999 article in the British Medical Journal (BMJ) asking "Do we need a new word for patients?" [available via free registration].

Julia Neuberger, former chair of the Patient's Association (among many other roles), argues that we do need a new word, via an acknowledged overstatement of the disadvantages of the term:

Patient comes from the Latin “patiens,” from “patior,” to suffer or bear. The patient, in this language, is truly passive—bearing whatever suffering is necessary and tolerating patiently the interventions of the outside expert. The active patient is a contradiction in terms, and it is the assumption underlying the passivity that is the most dangerous. It is that the user of services will remain passive in sickness, allowing the healthcare professional to take the active part and tell the user what to do. The passive patient will do what he or she is told, and will then wait patiently to recover. The healthcare professional is the healer, while the recipient of healthcare services is the healed, and does not need to take a part in any decision making or in any thinking about alternatives.

In addition to the dangers in over-relying on the treaters (doctor) and under-relying on the treated (patients), she goes on to observe that many interactions between healthcare professionals and those seeking care occur outside the context of a specific disease, and focus more on activities of daily living and potential lifestyle changes that do not require medical intervention. She enumerates, and points out shortcomings with, a number of alternatives - "user", "client" and "consumer" - and after highlighting the transactional nature of the latter two, settles on "user" as the least objectionable among them. Personally, I find it rather difficult to imagine doctors and other healthcare professionals referring to the people currently known as "patients" as "users", and lean toward "client" as the least objectionable option.

In the second section of the article, Dr. Raymond Tallis argues that if it is not necessary to change something, it is necessary not to change it, and goes on to suggest that none of the following criteria are met:

His criteria may be biased by his role as a physician (at that time); to balance things out, I would add a fourth criterion, and put it at the top of the list:

After consideration of "consumer", "customer" and "health seeker" (which may be more appealing / apropos with the recent release of a new HealthSeeker Facebook game by the Diabetes Hands Foundation), he appears to find "client" the least objectionable alternative. Tallis claims that that "Most linguistic reforms reflect rather than bring about changes in attitudes", and offers the example of the adoption of "Ms" as a marital status-neutral title for women which has had little effect. I disagree with this general perspective, and believe that the linguistic manipulations of Frank Luntz - who succeeded in reforming attitudes through shifts in terminology in the cases of "global warming" vs. "climate change", "estate tax" vs. "death tax" , and "third trimester abortion" vs. "partial-birth abortion" - offer powerful counterexamples.

Now, I don't meant to imply that doctors and patients are equals with respect to knowledge of medical conditions and treatment options. We seek out doctors explicitly for their considerable knowledge and experience - and ideally, for their clinical wisdom, which also involves compassion, creativity and honesty. However, just as the use of Ms establishes more of a peer-to-peer platform for a conversation, I think a similar leveling of relationship might be achieved with a rephrasing of the references to people seeking health care treatment or advice ... if only we could find a good new word.

Several people posted "rapid responses" to the 1999 article, many of whom were doctors, and most of which responded to words proposed by one of the two commentators. A few offered other terms - "medusers" or "sickies" - which they also dismissed, and one suggested we look at other languages for cues (though noting that Welsh and French terms both imply "one who is sick", and so did not represent improvements). One respondent included a link to a study in the Medical Journal of Australia asking "Patient, client or customer?", which reported

[a study of] 308 outpatients at John Hunter Hospital, Newcastle, NSW, and concluded that over 80 per cent of all patients approached, and over 90 per cent of those above 60 years of age, preferred the term "patient" over "client" or "customer".

Taking a cue from a blog post by e-Patient Dave on a poll for renaming the Consumer Health Data Initiative - initiated by Todd Park, CTO of the U.S. Department of Health and Human Services - during the Health 2.0 conference, I thought I'd experiment with another UserVoice poll to see whether those who are following Health 2.0 are more supportive of a change in terminology, and perhaps more importantly, determine what term(s) we would prefer to use. The criteria I would propose for the new word would be the following:

Please participate by voting and/or adding new words to the Rename Patient poll, and encouraging others who may be interested in this issue to do so as well. And if you have any other ideas to contribute to the overall discussion - including references or links to other relevant articles or blog posts I haven't included - please feel free to post comments below. Thanks!