The keynotes on Day 1 of the Web 2.0 Expo in San Francisco exposed a number of common threads, perhaps best summarized by a quote attributed to Tim O'Reilly by conference co-chair Sarah Milstein:

We're trying to maximize the surface area of serendipity.

The official theme of the event is "Platforms for Growth", and all of the keynotes so far have included observations and insights into the kind of platform thinking and its often unintended - and primarily positive - consequences that Tim and various friends of O'Reilly have been espousing and practicing for some time now.

I'm not actually at the conference but have been following it remotely through the web20tv LiveStream. However, I've been taking lots of notes, and will condense them into a coherent collection below, augmented by links and other embeddable goodies when I can find them. I'll link each of the speaker's names to their profile on the Web 2.0 Expo site, which has slides and videos of their talks. 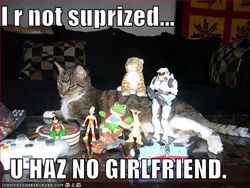 Ben Huh, CEO of the Cheezburger Network, spoke about how providing platforms for people to promulgate humor - such as LOLcats, FAIL blog and There, I Fixed It - has resulted in 19,000 submissions per day, 15 million views per month and an immeasurable impact on mutual inspiration and the wealth of networks. He contrasted the construction of Internet culture - a bottom-up process involving hackers, software, subversiveness and co-created and occasionally co-opted meaning - with popular culture - a top-down process that has brought us sitcoms, evening news and Geraldo Rivera. Perhaps due to the humorous nature of the content shared on Ben's platforms, or the occasional dropouts in the live webcast, at one point I wasn't quite sure if he was extolling the virtues of cloud computing or clown computing ... and this prompted additional musing during his talk about other approximate anagrammatical homophones such as subversiveness vs. subservience, and conservative vs. conversative, as well as Victor Borge's quote "Laughter is the shortest distance between two people." 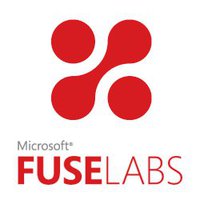 Lili Cheng, General Manager of Microsoft's Future Social Experiences (FUSE) Labs, demonstrated three new web applications created by her team as they confront the challenges of timeliness, unpredictable growth, experimental systems and quality data. Bing Twitter, announced at the Web 2.0 Summit in October, allows users to track trending topics and search for status updates on Twitter. Docs.com, announced at the f8 Facebook Developers Conference two weeks ago, allows Facebook users to share Microsoft Office documents on the web. The newest and most interesting app is Spindex, which Lili acknowledged was a "nerd name" for social personal index, and allows tracking of trending and subtrending topics that are popular among one's friends (her demo tracked trends of a mutual friend, Marc Smith, but I couldn't make out the actual content). Spindex and Docs are both in early beta / invitation-only mode, and Spindex currently requires a Windows Live ID for authentication (Docs requires Facebook authentication). I had previewed her Web 2.0 Expo Powerpoint slides earlier in the day, as they had shown up in her Facebook news feed, and I thought I'd beat the rush by submitting a request for an invitation. Unfortunately, I haven't received an invite code for Spindex , but I'm hoping to try them out soon.

Paul Buccheit, founder of FriendFeed, which was acquired by Facebook, was interviewed by Sarah Milstein, during which he described the recently announced Open Graph protocol as an attempt to simplify the development and use of Facebook applications. Paul championed the widespread provision of lightweight, spontaneous interaction gestures such as liking and quick and easy comments as a way to promote conversations and connections across the web. When asked by Sarah about whether the proliferation of such mechanisms would promote a larger number of ultimately shallower connections, Paul responded that they provide more context for future, deeper conversations to unfold. When asked who he admires, Paul responded that he just follows random links, noting he had just enjoyed reading a blog post by an author he hadn't heard of in a browser tab that he'd opened two weeks ago (reflecting one of my common practices).

June Cohen, Executive Producer of TED, shared the philosophy and practices of radical openness adopted by the organizers of the TED conference series. Despite their concerns about their conscious evolution from conference to media company to platform, their steadfast commitment to their core mission - "ideas worth spreading" - enabled them to progressively provide a model "platform for growth", and she said that all of the unintended consequences have been explosively positive. Noting that taped lectures are not an obvious source of viral content, and providing content for free is not an obvious business model, she reported that the first year they provided their TED talks online (2007?), they increased the ticket prices by 50% (to $6,000), and they still sold out within a week. Although production of high quality videos (and conferences) is expensive, they have found that whenever you have people who are passionate about what they are doing, you can find a sponsor who wants to reach that audience.

A year ago, TED launched the TED Open Translation Project, in which 4,000 volunteers have translated 9,000 videos into 77 languages, and the translated text words / symbols are linked to the segments in the video in which they were originally spoken. More recently, they have licensed the TED brand free of charge to organizers of independent TED conferences; the TEDx series has included 1000 events in 70 countries and 35 languages attended by 50,000 people ... and the original TED organizers are learning from the experimentation carried out by the independent organizers ... demonstrating that a global platform creates a global team. And just today, they announced the TED Open TV Project, with 20 global partners who have agreed to show TED talks without interruptions or commercials. The TED strategic plan: listen - and respond - to what people want. 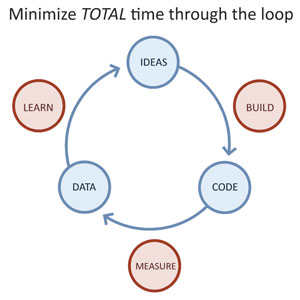 Eric Ries, Venture Advisor and evangelist of the Lean Startup, said that we need to stop wasting people's time building products that no one wants and learn how to pivot: building, measuring and learning, being willing to change directions as we learn from customers, and iterating through these three stages as quickly as we can. Arguing that if we really believe the world needs to change in a fundamental way - and many entrepreneurs are driven by some variant of this motivation - we can't afford to rely on faith-based initiatives, i.e., we cannot rely solely on our own intuitions, but rather rigorously validate our "solutions" with real customers as early - and often - as possible. Warning against achieving failure - successfully executing a plan that leads you over a cliff - he emphasized the importance of articulating a compelling vision and building a sustainable organization to support the new product or service in the face of extreme uncertainty, the "soil in which all entrepreneurs live".

I found much of Eric's talk compelling, and yet I also found much of Don Norman's recent arguments about Technology First, Needs Last: The Research-Product Gulf to be even more compelling:

Design research is great when it comes to improving existing product categories, but essentially useless when it comes to breakthroughs [e.g., flush toilets, indoor plumbing, electric lighting, automobiles, airplanes, or modern telecommunication]. ... New conceptual breakthroughs are invariably driven by the development of new technologies. The new technologies, in turn, inspire technologists to invent things. Not sometimes because they themselves dream of having their capabilities, but many times simply because they can build them. In other words, grand conceptual inventions happen because technology has finally made them possible. Do people need them? That question is answered over the next several decades as the technology moves from technical demonstration, to product, to failure, or perhaps to slow acceptance in the commercial world where slowly, after considerable time, the products and applications jointly evolve, and slowly the need develops.

I suppose one difference is in scale, with respect to impact, time frame and return on investment. If you need to actually make some money on your idea in a relatively short period of time, you may want to adopt the lean startup model, and prepare to accept customer-driven compromises along the path toward your grand vision. The next presentation seemed to offer a middle way. 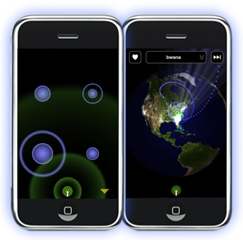 Ge Wang, Assistant Professor of Music at Stanford University's Center for Computer Research in Music and Acoustics (CCRMA) and Co-Founder, CTO and Chief Creative Officer of Smule, played us out. Offering an example of Don Norman's observation that new technologies inspire technologists to invent things, Ge shared the process of inside-out design behind the invention of the Ocarina iPhone application: he and his team decided that they wanted to build something musical with the iPhone, taking advantage of its various sensors (multi-touch screen, accelerometer, microphone, GPS), but they weren't initially sure what. The Ocarina app allows you to not only play the iPhone as an instrument, but create and share tablature for songs / musical pieces and to see, hear and play with an organic community of Ocarinists around the world, in a global visualization (and auralization?) of imperfect harmony. Among the unintended consequences was the adoption of the instrument by a nose flautist. 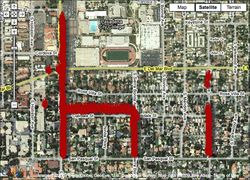 Another Smule iPhone application, the Sonic Lighter, has also yielded unanticipated consequences. Sonic Lighter creates a real-time visual and aural simulation of a lighter that responds to tilting, blowing into the microphone and being positioned near another iPhone that is running the app (which creates a flamethrower effect). It also creates a dot on the Sonic Lighter Ignition Map whenever it is lit and then blown out, which has led to an entire category of unanticipated effects now called Lighter Art (I love the double entendre ... and enjoy this much better than the darker art represented by the Oil Spill Crisis Map, for which one can also imagine an ignition component). The first known example of Lighter Art can be seen to the right, where someone created virtual graffiti - the word "hi" - by turning the Sonic Lighter on and off while walking around Pasadena in a pattern that sketched out the letters. Other Smule applications demonstrated include the Magic Piano (only for iPad), and I Am T-Pain, a mobile voice synthesizer / karaoke app, both of which include interactive mapping capabilities that enable people - or cats - to spontaneously play or sing duets with people they don't know.

Ruminating on Ben Huh's earlier presentation, and Victor Borge's quote about connecting via laughter, I found myself wondering whether music might represent the second shortest channel between two people ... or among larger groups.