Home Archives Profile Subscribe
Some highlights from CSCW 2010
Be Impeccable With Your Word: Confrontation vs. Condescension and Intimidation 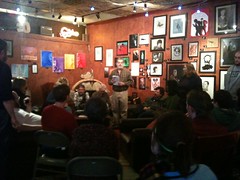 I attended a Coffee Party kickoff meeting at SoulFood Books, Music and Organic Coffee House on Saturday. Approximately 40 people subdivided into smaller groups to discuss their hopes and fears about the state of the union. Amid the largely liberal perspectives voiced by several participants, I was delighted to discover an unanticipated diversity of opinions in our group. A number of common themes emerged, but I came away most hopeful about the prospect for preserving this diversity and promoting a resurgence of the middle way in American politics.

Among the issues raised by participants were ethics, elections, economics, employment, energy and the environment. At several points, I was reminded of Paul Hawken's book, Blessed Unrest: How the Largest Movement in the World Came Into Being and Why No One Saw It Coming, and a blog post I wrote about his systems view of the interrelationships between social, economic and environmental justice. At other points, I was reminded of Doug Rushkoff's book, Life, Incorporated: How the World Became a Corporation and How To Take It Back - e.g., one person championing de-marginalization, another recommending the de-personalization of the corporation (referring to the 1844 U.S. Supreme Court decision designating a corporation as a natural person) and another suggesting a transformation from a me society to a we society.

During the course of the discussions, there were a number of references to the Tea Party movement - whose members tend to be male, rural, upscale, and overwhelmingly conservative - mostly in the context of expressing opposition to or at least distinction from that movement. I believe there are some important areas of agreement between values espoused by the Tea Party and the Coffee Party: an affinity for transparency, accountability and responsibility, and an aversion to abuses of power and other perceived injustices.

There do appear to be areas of differences between the Tea Party and the Coffee Party; among the most significant - to me - are the tactics employed. Based on what I've read and seen, the Tea Party seems to be rather ideological and confrontational whereas my first experience with the Coffee Party suggests a more idealistic and conversational approach to politics. Some members and groups within the Tea Party appear to be adopting the demonizing and spiteful rhetoric that was used so extensively during the McCain-Palin campaign of 2008. The tone and tenor of the discussions and debates within the Coffee Party meeting - in which some people articulated and advocated strong positions - was far more civil and respectful.

In a blog post about coffee, conversation, community and culture at Starbucks, I proposed the possibility of promoting civic engagement without sacrificing civil engagement, noting that others have articulated a tension between the two:

In a recent article in the Wall Street Journal, Coffeehouses: Bringing the Buzz Back, Michael Idov talks about some of the European coffeehouses I first read about in The Grand Literary Cafes of Europe, warning that Americans are "losing the coffeehouse ... to our own politeness". Idov claims that while coffeehouses were once "hotbed[s] of a proudly rootless culture", "seminaries of sedition" with traditions of "intellectual sparring", they have now become elitist bastions of "balkanization". While these coffeehouses may have promoted civic engagement, it appears that they were not well known for civil engagement.

I [still] believe it is possible to have vigorous debate - in the best traditions of the coffee house - without stooping to the vilification of one's opponent(s).

That said, one of my concerns about the Coffee Party is how effective a conversational approach can be at this juncture in American politics. We may come to understand and appreciate - if not agree with - one another better, but will this effect changes in policy and legislation? Especially if other, more ideologically unified parties and movements - and corporations - are more certain, focused and strident about their views. It's hard to have a productive conversation if no one else is listening.

In an earlier post, on conservatism, liberalism and independence, I recounted a classic Doonesbury comic strip:

In the main portion of the strip, Chase [a conservative] sums up the differences between liberals and conservatives: "[Y]ou liberals are hung up on fairness! You actually try to respect all points of view! But conservatives feel no need whatsoever to consider other views. We know we're right, so why bother? Because we have no tradition of tolerance, we're unencumbered by doubt! So we roll you guys every time!" When Mark [a liberal] replies "Actually, you make a good point...", Chase responds, "See! Only a loser would admit that!"

Listening to "The Science of Wisdom" on KUOW Weekday yesterday, I heard Stephen S. Hall, author of Wisdom: From Philosophy to Neuroscience, talk about the power of anger as a motivating emotion. While he said that anger and wisdom are not antithetical, the ability to regulate anger and other emotions effectively is one of the hallmarks of a wise person. However, he also observed that many famous wise people have been willing to run the risk of contradicting conventional wisdom and adopt adversarial stances.

The question, I suppose, is whether it is wiser - and/or more effective - to promote alternative perspectives through conversational or confrontational tactics, or to advocate adversarial positions with consideration or condescension. Personally, I tend to prefer coffee to tea.