I've been thinking and reading a lot lately about the different ways we can participate in social media, how others' responses to the social media content we produce can promote a sense of gratification, and how this - and any - gratification can also lead to distraction. 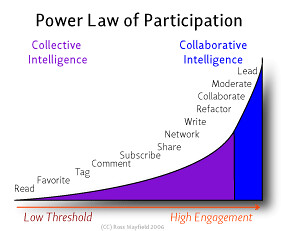 One of my earliest and most memorable encounters with conceptualizing the distribution of participation was an insightful blog post by Ross Mayfield, CEO of SocialText, in 2006 on the Power Law of Participation. Ross differentiated among several types of activities through which people can engage with social media: read, favorite, tag, comment, subscribe, share, network, write, refactor, collaborate, moderate and lead. He also composed a compelling graphic illustrating of how increasing levels of effort - or increasing ease of use through appropriate tools - can promote higher levels of engagement and transform participation from collective intelligence to collaborative intelligence. [Ross has since updated this graphic, in 2007 and 2009, but I still like the original the best.]

More recently, as I noted in a blog post on conversations and conversationalists in social media, Josh Bernoff and his colleagues at Forrester Research, offered a new visualization metaphor (a sociotechnographics ladder), an alliteratively appealing list of social media participation categories (creators, conversationalists, critics, collectors, joiners, spectators and inactives) and some specific estimates on the proportion of U.S. online adults who engage in these classes of activities. The Forrester data suggest that there may be a rising tide of participation, possibly propelled by the proliferation and pervasive use of efficient and reliable tools that ease the transition toward higher levels of participation, i.e., similar levels of effort can now yield higher levels of engagement.

However, as danah boyd has pointed out, there is value conferred through participating despite inefficiency and unreliability, - the more effort I have to expend to engage with you, the more important that engagement is to me ... and the more important it may be to you. As I recently noted, the extreme ease of use provided by some online tools and activities can lead to a commoditization and devaluation of social media participation, explaining - and perhaps undermining - some of the trends being tracked by others. 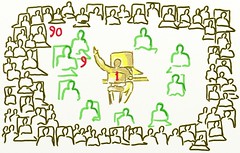 A few months ago, Dan McComb pointed me to a series of three insightful articles by Christopher Allen on "Community by the Numbers". The third article of the series, on Power Laws, explores participation inequality and the tendency for hierarchies to form as online communities to grow, wherein working groups of intermittent participants occupy a middle layer between leaders and readers. He notes that a variation of the Pareto Principle (the "80/20 rule") often holds - "90% of an online community tends to be lurkers, 9% tends to be intermittent participants, and 1% tends to be active participants."  As a community attracts more readers, more people tend to rise up to participate more actively (e.g., by writing or leading) ... and as more people participate more actively, more readers tend to be attracted. However, after communities grow beyond a certain size, the ratio of readers to leaders tends to increase.

A recent visualization of The Hierarchy of Digital Distractions compellingly - and rather humorously - conveys how various channels and modes of participation may be perceived and prioritized by users in very large communities of social media users. The pyramid metaphor, surely modeled after Maslow's Hierarchy of Needs, differentiates among the relative levels of distraction generated by the receipt of various types of messages. The low end of the pyramid (labeled automatic / reflexive) includes LinkedIn updates, work-related email and anything on MySpace. The middle level (appreciation / being wanted) includes landline phone calls, notifications of new Twitter followers and email linking to videos of frolicking kittens. The higher levels  (deep contact / deep appreciation / mystery) include mobile phone calls, retweets by the Twitterati and a new Facebook friend request from a hot stranger.

One of the interesting elements reflected in the choice of labeled data points is the differentiation of distraction levels between a new Twitter follower vs. a retweet vs. a retweet by the Twitterati, i.e., someone with many followers ... who is thereby better able to effectively co-promote and recursively attract attention to you ... er, or is it co-promotion of and attention to your tweet? Of course, the distinction is moot if you are what you tweet. 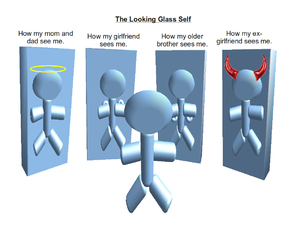 Although this model is framed in terms of distraction, I believe that levels of distraction are highly correlated with - and often caused by - the relative levels of gratification we may feel when we receive messages indicating various levels of attention ... from different types of attendees. Gratification derived via others can be considerably more powerful than self-gratification, which is why a retweet by someone else - especially a member of the Twitterati - is often more satisfying than posting self-referential tweets ... or, as Mor Naaman and his colleagues might label this, based on their CSCW 2010 paper, meforming (sharing information about oneself, e.g., "tired and upset") ... and writing this leads me to wonder how much meforming contributes to the actual construction of self ... especially within the context of Charles Cooley's theory of a looking-glass self.

Another paper presented at CSCW 2010 this week reminds us that users at the left end of the power law of participation or the lower rungs of the sociotechnographics ladder are contributing to communities, but often in less ostensible ways. In Readers are not Free-Riders: Reading as a Form of Participation on Wikipedia, Judd Antin and Coye Cheshire, highlight the valuable contributions of readers of Wikipedia, which I think applies to other forms of social media. The authors argue that readers are engaging in a form of legitimate peripheral participation by increasing the size of the audience, which, in turn, motivates others to engage in more active forms of participation. Reading may also act as a gateway activity, as most of the people who edit articles start out as readers ... and hopefully continue to read what others write.

Finally, it's probably worth noting that people who participate in social media [only] through reading are more likely to limit their engagement or indulgence in what Seth Godin calls modern procrastination.  They may also spend more time at the very bottom level of The Hierarchy of Distraction, i.e., they may get more "actual work" done than those who "progress" to higher levels of distraction.