Notes from @BigBlog meetup at Soulfood in Redmond

I enjoyed attending my first SeattlePI.com BigBlog meetup last night at Soulfood Books, Music and Organic Coffee House in Redmond. Monica Guzman (@moniguzman) organized the event, and Nick Eaton (@njeaton), who writes the SeattlePI.com Microsoft blog, was the special guest. According to a tweet posted by Monica at the outset, other bloggers / tweeters / people there include @jimgaynor @gumption @stephaniemcc @ryanbartholomew @luizmarq and @jasonp107; @howardcwu arrived later. 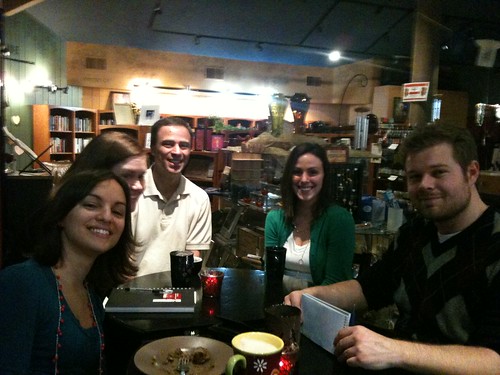 Since Nick, the SeattlePI.com Microsoft reporter, was the special guest, we could hardly help but discuss the recent Op-Ed piece by former Microsoft VP Dick Brass on Microsoft's Creative Destruction. The piece kicked off a firestorm of conversation and controversy, online and offline. Nick posted an article about Microsoft has 'dysfunctional corporate culture', ex-exec says that prompted considerable commentary from readers (although Nick says he generally has to wear a virtual flak jacket for every article he posts).

In searching for Nick's article on SeattlePI.com, I discovered an earlier article syndicated from the NYTimes, by John Markoff in November 2000, about Brass in the Middle of Microsoft's Cultural Shift , which notes Brass' former job as New York Daily reporter, his personal passion and sense of mission around eBooks and tablet computers, and a reference to an earlier [stage of] reinvention:

The tablet computer is one of the best examples of Microsoft's multibillion dollar effort to reinvent itself for the presumed post-PC era.

And, for further multidimensional irony, given that Brass chose the NYTimes in which to publish his recent Op-Ed piece ... and the fact the earlier article appeared in the SeattlePI, which then had a printed counterpart:

Among other impacts, he predicts that The New York Times will publish its last version on paper in 2018.

[Note to self: revisit this article in 8 years.]

I suspect other Microsoft-related topics were discussed at the other end of the table, but we spent most of the time at our end talking about other things. Among other interesting things shared by other participants at the meeting:

Finally, a few people strongly recommended the OmniFocus Mac application for Getting Things Done ... which reminded me of a recent dinner meeting / presentation / conversation with David Allen - after which I wrote a blog post about motivations, conversations and book-centered sociality  ... after which [I thought] I was sufficiently motivated to re-read GTD and re-apply the techniques. In a conversation a few days later, another friend, Jason Simon, had told me "there's an app for that" and strongly recommended OmniFocus ... but it often takes N > 2 recommendations for me to overcome inertia ... especially when the recommendation is for a tool designed to help overcome inertia.

In any case, I've taken the first step, and ordered a new copy of the book - I gave away my first copy of GTD several years ago to my friend, Elizabeth Churchill (who clearly gets a lot of things done) - and if this trial is more successful, I may blog more about Getting Things Done ... if I'm correctly remembering GTD terminology, "there's a folder for that".