NPR's Scott Simon (@nprscottsimon), host of Weekend Edition Saturday, is one of my favorite mainstream media players ... and with over 1.3 million Twitter followers, I know I am not alone. Simon Says, his weekly essays, are among the most insightful and provocative segments I hear on the radio.

In this week's essay, The Kindness of Cleveland, Scott expresses gratitude for the care and camaraderie he enjoyed in and around the Cleveland Clinic. He specifically highlights the care he received from Dr. Edward Benzel, the neurosurgeon who performed his cervical spine surgery ... and who gave him an inspiring paper to read afterward. The paper

I don't know whether Dr. Benzel listens to NPR's Weekend Edition Saturday, so I don't know this is a case of mutual inspiration, but it is certainly a case of the transitive property of inspiration: Benzel inspired Simon who inspired me to write about Benzel's insights into clinical wisdom ... and perhaps this post will serve to inspire others.

Actually, the chain of inspiration goes back much further than Dr. Benzel, as he invokes the wisdom of Albert Einstein, Louis Pasteur, Friedrich Nietzsche, Jim Collins, Molière, Voltaire and Leviticus, to name a few of the inspirational forbears he quotes in his article.

The article, Defining Collective Experience: When Does Wisdom Take Precedence?, published in Volume 56 of Clinical Neurosurgery, by the College of Neurological Surgeons, defines clinical wisdom as the application of knowledge, experience and the Golden Rule. In the course of arriving at this definition, Benzel reveals a number of insights into clinical practice and theory that I believe extend well beyond the walls of any clinic ... and may even transform one of the definitions of the word clinical - "analytical or coolly dispassionate". 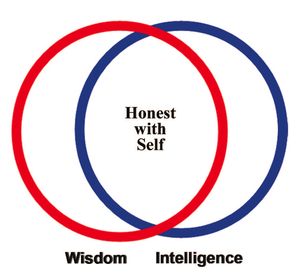 He begins by tracing the evolution of our understanding of wisdom, from logical empiricism - in which wisdom is seen as a manifestation of knowledge, or assimilation of facts - to a more recent articulation by educational theorist David Kolb, a prominent proponent of experiential learning, that wisdom involves both knowledge and experience. However, Benzel argues that knowledge + experience = intelligence, and that wisdom involves more than intelligence ... and that intelligence can exist independently of wisdom. He uses the Chinese metaphor of yin and yang to explain that a wolf can be very wise in the effective application of its limited knowledge or intelligence, while a surgeon can be very intelligent and yet not very wise. He invokes the wisdom of the father of modern medicine, the late Canadian physician Sir William Osler, and his insights into the central role of honesty with self: distinguishing between clear cases, doubtful cases and mistakes, and emphasizing the importance of learning from the doubtful cases and mistakes ... which is only possible when one embraces radical self-honesty. "No self deception. No shrinking from the truth."

Benzel presents a definition offered by David Sackett (another Canadian physician) for evidence-based medicine: "the conscientious, explicit and judicious use of the current best evidence in making decisions about the care of individual patients". He goes on to list all the reasons why the medical literature may be a "poor source" of best evidence or valid information: methodological flaws, conflicts of interest and various biases including investigator bias, patient selection bias, winner-loser bias, intellectual bias and financial bias.

One poignant illustration of biases, conflicts of interest and implicit hypocrisy was revealed through the use of an audience response system at a national medical meeting four years ago. A surgeon presented a clinical case to a group of other surgeons, 80% of whom voted to recommend a particular surgical procedure for the patient in the case. When asked a short time later how many would undergo the operation themselves, 80% said no.

Essentially, Benzel is making a case for the application of the Golden Rule, and the adoption of a core ideology of patient-centric medicine ... or perhaps more appropriately, a patient-centric approach to health, which may or may not involve medicine. Two William Osler quotes that were not included in Benzel's paper may serve to further highlight this theme:

The first duties of the physician is to educate the masses not to take medicine.

Following Scott Simon, I wish to express my gratitude to Dr. Benzel for educating the masses about patient-centric health care, and for sharing his understanding of clinical wisdom with great compassion, creativity and honesty.

Posted at 08:03 AM in Health, Heard on NPR, Inspiration, Science | Permalink | 0 comments