Jyri Engestrom first introduced me to the concept of object-centered sociality almost 5 years ago, through a blog post in which he argued that social networks consist of people who are connected by a shared object. Jyri suggests that the problem with some social networking services (such as LinkedIn [at that time]) is that they focus primarily on people and links, ignoring the objects of affinity that those linked people share, such as photos, URLs and events. The recent buzz about location-based social networking services such as Foursquare and GoWalla combined with recent reflections on my own work on using place as a catalyst for sociality has prompted me to read about, contemplate and extend the notion of object-centered sociality to include places in the pantheon of socialized objects, and to elaborate on what I might call place-centered sociality.

In his April 2005 post, Jyri noted that "place" was a promising object around which future social networking applications could be designed, but that prospect was [then] constrained by issues of cost, reliability and usability. While I'm sure he would agree that recent developments have elevated place into the realm of sharable objects about which to socialize, I want to distinguish between the notion of sociality about objects and the concept of sociality with the objects themselves. Jyri focuses primarily on the former, but I think both aspects are relevant to place-centered sociality, and help explain the appeal of some recent social networking applications that make places prominent.

Karin Knorr Cetina, who is cited by Jyri as a source of inspiration, wrote a seminal journal article on "Sociality with Objects: Social Relations in Postsocial Knowledge Societies", [Theory, Culture & Society, 1997, Vol. 14(4):1-30]. She argues for a strong thesis of "objectualization" in which "objects displace human beings as relationship partners and embedding environments" and "increasingly mediate human relationships". Much of what I've read about and experienced with the application or interpretation of object-centered sociality in the context of online social networking focuses on this latter idea of using objects - photos, videos, tweets - to mediate relationships among people (sociality about objects), but little attention is given to the former idea, wherein the objects themselves act as relationship partners (sociality with objects). We comment on, vote on, favorite, link to or otherwise reference online photos, videos, web pages, etc., but we do not [typically] form a relationship with these objects (at least not at the level in which they would be considered substitutes for human relationship partners).

Knorr Cetina invokes other sociological theories (e.g., The Homeless Mind: Modernization and Consciousness, by Berger, et al., and The Culture of Narcissism: American Life in an Age of Diminishing Expectations, by Christopher Lasch) in which "economic and technological civilization" produces a "disencumbered and disembedded self" that gives rise to a "culture of narcissism". The "overly grandiose conception of the self" results in "fear of emotional dependence" and an "exploitative approach to personal relations" that triggers a "hunger for emotional experiences with which to fill the inner void". This reference to hunger and inner void reminded me of another sociological study I recently encountered that explored how places can satisfy this hunger and fill these voids.

In "A Cup of Coffee With a Dash of Love: An Investigation of Commercial Social Support and Third-Place Attachment", [Journal of Service Research, 2007, Vol. 10(1):43-59], Mark Rosenbaum and his colleagues investigated why some customers form attachments to third places - described by sociologist Ray Oldenburg as "homes away from home" where "unrelated people relate", such as cafes, coffee shops, bookstores, bars and hair salon. Rosenbaum cites personal (vs. societal) sources of voids opening up in people's lives: bereavement, divorce, separation, illness, retirement, and empty nest (children leaving home). Third places often serve to fill the resulting gaps in local social support networks. While people in third places often play a prominent role in filling these voids - performing the role of consequential strangers and acquaintances - the physical (or metaphysical) aspects of the places themselves can be an important factor in third place attachment and other types of relationships that people form with places, e.g., place identity, existential insideness, geopiety and topophilia.

In The Prelude to her book The Dance, spiritual teacher and author Oriah Mountain Dreamer weaves together both of these aspects of place-centered sociality - people and places - in an inspiring and elegant way:

What if becoming who and what we truly are happens not through striving and trying but by recognizing and receiving the people and places and practises that offer us the warmth of encouragement we need to unfold?

Knorr Cetina also speaks of unfolding. Later in her article, she looks specifically at knowledge objects, and how they are increasingly produced by specialists and experts rather than through a broader form of participatory interpretation. She argues that experts' relationships with knowledge objects can be best characterized by a the notion of lack and a corresponding structure of wanting [emphasis hers] because these objects "seem to have the capacity to unfold indefinitely": new results that add to objects of knowledge have the side effect of opening up new questions. This perpetual unfolding gives rise to "a libidinal dimension or dimension of knowledge activities" - an "arousal" and "deep emotional investment" - by the person studying the knowledge object. As an example, she describes the way that biologist Barbara McClintock, who won the Nobel Prize for her discovery of genetic transposition, would totally immerse herself in her study of plant chromosomes, identifying with the chromosomes and imagining how they might see the world - evoking an image (for me) of object-centered empathy more than sociality.

Although I'm not sure whether many people would enter this kind of flow state in thinking about and relating to places, I'm reminded of Carlos Casteneda's book, The Teachings of Don Juan, in which Yaqui sorcerer don Juan instructs Castenada to find his "spot":

While you remain rooted to your "good spot" nothing can cause you bodily harm, because you have the assurance that at that particular spot you are at your very best. You have the power to shove off anything that might be harmful to you. If, however, I had told you where it was, you would never have had the confidence needed to claim it as true knowledge. Thus, knowledge is indeed power.

Po Bronson, in his book, What Should I Do With My Life?, also emphasizes the value of finding one's spot (though with a somewhat more metaphoric notion of "spot"):

I'd like to suggest an alternate "success" story - one where, with each next, the protagonist is closer to finding that spot where he's no longer held back by his heart, and he explodes with talent, and his character blossoms, and the gift he has to offer the world is apparent. 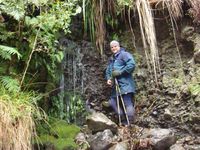 My friend Robb Kloss offers many examples of place-centered sociality on his Musings from Aotearoa blog, regularly recounting inspiring instances of flow states he has experienced in various places throughout the Ruahine mountain range in northern New Zealand. Although some of Robb's experiences involve the sharing of his affection for the Ruahines with other people - both the people who accompany him on his expeditions or that he meets in the mountains and those who read and comment on his blog posts afterward - there are numerous examples throughout his writing - and photography - of his immersion in the mountains themselves.

While the experiences of Kloss and Casteneda may be extreme in some ways, I believe most of us have encountered some form of the power of place(s), and participated in a form of place-centered sociality in which our relationship with the places (as objects) themselves, rather than - or in addition to - the people in places, is the nexus of connection. While sociality about other kinds of objects have created or enhanced many relationships in social networking services, I'm excited about even greater prospects for some new technologies and applications to enhance the power of - and connection with - places, as well as the possibilities for connecting to other people through places.