I've encountered several examples of customer dissatisfaction recently that prompted me to consider the various channels customers use to signal their dissatisfaction, and how well or poorly those channels serve to resolve the issue(s) in a satisfactory way. In reflecting on the word satisfy - which derives from the Latin satisfacere: satis enough + facere to do, make - I was reminded of Abraham Maslow's hierarchy of needs, and so I thought I'd frame this review of the examples in the context of a hierarchy of customer satisfaction needs. 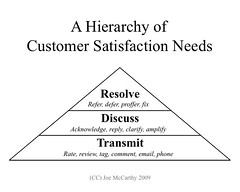 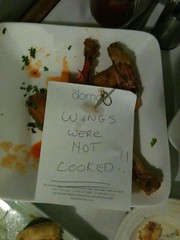 My reflection on channels for signaling dissatisfaction was initially triggered by passing a room service tray outside of a hotel room I was staying at earlier this week. A handwritten note stating "Wings were not cooked!!" was pinned - or toothpicked - to a chicken wing on a plate. I started wondering why the person chose to signal his / her dissatisfaction by writing and posting a note rather than simply calling room service to discuss the problem and seeking a resolution, e.g., having a fresh order of [better] cooked wings sent to the room. I briefly mused that the dissatisfied customer intended to broadcast his / her dissatisfaction to other hotel guests who might walk by and see the note while it was in the hallway ... though I suspect I was the only member of the audience to witness the performance. Given that the order was probably placed via telephone, I imagine that the customer was not interested in discussing the problem, and perhaps simply writing the note yielded the desired level of satisfaction [I recently read a study demonstrating the emotional and physical health benefits of expressive writing]. That said, if I'd had a piece of paper handy, I might have been tempted to handwrite my own note, "Post it on Yelp", and slide it under the door. 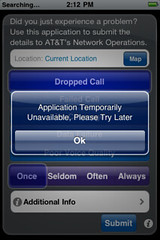 The second recent example of channeling dissatisfaction arose when I tried using the AT&T Wireless iPhone app, Mark the Spot, which is designed to enable customers to report wireless network connectivity problems where and when they occur. Unfortunately, the first time I launched the application was when the network dropped a call while I was stuck in traffic near SeaTac airport, but the application didn't work: "Application Temporarily Unavailable. Please Try Later". I suspect this was due to the fact that there was no network service at that point in time (as evidenced by the "Searching..." icon in the upper left corner of the screenshot to the right), in which case it would have been more useful to cache the location for delayed reporting when the phone was reconnected to the network again. Unfortunately, the unmet expectation of actually being able to do something constructive about a frequently recurring problem only added to my level of dissatisfaction. I have since been able to use the app successfully during subsequent dropped calls, but aside from transmitting the information, it gives me no way to discuss the issue, or learn about progress toward resolving it. It would be great to have a web site that would track the reports, ideally via a map, and to enable users to discuss issues with AT&T - and other users - and to receive feedback about which reported problems are being addressed. In addition to increasing satisfaction for customers, having a more engaging way to deal with problems on the web may decrease the number of complaints their call center operators have to handle (thereby potentially increasing their satisfaction as well).

[Update: shortly before starting this blog post, I'd posted a message on the iPhone app thread in the AT&T Wireless Forum about the problem I encountered, and shortly after finishing this post, zentec posted a resolution (and a pun) there ... which, of course, gives me considerable satisfaction ... and which I include below:

Use "Map" to grab the coordinates of the current location by hitting the map button, then returning.  Hit submit when you have a signal and the correct spot of the problem is sent.

However, you must not close the app until you submit as the location will be lost.

The third example I encountered this week was some uncharacteristically critical commentary on MyStarbucksIdea site on the Starbucks Melody blog, which is typically very supportive - and promotional - of all things Starbucks. Melody has been a "super-user" of the site - designed to enable users to share, vote on, discuss and see progress on ideas for improving the Starbucks Experience - since its inception in April 2008, and her commentary offers an insightful history of its evolution [I'm including an old screenshot of one of my favorite ideas on the site, as it relates to my earlier blog post about conversation and community at Starbucks]. MyStarbucksIdea offers elements of all levels of the hierarchy of customer satisfaction needs, and she includes many positive aspects in her review, e.g., the wealth of information, the breadth and depth of discussions and the overall entertainment value. However, she also highlights aspects that have limited the satisfaction she - and, presumably, others - derive from the site, e.g., the duplication of ideas, the duplication of "we're working on it" responses, and the plethora of negative comments and down votes that often appear on ideas that are perceived as negative in topic or tone (sounding almost like mob-like behavior by defenders of Starbucks) ... a tendency that leads Melody to recommend that the capability to vote down an idea be removed ... but I'm not sure I would vote this idea up, a topic to which I'll return.

Any site that offers a channel for feedback - and discussing feedback offered by other users - is vulnerable to excessive negativity. I reviewed a few particularly disturbing examples of this tendency in my post on the dark side of digital backchannels in shared physical spaces, but this tendency is far more general, and I see it regularly on a service that I recently started using to get satisfaction in reporting problems with FourSquare: GetSatisfaction.com. At one point, I subscribed to all of the threads that I had either started or added to - and the site offers guidance to help find existing threads relating to a problem I'm reporting (a way of addressing one of the duplication problems on MyStarbucksIdea that Melody reported). Unfortunately, though, many of these threads soon get overrun with people vehemently venting about their frustrations with some aspect of FourSquare. As with MyStarbucksIdea, there are a number of "defenders" who jump on to balance out the discussion, and they generally seem to do so without getting [excessively] negative themselves. However, some of the posts are so mean-spirited - which I think really says more about the user than the service - that I've unsubscribed to many. [FWIW, I'm a big fan of FourSquare; I share feedback with them mostly to make the service better, which will ultimately give me more satisfaction, but the dissatisfaction I get from reading angry rants outweighs the potential satisfaction I hope to get in eventually reading about the resolution of many issues.]

At one point, Yelp was my favorite source for sharing feedback, mostly on restaurants (though the service has expanded to a variety of other types of businesses). Over time, though I have found myself lurking more than participating, as many of the businesses now have so many reviews that I increasingly experience a sort of bystander effect, posting reviews only when my experience seems to deviate substantially from the majority of experiences shared by others (a variation on the "brag and moan" model). Yelp encourages people to post reviews through incentives such as offering the prospect of "elite" status for contributors who share a large quantity of [high quality] reviews, and unlike MyStarbucksIdea, they do not allow anyone to share any negative feedback with other reviewers: people cannot comment on each others' reviews (except in their own reviews), and they can only rate another review as useful, cool or funny.

There are many reviews that I encounter on Yelp that I'd like to vote down - or at least say "this was not useful" (as Amazon allows users to do) - and I think the ability to offer a broader range of constructive feedback to reviewers may yield even higher quality (and, hopefully, lower quantity). That said, I'm not sure how best to support a broader range of feedback - and feedback on feedback - and I think the relative costs and benefits to various voting and/or rating schemes (e.g., the numeric ratings for movies on Netflix) is an interesting open question, and probably depends on both the raters and ratees - the community providing evaluations and the products or services being evaluated.

Ironically - for a service dedicated to open source reviewing - Yelp does not use GetSatisfaction, nor does it have a special purpose feedback site like MyStarbucksIdea. While it offers tools to help users get more satisfaction about other businesses - covering the entire hierarchy of customer satisfaction needs - its openness to feedback on its own service is limited to the lowest level of the pyramid.