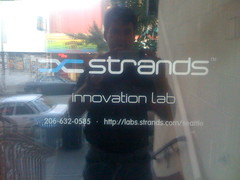 On October 1, Strands Labs Seattle effectively closed. With the tightening economy, our parent company, Strands, has decided to focus its resources on its three primary business units - Strands Business Solutions, Strands Personal Finance (moneyStrands) and Strands Social Discovery (strands.com). The CoCollage application that we developed in the Seattle lab continues to be supported by Tyler Phillipi, our Business Development Manager, who will continue to develop business prospects for the system: generating revenue by selling advertising on our network of 23 community displays around Seattle. However, further sociotechnical research, design and development activities have been suspended. Our former Tech Lead has left the firm to join another startup company down in the SF Bay area, our former Lead Designer has been reassigned to support one of Strands' three core business units, and our former Principal Instigator (me) is now, in effect, an instigator without portfolio. I've had some time to work through most of the first four stages of grief, and as part of the fifth and final stage - acceptance - I wanted to engage in some personal reflection on this latest chapter of my professional life.

Shortly after joining Strands (then called MyStrands), I defined the mission upon which we were preparing to embark:

To design, develop and deploy technologies that weave together the various strands of our activities, interests and passions to bridge the gaps between the digital and physical worlds and help people relate to the other people, places and things around them in ways that offer value to all participants.

As we converged on an application designed to manifest this mission, we iteratively pared it down to a more manageable mouthful:

The application we created, CoCollage, was designed to promote conversation and connection in coffeehouses and other community-oriented places by showing a dynamic collage of photos and quotes uploaded by customers and staff to a special website on a large display in that place ... or, as I sometimes like to put it, CoCollage is a place-based social networking system designed to bridge the gaps between people by bridging the gaps between their online and offline worlds.

The initial design and deployment of CoCollage at Trabant Coffee in Seattle's University District - two blocks from our now-former office - in August 2008 was reasonably successful, attracting hundreds of users who uploaded thousands of photos and quotes. Our interactions with the owners, staff and customers - through a combination of semi-structured interviews, online and offline surveys, and other sources of online and offline feedback - provided a number of insights, many of which are captured in a paper on "Supporting Community in Third Places with Situated Social Software", which we presented at the 4th International Conference on Communities and Technologies (C&T 2009), the slides from which are included below.

These insights were also incorporated into a second version of the system, released in November 2008, just in time for our expansion into four additional coffeehouses in Seattle: Tougo, Neptune, Kaladi and All City. We continued our expansion throughout the first quarter of 2009, partnering with a total of 20 venues by April, incrementally adding new features to support conversation and connection, as well as the integrated advertising - on the large displays and on the web sites associated with each venue - that we hoped would eventually support CoCollage as a profitable product for Strands. While most of our new venue partners are coffeehouses or cafes, we also started working with other types of third places, including a bookstore, a bar, two restaurants, a barbershop and a religious community center.

During the second quarter, however, we encountered some unexpected turbulence. Our initial goal was for the advertising to come only from local businesses: ideally, independent "mom & pop" stores within walking distance of our venue partners. Just as each CoCollage instance was designed to provide a window into the commonalities and diversities among individual members of its community - helping customers and staff better appreciate the interestingness of the people around them - the advertising component was intended to provide a window into the relevance of local businesses - helping people better appreciate the value small businesses right around the corner had to offer. Unfortunately, selling advertising to small businesses - many of which had little or no experience with traditional advertising, much less a new-fangled approach to advertising on a community display and web site - turned out to be far more challenging and time-consuming than we'd anticipated.

Others have commented more extensively on the challenges of hyperlocal advertising, and I'm reminded of a remark made by Scott Svenson at NWEN's Entrepreneur University 2005 about one of the greatest strengths he and his co-founder at Seattle Coffee Company (acquired by Starbucks in 2003) benefited from was what they didn't know (e.g., they didn't realize that opening 8 stores in 12 days was something that not even Starbucks would have attempted [at that time] ... and even Starbucks is still learning about a sustainable number of stores). In any case, we relaxed our advertising constraints, shifting from community-based to community-oriented, hoping to tap into a broader base of potential advertisers while still maintaining relevance to the communities with whom we we were working.

We finally succeeded in signing a significant advertising contract in the third quarter, but by then there were other, external pressures mounting: the continuing recession was creating increasing constraints on Strands. The company had created two innovation labs in late 2007 / early 2008 - one in New York City, the other in Seattle - and had also funded a smaller innovation project in the fall of 2008. By the summer of 2009, the company decided to focus its resources on the three larger, more established, business units, which were producing the most revenue, or expected to produce the most revenue in the near term. Prospects for spinning off the other projects into new, separate companies were discussed, but in the case of Strands Labs Seattle, we were unable to converge on terms acceptable to all parties.

Although I've been reading more about the perils of positive thinking, I remain an irrepressible optimist. While I'm sad about the dissolution of Strands Labs Seattle, I'm grateful for the opportunity I was given to create and lead - or, as I like to put it, "instigate" - a research lab: defining a vision, hiring and working with some amazing people, finding and furbishing a fabulous office (and deck), and producing a prototype that progressed so far down the productization pathway. I'm also grateful for the opportunity to work closely with so many owners, staff and customers of independent coffeehouses and other third places around Seattle. It has been an honor, a privilege and a delight to engage in such a variety of conversations and connections that have been cultivated through our collaborations on CoCollage.