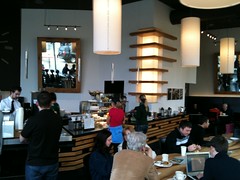 I've met with good friends at Kirkland Zoka the past two mornings, enjoying great coffee, stimulating conversations of considerable breadth and depth, and a continuing education about a range of topics, including social media, Foucault and social dialogue, the challenges of living without a goal (or, at least, living without attachments) ... and the finer points of fine coffee. 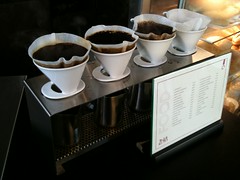 Upon my arrival at Zoka, I was happy to reconnect with Matt, one of the baristas who had been working at Trabant when we initiated our collaboration on the initial deployment of CoCollage (and who has one of the coolest pair of forearm tattoos I've ever encountered). After telling Matt that I was interested in trying something with full body - subtlety is nearly always lost on me, and I need big, bold flavors in anything I drink to really have [positive] impact - he suggested the Kenya Kirimara, and I followed his recommendation, enjoying a great cup via their ceramic Melitta "pour-over" system (pictured left). While I was waiting for the coffee to be prepared, I became intrigued with the pair of 37 inch LCD displays showing dynamic patterns and sequences of Zoka-related photos on the southeastern wall of the coffeehouse. The upper display shows a scrolling collage of photos while the lower display shows a single photo at a time. As far as I can tell, all the photos are of, about or by Zoka, its owners and staff, the coffee they serve there and the places / plantations from which the coffee is sourced.

Although I was mostly engaged in the conversation(s) with Jason while I was there, my long association with CoCollage led me to occasionally monitor the level of attention and engagement the displays were attracting. It seemed to me that they were less engaging than the CoCollage displays - which also show a collage of photos (but the photos are contributed by customers, not just owners / staff, and their selection is influenced by who is in the coffeehouse at any given time) - but of course I'm [still] biased. I suspect part of the difference - in addition to who is contributing photos and whether / when they are shown - is due to the size and placement of the displays. The 37" LCDs (vs. 50" plasma displays used for CoCollage), coupled with the position in a corner of the coffeehouse some distance away from where most people sit, makes them somewhat less noticeable than most of the CoCollage installations. Interestingly, I had talked with the manager of the Greenlake Zoka (or "Original Zoka") and University Zoka about a CoCollage installation, but there was no interest in having any kind of display in those two coffeehouses. A recent post on the Zoka blog - Zoka Getting "With It" - which mentions the Zoka Facebook page and Twitter account (@zokacoffee) - suggests that they may be becoming more engaged in / through social media ... at least online. 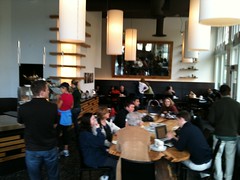 This morning, I returned to Kirkland Zoka to meet another friend, Mike Buckley, founder of Inventcor, which produces, among other things, a water tracker bottle (for monitoring daily personal hydration), to talk about personal, professional and philosophical issues not as closely related to coffeehouses, per se. The coffee house was much more crowded this morning (a Saturday) than yesterday morning, and I noticed that the community table had a much larger pool of people gathered around it today. The sun was shining for much of our time there, and the large, open windows, light colors and strategically positioned mirrors helped accentuate the delightful, but increasingly rare, absence of clouds today (though, alas, it did cloud over after a while).

After a post-coffee walk along the lakeside with Mike, I realized I was still undercaffeinated, and so after he left, I went back into Zoka for a second cup. Having recently started reading Everything But the Coffee: Learning About America from Starbucks, by Bryant Simon (no relation to Jason) - in which the author complains, among other things, about how customers at Starbucks stores tend to either keep to themselves, talk only with people they come in with, or talk with people they go there to meet, I was eager to spend some time there observing conversations (rather than participating in them). Although there seemed to be a few examples of spontaneous / serendipitous conversations among people waiting in line - perhaps due to the relatively inefficient layout of the counter (order on the left, pay on the right, go back to the left to pick up your drink, with the food display case in the middle) - I can't say I saw any more such conversations taking place at Zoka than I've seen (or Bryant Simon reports seeing) at Starbucks ... and despite Simon's critiques, I've had some pretty amazing coffee and conversation experiences at Starbucks.

Keith Hampton and Neeti Gupta, in their fascinating study of Community and social interaction in the wireless city: wi-fi use in public and semi-public spaces, distinguish between true mobiles - who do not want to interact with others in the coffee shop (other than people they arrive with or meet there), and [so] often use laptops as "portable interaction shields" and/or mobile phones as "legitimate momentary diversions" -  and placemakers -  coffee shop customers who desire and seek out serendipitous social interactions. Hampton and Gupta studied both independent coffee houses and Starbucks coffee houses in two cities - Seattle and Boston - and did not report any significant differences between the types or numbers of conversations at either kind of place [Correction: they did note more true mobiles at Starbucks and more placemakers at independent coffee houses]. I plan to post another entry about the Bryant Simon book - and the Hampton & Gupta paper - once I'm done with the book ... and, perhaps, conducted a few more first-hand observations of Starbucks and third wave coffeehouses like Zoka.

Meanwhile, returning to first-hand experiences of coffee and conversations, in addition to observing conversations at Zoka, I was also eager to expand my coffee horizons. I asked Conner, another barista there (who also looks familiar ... perhaps he also worked at Trabant), for a recommendation of another full-bodied coffee to try. He told me they had Ethiopian Sidamo, and asked me if I wanted some of the old batch or some of the more recently roasted batch. I asked him which was bigger and bolder, and he said the older one probably had an edge in that regard, so that's what I ordered. 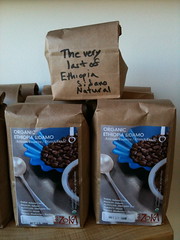 As it turned out, although my plan was to only observe conversations, I become a participant in yet another engaging discussion. Conner went on break shortly after serving up my coffee, and sat down next to me for a bite to eat ... and didn't get as much of a break as he'd probably anticipated. I asked him what the difference was between the old and new batches of Ethiopian Sidamo. He explained that the older batch was "natural", i.e., after picking the coffee cherries, the cherries are laid out to dry before extracting the beans from their casing. This allows more of the fruit of the cherries to be imparted (infused?) into the beans, and increases the acidity. The newer batch was "washed", i.e., the beans are removed from the cherries - and washed - soon after picking, before they are allowed to dry. [I've since found a blog post with information about "washed" and "natural" Ethiopia Sidamo.] Conner asked me if I could taste any blueberry in the cup I was drinking, and I had to admit that I could ... continuing an educational process that started with a Clover tasting at Trabant over a year ago. There was only a handful of beans left from that batch, and he kindly put them in a bag for me to take home with me (see photo to the right). I now wish I'd asked for a cup of the new batch, to try them side-by-side, but then I probably would have been overcaffeinated.

Perhaps I'll go back soon to pick up a bag of the newer batch ... in any case, I'll definitely be going back there, as Kirkland Zoka is my new favorite independent (or, perhaps more accurately, micro-chain) coffee house on the Eastside.