Contradictory ridges, self and Self

Continuing with the themes of poetry, inspiration and great friends, another great friend, Dan Oestreich, bought me a book of William Stafford's poetry, "The Way It Is", a few years ago - one of many ways he helped me navigate a dark time filled with shadows.The other night, I picked up the book - which is always at my bedside table - and randomly selected a page, which had exactly the right poem I needed at that moment, "Representing Far Places":

In the canoe wilderness branches wait for winter;
every leaf concentrates; a drop from the paddle falls.
Up through water at the dip of a falling leaf
to the sky's drop of light or the smell of another star
fish in the lake leap arcs of realization,
hard fins prying out from the dark below.

Often in society when the talk turns witty
you think of that place, and can't polarize at all:
it would be a kind of treason. The land fans in your head
canyon by canyon; steep roads diverge.
Representing far places you stand in the room,
all that you know merely a weight in the weather.

It is all right to be simply the way you have to be,
among contradictory ridges in some crescendo of knowing.

I re-read the last verse several dozen times that night, as I was struggling with a decision in which my thoughts were leading me along one contradictory ridge, and my feelings were leading me along another. As luck - or synchronicity - would have it, the previous day, I'd shared an insight with someone I'd just met about how, as I grow older, I trust my heart more than my head when it comes to decisions of great import ... and, as I grow older, I increasingly recognize that any insights or experiences I share with others - with the initial intention that they may be of benefit to them - are always things that I really need to read / hear again myself.

Anyhow, I sent Dan a quick note thanking him for the gift that keeps on giving, and he magnified the gift by turning it into a motivational poster entitled "Among Contradictory Ridges", accompanied by one of his fabulous photos: 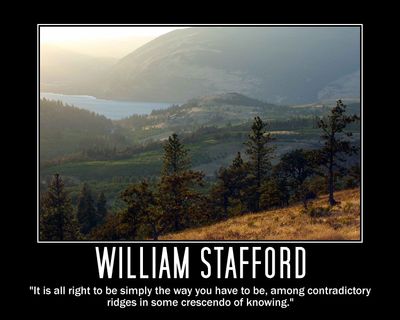 In addition to being a great friend, Dan is also a great leadership coach (and a great photographer), and he followed up his "Among Contradictory Ridges" motivational poster with another one reflecting one of the central themes in his work (with his self, other selves and Self) - an Unfolding Leadership Poster - in which he observes "The problem is self. The answer is Self": 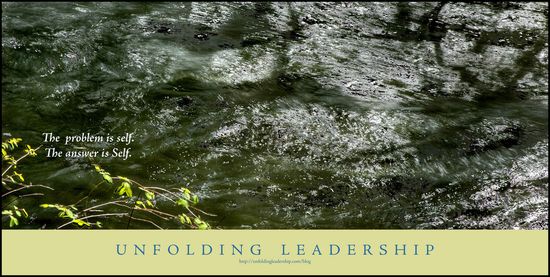 Around the same time, I serendipitously encountered a related source of inspiration - via a retweet by @merubin (who I discovered via @KathySierra) - on the blog of Pastor Brandon A. Cox, who recently posted the "10 Reasons Why Humility is Vital to Great Leadership", in which he champions the humble practice of self-oblivion. I'm including the entire post below for context:

Quickly think of five common traits of high-impact leaders… good time management, assertiveness, drive, energy, charisma, etc. Humility rarely lands in the list when it comes to our modern, top-down management systems. But Jesus (the greatest leader ever) and Moses (perhaps the second) had this one thought in mind – great leaders don’t have power over people, but power under people by way of humility.

Humility may be a forgotten virtue in conversations about leadership today, but I believe it’s absolutely essential to having long-term, broad-range impact. Here are some reasons why…

Humility isn’t feeling bad, down, or low about yourself. Rather, humility is having a realistic picture of who you are and becoming oblivious to self. This self-oblivion characterizes the greatest leaders of all time, and if you want to rise to greatness, you need to stoop.

Thinking about self-oblivion as a feature, rather than a bug, is a provocative new dimension to consider as I travel among contradictory ridges in some crescendo of knowing.