Home Archives Profile Subscribe
At least we have our health ... or do we?
Direction, by Len Silverston

Jackson Browne: a cool, crisp concert at the Chateau 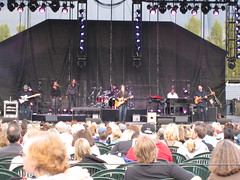 We saw Jackson Browne in concert at Chateau Ste. Michelle last night. The Rock and Roll Hall of Famer and his fellow musicians gave a crisp, clean performance of many familiar songs on an unseasonably cool evening at the winery. Of all the concerts I've seen at the winery - nearly all of which are by musicians who first gained fame in the 60s and 70s - Jackson Browne, now 60, looked and sounded the strongest. The band played and sang well together, the sound was perfectly mixed (nothing was too loud or too soft), and - unlike the recent Dave Mason concert at CSM -  there was plenty of banter with the audience.

The aspect that most stood out for Amy and me - and other friends who were with us - was the outstanding vocals provided by Chavonne Morris and Alethea Mills. They were seated on stools in the background throughout most of the first set, mostly providing background vocals for the songs; at one point, Amy - always attuned to vocals and vocalists - turned to me and asked "when is he going to let them cut loose?" Well, we didn't have to wait long. In the second set, they were on their feet, and their solos during the third song, "About my imagination", really opened things up. Their solos in the next song, "Lives in the Balance", kept the momentum building throughout the set.

While the women, who joined the group fairly recently, were the standouts, the rest of the band, who have been playing with Browne since 1993 - Kevin McCormick (bass), Mark Goldenberg (guitars), Mauricio Lewak (drums) and Jeff Young (keyboards, backing vocals) - were all [also] outstanding. The bass player is also the producer, and I wondered how much his involvement on stage influenced the incredibly balanced sound mix we were treated to during the show. Another highlight was the guitarist's use of what my friend Bruce said was a 11-string fretless guitar that provided an eastern sound during "Lives in the Balance" (by the time the binoculars got back down to me, the song had ended).

Other highlights included the last song of the first set, a rocking rendition of the classic song, "Take it Easy", which [I didn't previously know] Jackson Browne co-wrote with Glenn Frey of the Eagles, the band that popularized the song, making it one of The Rock and Roll Hall of Fame's 500 Songs that Shaped Rock and Roll (Browne's own performance of another song, Late for the Sky, is also on that list). And, of course, the most classic encore song of all time, Stay, was great to see live as the second and final encore. 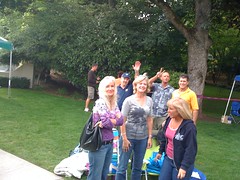 We are very fortunate to have good friends - Bruce, Jay and others (pictured on the right) - who were willing to go to the winery early and reserve a spot in line. I've been asked not to reveal how early they got there, but it was sufficiently early that we were the first in line - at the main gate - to vie for the lawn seats. Unfortunately, they opened up the south gate a minute or so before the main gate, and so we didn't get the front "row" on the lawn, but we were right in the center in the second and third rows, which gave us a fabulous vantage point from which to watch the concert.

I've always enjoyed Jackson Browne's music, but have never owned any of his albums, and so while I recognized most of his songs, I had to use my iPhone browser to look up the names of songs based on some of the key lyrics. I also used the iPhone Notes application to keep track of the songs, which worked better than the small pad and pen I used at the Dave Mason concert (where darkness and rain compromised the legibility of my notes). The following is, I believe, a fairly accurate representation of the set lists played at the concert: