I wrote about buying a 2008 Honda Civic Hybrid - my first new car in 21 years - a little over 4 months ago. My appreciation for the car has been growing over time, and I wanted to share some of the insights and experiences that have unfolded during this extended "break-in" period.

First of all, as I'd noted in my earlier post, fuel efficiency was a primary motivation in purchasing this car. Marco, the salesperson at Honda Auto Center in Bellevue who sold me the car, had advised me to ignore the real-time fuel efficiency feedback display and to resist "babying" the car during the first thousand miles. I varied the speed regularly, ran the car through most of the range of RPMs (without approaching too close to the "red line" mark), and avoided harsh stops and starts as much as possible. 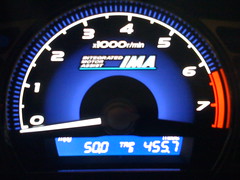 Marco had warned me that I might only get 35 miles per gallon during that period, but I got over 40 mpg on that first tank of gas, and was achieving nearly 45 mpg by the end of the first thousand miles. Shortly thereafter, I heard a story on NPR in which a fuel efficiency expert was claiming that the federally mandated 55 mile per hour speed limit that was imposed during the oil crisis of the 1970s really was the ideal speed limit for achieving high fuel economy in most automobiles. So, I experimented with driving at a maximum of 55 miles per hour for one tank of gas, and achieved a high of 50.0 mpg (see photo at the right, taken after driving 455.7 miles at speeds of 55 mph or lower). [Another NPR story reported that, for a short period of time, driving 55 mph in a Honda Civic along a specially engineered stretch of roadway in California with precisely spaced rumble strips achieved a perfect pitch rendition of the William Tell Overture (more details, including videos, can be found on the Honda web site ... and, of course, on YouTube ... see below).]

While I have found myself staying within posted speed limits more and more regularly as maximizing fuel economy gradually becomes a higher priority than minimizing time to destination(s), there are times when conserving time is still more important than conserving fuel. In any case, at this point, I'm delighted to report that I've averaged 46.8 mpg over the first 4,321 miles, well above the EPA estimates of 41 mpg city / 45 mpg highway. I should note that much of my driving is highway (vs. city) and that I rarely have any passengers or other sources of extra weight in the car ... and, of course, it [almost] goes without saying that YMMV.

In addition to the fuel economy, I've discovered other interesting, and mostly positive, features of the 2008 Honda Civic Hybrid. One is what I might call contextual maintenance (as contrasted with scheduled maintenance): instead of being instructed to change the oil at regular intervals based on time or miles driven, this car monitors the quality of the oil and will let me know when I need an oil change. At this point, the instrument panel tells me I'm only 50% of the way to my next (and in this case, first) oil change. I also found out that the Civic Hybrid uses 0W-20 oil, a specification I'd never heard of before ... though there is some debate about whether and why 0W-20 oil is required.

This is the first car I've had with leather seats (as I noted before, it's also my first hybrid ... and I suddenly realize it's the first sedan I've ever owned). The seats are generally comfortable, providing good support (at least on short to medium length trips), e.g., the head rest fits neatly into my neck area, unlike airline seats in which the headrests tend to push my head forward. However, I recently drove to Portland, and around 3 hours into what turned into a 4.5 hour drive, I found myself feeling a bit stuff in places. I've driven the Camry back and forth to Corvallis, OR (twice) - a 4.5-hour drive - and never had any noticeable stiffness.

My daughter has driven the car a few times, and pointed out that the post between the front and back doors is rather wide (compared to our 1994 Camry, which she now drives). She does not like the digital speedometer, though I actually prefer it to analog speedometers. She also pointed out that the dashboard is reflected in the window on sunny days (I have the beige interior).

And speaking of protective measures, I also picked up floor mats for the car. After considering various options, including the relatively inexpensive generic mats they sell at auto parts stores, I read a thread on all season floor mats in the 8th Generation Honda Civic Forum, and decided to go with the Honda all season floor mats. They have worked great ... and I'm especially glad to have them now that the first snow has fallen this winter.

Another thread on the 2009 Honda Civic in the forum reported that the new model was scheduled to go on sale August 19, which may help explain why there were so few 2008 models left - and why they were being sold at such a high price - when I made my purchase earlier that month. Oh, and speaking of prices, I forgot to note in my earlier post that the Kelley Blue Book suggested retail value of a used 2007 Honda Civic Hybrid (with 12,000 miles) was $23,616 (it's now $22,300) - more than $300 more than the $23,270 MSRP for a new 2008 Honda Civic Hybrid at that time. The current KBB suggested retail value of a used 2008 Honda Civic Hybrid with 4000 miles is $24,100 (a new 2009 Honda Civic Hybrid with leather seats has an MSRP of $25,420). GIven that I paid $26,000 for the car four months ago, the value has not held up quite as well as I'd expected at the time, but given that our investments in the stock market have plunged far more than 7% since August, it would appear that this turned out to be an unexpectedly wise and timely reallocation of portions of our investment portfolio.

In an article appearing in The Seattle Times (originally written for The New York Times) at the beginning of August, "End of the road for the American Dream Car?", Mireya Navarro talks about how the high fuel prices (at that time) were changing perceptions of what constitutes an ideal car for a growing number of drivers. The precipitous plunge in gasoline prices over the past few months - falling 60%, from a high of $4.12 per gallon (average price across the U.S.) the week I bought the car to $1.65 per gallon now - may have resulted in a re-reassessment of that ideal for some (see the chart from GasBuddy below).

I have to say that the gasoline price plunge has helped me overcome some of the hybrid smugness I had been feeling at first, but given yet another NPR story I heard yesterday on 'peak oil' (reminding me of my introduction to 'peak oil' via The End of Suburbia four years ago), I still feel good about becoming more conservative in this one particular dimension of life.