Revenge of the Community Organizers 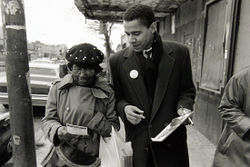 I guess a small-town mayor is sort of like a "community organizer," except that you have actual responsibilities.

At the time, I wondered how community organizers - on the left and on the right - and the people they work with (the community "organizees"?) felt about this perspective. There were reports the next day of how this snide remark galvanized Obama supporters, including some religious groups - my favorite response was "Jesus was a community organizer; Pontius Pilate was a governor" (heard on the Diane Rehm show). There were some compelling responses defending community organizing and noting how important this work is, in general ... and in elections:

The change voters are talking about this year builds on the shared problems community organizers have been helping people identify for decades. The change voters want builds on the solutions community organizers have been nurturing and putting into place, building the leadership of everyday Americans all across our country to demand that America work for everyone. 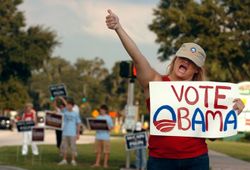 It wasn't until I heard the most recent episode of NPR's On The Media - the segment entitled Net Routes, based, in part on a Wired article on Obama's Secret Weapons: Internet, Databases and Psychology - that this all came together for me, helping me understand the full irony of Palin's attack on Obama: the community organizing experience she so derisively mocked in her speech was actually a key to the success of his campaign!

Ganz' emphasis on personal narrative as a means of empowering and engaging people was particularly poignant, given my recent reading of The Stories We Live By: Personal Myths and the Making of the Self, by Dan McAdams, in which he observes:

In order to live well, with unity and purpose, we compose a heroic narrative of the self that illustrates essential truths about ourselves.

I'm including an embedded link to the 6-minute audio for this segment, and a few quotes highlighting some of the most interesting and inspiring observations made by Marshall Ganz below.

The [community] organizing approach is that you hire full-time people, train them to be organizers, and their job is to recruit leaders from local communities, bring them together and equip them and train them to work together to reach out to their neighbors, the other people that live in the community, the voters themselves.

So there was a level of empowerment of volunteer leadership at the local level that is a theme that’s run all through this campaign. And that’s why you see the responsibility, the enthusiasm, the creativity. And that’s why when the campaign is over, as it is now, this isn't going to go away.

What we helped them understand is that the first thing they need to learn is how to articulate their own story, in other words, what is it that moved them to become involved and engaged, because it’s from their own story that they're going to be able to most effectively engage others. So when people leave, they leave equipped to do that. That’s sort of the foundational piece.

And in the initial series in California, we launched 200 teams in two weekends that, with the support of four staff people, built that operation out there to the point where it could make 100,000 phone calls a day. This is like an investment in civic assets, in local communities that no political campaign has done for years.

The right benefited from being rooted in social movements, which do this because that’s what social movements do. They translate values into action; they bring people in to work together. But on the progressive side, everybody had become marketeers. Everybody’d been marketing their cause or marketing their candidates as if it was another bar of soap, transforming people from citizens into customers.

What we did was bring the citizenship back in and put the people back in charge, and then put the tools in their hands.

While relatively few people attended Camp Obama or had access to the database made available to the official community organizers, I suspect that most voters did have access to - and did utilize - the other "secret weapons" used by the Obama campaign mentioned in the Wired article referenced above: the Internet and psychology.

So, although these interviews and articles are focusing on the formal community organizers, in some sense, it seems to me that the real impact of the Internet in this campaign - which was effectively promoted by the participatory approach embraced by Obama, Ganz and a legion of others - was to empower and engage people at the edges of the network(s). 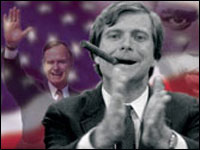 As Arianna Huffington noted, the winner of the 2008 election was the Internet (and its users), and the loser of the 2008 election was Rovian politics [although, having listened to another segment in the same On The Media episode, The Dirty South, which incluced an interview with Stefan Forbes, director of Boogie Man: The Lee Atwater Story, who reviewed the dark legacy left by the "southern strategy" developed by Rove's mentor - "spin when you can, change the subject when you can’t and if all else fails, mine the voters’ resentment, and fear, usually of blacks" - I hope that what we have really witnessed is the end of Atwaterian politics.].

In any case, it seems to me that what the growing participatory affordances offered by the Internet, and Web 2.0, are ushering in an era of universal deputization of community organizers. I'm just glad that Obama, Ganz and their lieutenants had the experience and insight to ride this wave more effectively than their opponents.

The McCain campaign certainly had their own network of community organizers - as Ganz noted, the religious right had a very strong, pre-existing network ... although in my judgment, the fundamentalist and dogmatic orientation of many of these groups creates a different kind of network than one that is more open to diverse opinions and backgrounds (an "unfair" advantage, perhaps, among the differences between conservativism and liberalism I mentioned in an earlier post).

I am reminded of the classic Pogo cartoon, "we have met the enemy, and he is us" ... and thinking that perhaps this new movement represents a new twist on Pogo's observation:

We have met the community organizers, and they are us.

A recent USA Today / Gallup poll suggests that a majority of us share this hope, and although I believe hope and dreams trump fears and smears, I also believe that, by itself, hope is not a strategy. Ganz noted the effectiveness with which the right has historically - at least in the Atwater / Rove era -  been able to translate values into actions ... it now remains to be seen whether / how we can translate hope into post-election actions.