The Community Collage at Trabant: a Proactive Display in a Cafe 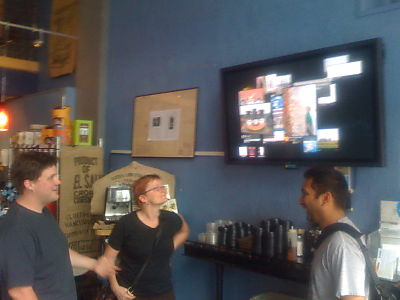 We recently deployed a proactive display application at the Trabant Coffee & Chai Lounge in the University District of Seattle. The Community Collage (or CoCo) shows a dynamic collage of content drawn from a pool of photos and quotes uploaded to the CoCo web site by customers and staff. When customers visit the café and use their Trabant loyalty cards, their content gets a higher priority to be selected for insertion into the collage. Anyone can visit the web site to view a chronological stream of content that has been shown on the collage, but only registered users can vote or comment on other users' content, post messages on the site's MessageBoard, or send short text messages directly to the CoCo display. 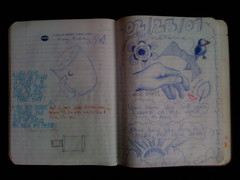 The owners of Trabant, Tatiana Becker and Mike Gregory, along with the baristas and customers at the coffeehouse, have co-curated a creative community space, and we are delighted to have the opportunity to work with all of them. The art on the walls and the music being performed on Mondays (open mic) and weekends reflects some of this creativity, but one of the strongest markers of the creativity that flows through the space is the sketchbooks Trabant has put out on tables in the coffeehouse that various people have contributed to over the years. The sketchbooks reveal a wide variety of depth and breadth of individual personal introspection and community-oriented social, political and artistic commentary - as well as conversations and connections being formed as people riff on each others' words and pictures across space (pages) and time ... a form of reciprocal self-disclosure. One of our goals in deploying CoCo at Trabant is to offer a new channel for expressing this creativity and revelation to all members of the community. 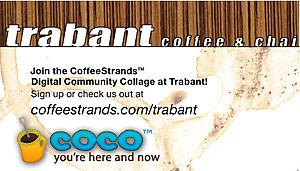 Given our goal of situated or place-specific community development, we are restricting the population of users to people who visit Trabant. We have printed up business cards (shown to the left) - or perhaps we should call them "community cards" - with a link to our web page, and an invitation code on the back. Customers can pick one up when they visit, and either create an online profile for themselves during their stay (Trabant offers free WiFi - in addition to great coffee) or at a different time or place. The profile enables users to upload photos explicitly, and/or provide a link to their Flickr photo sharing account (if they have one), in which case their Flickr photos are uploaded implicitly. They can also add any number of inspiring quotes to their profile. 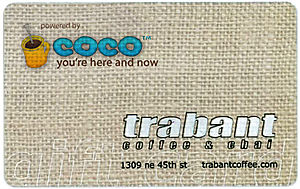 If CoCo users have a Trabant loyalty card (shown to the right) they can enter the code on the back of that card to their profile, so that whenever they use their loyalty card at Trabant, their profile content will be featured more prominently on the collage. The loyalty card is not required: the collage draws content from all users, but it will give priority to those who have - and use - the loyalty cards. And as noted above, anyone can view the content being shared by members of the Trabant community - on the display or on the web site - but only members who have created profiles can vote or comment on the content, or send messages to the MessageBoard or the display itself.

We call CoCo a proactive display because it senses and responds to the people in a physical space (in this case, a coffeehouse). Although it has an interactive element - people can indirectly interact with the display via the web site - it's primary mode of operation is proactive, showing content relating to people it senses nearby. Earlier examples of proactive displays have involved the use of infrared badges, RFID tags and Bluetooth phones for sensing people, and have been situated in workplace or conference contexts. This is the first time we've deployed a proactive display "in the wild" - a place where you don't need an ID badge to enter, and where the community (and, presumably, the content) is considerably more diverse. We are currently using the Trabant loyalty cards for sensing who is in the coffeehouse, and we currently require an explicit card swipe by the user, but we plan to incorporate other sensing capabilities and explore better integration with existing practices and systems as we progressively refine the design and development of the application.

CoCo is not the first system designed to augment the social space of a cafe. My friend Elizabeth Churchill and her former colleagues at FXPAL created the eyeCanvas, a large touchscreen display that showed content relating to the Canvas Gallery in San Francisco, the place in which it was deployed for a 4-week pilot, and allowed visitors to contribute "finger scribbles" they could draw on a virtual canvas shown on the display. While the Canvas Gallery owners had a profile, of sorts, other users did not have persistent profiles or the ability to upload images (they could, of course, draw images or handwrite quotes to share); I believe this limitation reflected the preferences of the owners rather than the system designers ... and am glad the owners we're working with are so open about enabling other people to share their stuff, on paper (sketchbooks) and now on the big screen.

Another friend, Sean Savage, created PlaceSite, a place-based community web application that enabled people in a cafe to create and share profiles. Unlike CoCo, PlaceSite did not have an associated large display, and the system was more conservative with respect to privacy and did not allow people outside the cafe to access profiles. PlaceSite was piloted at a few coffeehouses in the San Francisco Bay area in 2005 and 2006, but it's interesting - one might even say synchronistic - to note that Sean started formulating the early designs and site selection criteria for the system during his internship with me at Intel Research Seattle in the summer of 2004. He'd even identified Trabant as a promising site, but for a variety of reasons I've alluded to elsewhere, the local Intel lab was not a conducive place to continue pursuing this kind of work, and he decided to postpone deployment until he returned home to the UC Berkeley iSchool, where he was finishing up his master's degree. 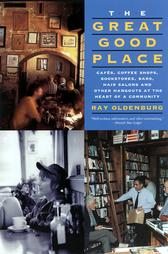 CoCo, eyeCanvas and PlaceSite are all examples of what we might call situated social software - participatory systems designed to reflect the rich digital lives of the people, by the people and for the people in a shared physical space, and [thereby] to promote conversation, connection and community in a quintessential third place. Unlike mobile social software, which enables people to use their mobile phones to maintain connections with their remote friends regardless of time and place, our goal is to use technology to help people establish new connections - or improve existing ones - with the people with whom they are sharing time and space. A quote by Will Rogers captures the essence of this goal:

A stranger is just a friend I haven't met yet.

Many coffeehouses offer wireless Internet (WiFi) access, which enables people to maintain remote connections to their friends in online social networks such as MySpace and Facebook via their WiFi-enabled laptop computers or smartphones. While these online communities offer great value, the cost of maintaining connection with virtual communities is the consequent disconnection with the physical community. Perhaps this is a new variation on Timothy Leary's famous exhortation, "turn on, tune in, drop out": people turn on their laptops, tune in to their online social networks and virtually drop out of contact with the people, places and things around them in physical space.

James Katz offered a great quote in "The New Oases", a recent article in The Economist, describing the impact of WiFi on some of the coffeehouses that offer it: "physically inhabited but psychologically evacuated". Three years ago, I - and others - wrote about the costs and benefits of WiFi use in coffeehouses, triggered by a report that another local coffeehouse - Victrola - had decided to turn off the WiFi on weekends to encourage people to tune in to the people and other things physically present in the place. Trabant offers full-time WiFi, and while we don't want to prevent people from connecting to their virtual communities or compel them to engage with people in the physical coffeehouse - ambience, glanceability and plausible ignoreability are three important design criteria for the collage, to ensure that coffeehouse visitors can [still] enjoy their aloneness together - we want to offer new opportunities to connect with their proximate community.

I've been spending a great deal of time at Trabant lately, and although I spend some of that time virtually tunneling out through the WiFi, CoCo has already helped me learn new things about - and engage in conversations with - the owners, baristas and other customers ... including my creative colleagues on the Strands Labs Seattle team (three of whom - Richie, Shelly and Yogi - are shown in the photo at the top ... and all of whom are, I should note, primarily responsible for the design, development and deployment of CoCo ... I'm just the "front man"). The mission of Strands is to help people discover things they like and didn't know about; CoCo represents a physicalization of this mission, migrating from the online to the offline world(s). We hope that other members of the Trabant community will find that CoCo helps them discover delightful new dimensions of the people, places and things around them!

[Update, June 2009: we've published a paper - "Supporting Community in Third Places with Situated Social Software" - and gave an associated presentation (embedded below) on the system, now called CoCollage, at the 4th International Conference on Communities and Technologies (C&T 2009). Unfortunately, while CoCollage is no longer deployed at Trabant, it can be found in over 20 other venues around Seattle.]