We're delighted to be joined by two designers at Strands Labs Seattle: Josh Lind and Daniel Norman. Although all of the other members of the team have some knowledge of and experience with design, none of us has been trained as designers, or see that as our primary skill set. With the arrival of Josh and Dan, we have considerably increased our general and specific design capabilities.

Josh Lind, a local web designer/developer and co-founder of ReadyDone, a talent agency for design, web development and business services, joined Strands Labs Seattle a few weeks ago as a contractor. Josh is a friend of Shelly's, and designed the logo for Swaggle (shown below right), one of the applications created by the company Shelly co-founded, Waggle Labs, and has done some user interface design and development for YourSports, another local startup company that used to be located across the street.

Josh brings considerable skills in web design and development, a keen sense of social computing, and [I was pleasantly surprised to discover] a prior awareness and appreciation of some earlier incarnations of proactive displays - large computer displays that can sense people nearby and show content related to those people and their activities in a shared physical space. We're delighted to have him working with us on designing and developing our next generation proactive displays

Dan Norman is a graphics designer with experience in both print media and motion graphics (as well as other areas) who recently graduated from Cornish College of the Arts. I discovered Dan via an announcement of the Cornish BFA Art & Design Exposition, showcasing the work of graduating seniors, that I saw on some online event listing site (perhaps upcoming.org). After perusing every project on the page, Dan's project, (ad)infinitum, really stood out. It is a dynamic - and dramatic - large screen visualization of pictures from magazine advertisements and tags that people have associated with those pictures. The visualization is very closely related to what we hope to do in our next generation proactive displays. 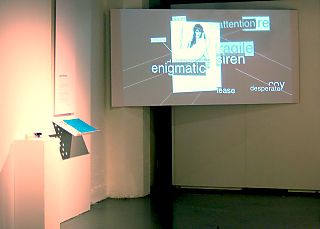 Delving into Dan's design notebook for his project (a photo of the installation is shown right) - in which he delves deeply into interesting and relevant areas such as semiotics, psychology and linguistics, and their application to advertising - provided further confirmation that our project would benefit a great deal from his involvement. One of the things that resonated most deeply with me was his observation that "the viewer is a co-author", which I believe applies much more broadly than the world of advertising (and I believe Dan believes this, too). Proactive Displays are, in many ways, a vehicle for co-authorship: layering people's personal interests - represented by their online media - in the physical spaces they share with others, actively invites co-authorship among the inhabitants of those spaces ... and our new generation of proactive displays will offer even more ways for people to co-author the content that shows up on a community display. We are delighted that he accepted our offer to join us ... and to do so early enough to help smooth the transition of responsibility for the new dynamic visualization that Sameer has designed and developed for us during his [nearly completed] summer internship with us.

We will be sharing the fruits of all these labors very soon.