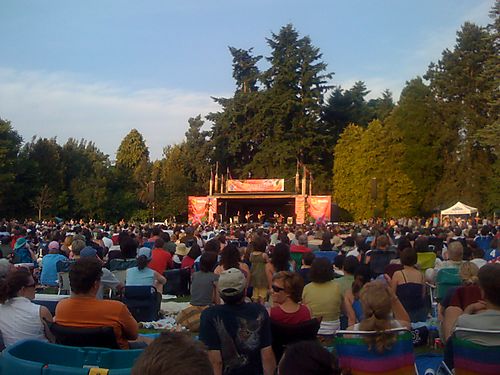 The Indigo Girls gave a concert Sunday night at Woodland Park Zoo's Zoo Tunes 2008 Concert Series that was, note for note, the finest music I've ever seen and heard live. I've attended - and reviewed - a fair number of other great concerts, but all of them have had at least one relative "low spot": one or more songs that just don't inspire or otherwise positively affect me (such low spots, of course, open up opportunities for bio breaks, of course). Last night's concert was just one, long, uplifting set, with no dips whatsoever ... which was fortunate, as I'd heard that lines for the honey buckets can get long at the Zoo Tunes concerts.

The concert was held on the closing day of Seattle PrideFest, and while it was not an official part of that event, it was clear that a large proportion of the audience was made up of gay and lesbian fans. I have a vague recollection of hearing / reading something about Amy Ray and/or Emily Saliers being lesbians, but I guess that sort of thing just doesn't matter to me - connection and alignment with spiritual and/or political views matters far more than sexual preferences, and I was reminded throughout the concert just how strong of an alignment I feel toward the music of the Indigo Girls.

I'm embarrassed to admit that while I've long been a fan of the Indigo Girls, and I recognized most of the songs they played, I didn't know the names of many of their songs (I scratched a few notes on what sounded like key lyrics in each song, and was able to search out the titles in composing the set list below). The rest of the audience, though, clearly knew the lyrics to many of these songs. I was initially surprised at the audacity of inviting the audience to sing along on the third verses (vs. choruses) of at least three songs - how many people know the third verse to, say, America the Beautiful - but the Indigo Girls clearly know their audience, and their audience knows them, as people were singing along loud and strong.

I'm also embarrassed to admit that I hadn't listened closely to many of their songs, but given the opportunity of a warm summer evening to relax and listen attentively, the "goose bumps" were flowing with every song (most significantly during "Galileo" and "Closer to Fine"). I have always enjoyed their music, but in the setting of the concert, I found deep, emotional resonance with nearly all of their lyrics. It dawned on me that by the time the band was producing commercial albums (1988), I had become more immersed in my "professional" vocation - I was a professor of computer science while in grad school to get my Ph.D. in the field - and less attentive to the domain of my early vocation - leader, lead guitarist and songwriter in a band I formed while in high school (two of whose five members are no longer alive). Thus my "use" of music had largely shifted from being a primary focus of attention to a background accompaniment as I read, thought about, taught about, and wrote code for and papers on technology projects. I don't foresee a big shift [back] in the near future, but I have been feeling a growing reconnection with my musical roots over the past several months, since joining Strands. 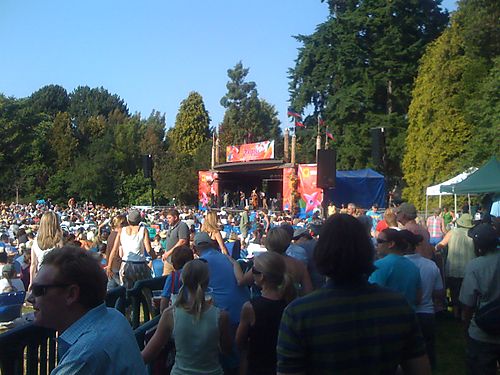 Getting back to the concert, Coyote Grace opened for the Indigo Girls, playing a great folksy bluegrass set to warm things up. Unfortunately, Amy (my wife) and I were in the beer garden for most of their 45-minute set, and with a cup of beer in my hand, I did not take any notes on their songs. However, when we got back to our blanket, just before they finished, I was surprised to hear one of the main duo, Joe Stevens, say something about "when I was a young girl" during an introduction to a song. Fortunately, I had my iPhone with me, so I opened up my Safari browser, googled "coyote grace" and read about their tag line - "Girl meets Girl. Girl becomes Boy. Girl and Boy become a band." - and further on, about how Joe is a "transman" (a term I hadn't read or heard before, but could instantly understand given the context).

Brandi Carlile, who has been touring with the Indigo Girls, made several appearances throughout the show, and her entire band, along with Coyote Grace, came out to join the Indigo Girls for their final few songs. Amy and I'd seen her play at Chateau Ste. Michelle a year or two ago, and enjoy her music (though not as much a the Indigo Girls ... and, to be honest, not as much as we enjoyed Coyote Grace, either). I'm not sure why Coyote Grace was the opening act for this particular show - perhaps something about it being PrideFest? - but we were glad to have the opportunity to enjoy some exposure to some great new music.

Before closing with the set list, I wanted to share a few tips for anyone considering attending a concert at Woodland Park Zoo. We parked in the south lot (off NE 50th Street, just west of Stone Way). Parking was easy - in and out - but it was a long walk to the concert grounds, which is at the north end of the zoo grounds. We lined up at 4:00 at the south gate, and were probably among the first 20 people in line. However we did not get very close to the stage, so next time, we'll try parking - and lining up - near the north gate or west gate. We set up near some shade near the back, but the shade shifted ... and we were sitting near a number of people who seemed more interested in talking with each other rather than enjoying the music (as a primary focus of attention). Next time we'll try getting close to the stage and forego the prospect of shade ... and I'm really glad that we have premium seats for the upcoming James Taylor show (one of our worst concert experiences was trying to listen to James Taylor at Tanglewood in the early 80s amid all the gabbing people who paid general admission for a nice summer evening picnic that just happened to have a live performance nearby).

Speaking of James Taylor - who we'll be seeing at Chateau Ste. Michelle in a few weeks - reminds me of one more thing I wanted to mention: rock stars, and how well they "age". We've seen James Taylor three times over the past 25 years, and he has put on fabulous concerts every time. In contrast, we were rather disappointed in the Crosby, Stills and Nash (CSN) concert at Chateau Ste. Michelle in 2004: the vocal range of all three had diminished considerably over time - especially Stephen Stills, still one of my guitar heroes - as had their energy ... and ability to energize me. Fortunately, though, when we saw Crosby, Stills, Nash and Young (CSNY) at White River Amphitheatre last year, the addition of Neil Young was a tremendous energy boost, and that concert was great.

There was no visible or audible signs of "wear" in the Indigo Girls - they still have full vocal range and lots of energy ... although they have only been performing (in the large) for half as long as either Taylor or CSN[Y]. One thing I was rather surprised at, though, was the relative absence of politics throughout the concert. The CSNY concert last year was very political - almost uncomfortably so (but I think that was their goal) - and I would have thought the Indigo Girls might also use their podium to promote political causes. They did promote a couple of "get out the vote" organizations, but other than that, they just played their music. We did see a cardboard life-size figure of Barack Obama being carried into the concert, but there were no endorsements of candidates - or causes - during the concert. I suspect that there were few registered Republicans at the concert, and given that the Democratic Party primary is over, perhaps they figured there's no sense preaching to the choir. I do have the audacity to hope, though, that this rather apolitical appearance does not reflect apathy among these voters.

Anyhow, here is the set list, as far as I can make it out:

Posted at 08:48 AM in Events, Family and Friends, Music, Places and Spaces | Permalink | 0 comments