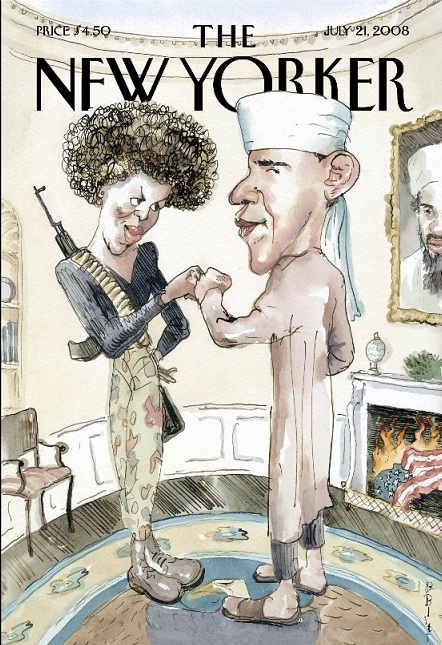 The New Yorker published its July 21 edition this week, with a cartoon on the cover depicting U.S. Senator and presidential candidate Barack Obama and his wife, Michelle, in a way that reflects some of the worst fears of what I suspect is a nontrivial percentage of the electorate. On the cover, shown on the right, Barack is wearing a turban, Michelle is sporting an AK47 assault rifle and ammunition belt across her chest; the pair exchange a "fist bump" under the gaze of a turban-bedecked Osama bin Laden in a portrait hanging over a fireplace where an American flag is burning. The cartoon has a caption "The Politics of Fear", but this listed on the bottom of page 2 rather than on the cover.

I have no doubt the cartoon is intended as a satirical critique of some of the more egregious and hyperbolic extrapolations and projections that have been appearing in the press, e.g., Fox News anchor E.D. Hill using the infamous Fox News question mark to make sideways editorial comments (which I've intentionally invoked in the title of this post) in asking "A fist bump? A pound? A terrorist fist jab?", unsubstantiated rumors of a video of Michelle Obama making "anti-white" statements, the ridiculous controversy over Obama's [earlier] refusal to wear a flag pin, and, most recently, a Newsweek poll released on Friday that reported some surprising statistics about how many people believe various flavors of the rumors about Obama's connection to Islam:

Twelve percent of voters surveyed said that Obama was sworn in as a United States senator on a Qur'an, while 26 percent believe the Democratic candidate was raised as a Muslim and 39 percent believe he attended an Islamic school as a child growing up in Indonesia. None of these things is true.

This follows an earlier Pew Research poll released in March showing that 10% of Americans believe Obama is Muslim; among those most likely to believe this are people in rural areas (19%), white evangelical Protestants (16%), conservative Republicans (16%) and people who never attended college (15%).

What I wonder is how the satirization intended by the cartoon is likely to affect the level of misinformation about Barack Obama - will it decrease the misinformation by opening up a dialogue (through all the controversy it is engendering), or will it increase the misinformation - and misinformedness - due to the media's echo chamber effect ("a group of media outlets that tend to parrot each other's uncritical reports on the views of a single source, or that otherwise relies on unquestioning repetition of official sources") and confirmation bias ("a tendency to search for or interpret new information in a way that confirms one's preconceptions and avoids information and interpretations which contradict prior beliefs").

In my last post, writing about my experiences at Foo Camp 2008, I noted a session in which a prominent former blogger was subjected to online harassment with strong sexually-oriented and violent images, e.g., a Photoshopped image in which a noose was inserted in a photo of her head and neck and another Photoshopped image that superimposed a pair of panties over her face in a way that might be interpreted as muzzling or suffocating. Some of the people defending the authors of these images and similarly harsh words posted in an online forum dedicated to harassing this woman claimed that these were intended as "satire", and that she and others were simply taking these words and images too seriously. I found myself wondering what the response might have been if similar images had been created and posted with, say, Hillary Clinton as the target of the "satire" ... I suspect the FBI would have been involved and arrests would have been made. I now wonder what the reaction would be if Michelle Obama had been the target ... and even wonder whether she already has been such a target (!).

I'm hearing similar "overreaction" sentiments being expressed about the New Yorker cartoon - that people who are reacting negatively are simply taking it too seriously. I do tend to take things too seriously at times, but I'm not alone ... and I wonder how many "serious" people are - or were - in the "undecided" category of the U.S. electorate. The "satire" directed against the aforementioned blogger led to her departure from the blogosphere, and while I don't think the "satire" directed against [the people who spread or believe rumors about] Barack Obama will cause him to drop out of the race, I am concerned that this may negatively affect his chances for being elected president.

Despite numerous reports over the last several years that Saddam Hussein had no connection with the 9/11 attacks, an earlier Newsweek poll suggests that a surprisingly large proportion of the American public believe there is a link:

Even today, more than four years into the war in Iraq, as many as four in ten Americans (41 percent) still believe Saddam Hussein's regime was directly involved in financing, planning or carrying out the terrorist attacks on 9/11, even though no evidence has surfaced to support a connection. A majority of Americans were similarly unable to pick Saudi Arabia in a multiple-choice question about the country where most of the 9/11 hijackers were born. Just 43 percent got it right -- and a full 20 percent thought most came from Iraq.

[I cannot find a direct reference to this poll on the Newsweek site, purportedly reported in June 2007 ... so maybe I'm just spreading rumors here ... the second-hand reports of the poll certainly confirm my biases.]

I hope we'll soon see additional polls to determine the impact of this controversial cartoon. Among the questions I'd be interested to know answers to are:

And, of course, on November 4, we'll know the outcome of a much more important poll ... the question is whether we'll know how much this "satire" has affected that outcome.