James Taylor and Other People's Music: A Concert Review 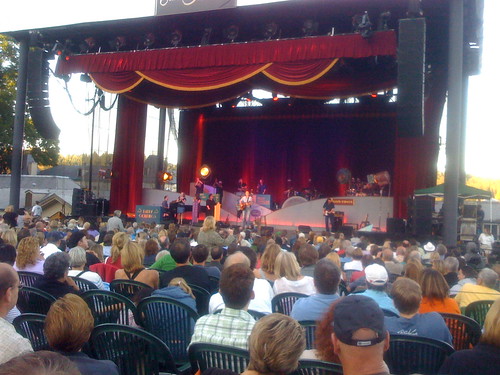 James Taylor and his Band of Legends gave a great performance at Chateau Ste. Michelle Monday night. I was particularly impressed with the harmonies provided by his backup vocalists and the rhythm laid down by his bassist, drummer and percussionist, but the entire band was strong ... one might even say "legendary". The legendary JT himself still has plenty of energy and a full vocal range (unlike some other aging performers we've seen in concerts at CSM). And as with other CSM concerts we've attended, the weather was perfect, the setting was beautiful, the food and wine was very good - I enjoyed a tomato basil sausage from The Frankfurter (Amy thought the skin on her Southwestern sausage was a little tough), and we particularly liked the 2006 Chateau Ste. Michelle Cinsault - and the music was enjoyable. However, as with most of the concerts we see there, the music was not quite as good as I'd hoped.

The music was very good - Amy thought it was great - it just didn't move me the way I'd anticipated ("something in the way she moves..."). Many of James Taylor's early songs rate high on my "goose bump" scale, and he did play a few of these songs (Country Road, Mexico, Shower the People, Carolina on my Mind, Your Smiling Face), but most of the songs he played (13 of 25, by my count) - were other people's music. Now, some of these cover songs are also among my favorite JT hits - e.g., You've Got a Friend (written by Carole King, who made a surprise appearance at his July 4 concert and 60th birthday celebration at Tanglewood, where we'd seen him play around the time of his 40th birthday) and Everyday (by Buddy Holly). And, of course, "covering"often works both ways: Steamroller Blues, a JT song, was also recorded by Elvis Presley ... who did not make a surprise appearance on this tour (as far as I know). In any case, the performances on all the songs - originals and covers - were great, it's just that I generally connect more deeply on an emotional level with the JT originals.

As Taylor noted in his introduction to You've Got a Friend, he started performing the song while he and Carole King were both starting out sharing a stage - and a backup band - at the legendary Troubador club in Los Angeles, after he figured it out on guitar (she performs it on piano), but "little did I know that I'd be singing it every night for the next 40 years". He noted that there are far worse "prison sentences" ... but his comment did help provide some context for why he may be performing more of other people's music as time goes by. Meanwhile, I still have my old JT CDs - and I suppose I can get a copy of One Man Band, his new CD of his old music (performed live) - if / when I want to walk on down memory lane.

A number of people came away from the concert with more concrete memories. During the first set, JT autographed someone's guitar between songs, and during the intermission, it looked like he was signing album covers, CD jackets, T-shirts, at least one other guitar, and other assorted writing surfaces. The second set had a larger proportion of JT originals, so I was warming up as the outside temperature cooled down (though it was not nearly as cold as the people who attended his second show at CSM last night). However, unlike the recent Indigo Girls concert we attended at Woodland Park Zoo, where they invited the audience to sing along - on the third verses (!) - of several of their songs, JT missed many opportunities to engage the audience in a sing along ... though many of us in the audience were singing along loud and clear on his classics anyway. He finally invited us to sing along at the end of the encore set, on How Sweet It Is (To Be Loved By You).

All in all, it was a nice evening. We bought reserved seats rather than lawn seats, in large part due to the fact that we got the last two tickets left for either show 45 minutes after they went on sale (and there were no general admission tickets). But we were already considering the reserved seats due to a bad experience on the lawn at Tanglewood the last time we saw him, about 20 years ago, where we were seated next to a bunch of people who seemed more interested in conversation than music appreciation. This time, we got to appreciate the music more directly ... I just wish there'd been more of his music to appreciate.

Posted at 07:16 AM in Events, Family and Friends, Music, Places and Spaces | Permalink | 0 comments