Brady Forrest (O'Reilly Radar) was MC for the event, and he started things off by introducing some of the organizers and sponsors of Thingamajiggr, a few people who plan to run workshops at BarCampSeattle this weekend, and other friends. Adrian MacDonald (911 Media Arts Center and Editor of On Screen Magazine) gave a whirlwind tour of the projects going on at the 911 Media Arts Center [Note to self: see if I can entice my kids to enroll in one or more of their youth programs.] 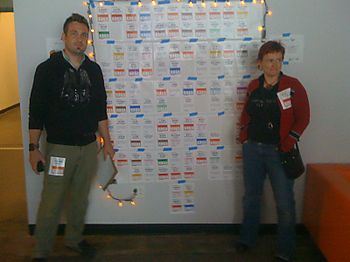 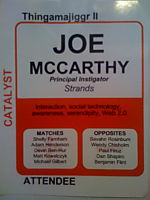 Brady then introduced Shelly Farnham (Co-Founder of Waggle Labs, and part-time consultant at Strands Labs Seattle) who gave us an overview of Pathable, a lightweight social networking tool for events where people are matched based on social tagging data that is printed on badges, which was being used at the party (and BarCampSeattle). Thingamajiggr attendees who preregistered could peel off their badge from the wall near the entrance (see left photo, with Shelly and Waggle Labs partner Peter Brown) and place it somewhere on their body - some placement sites offer better viewing than others, of course. The badges include attendees' names, title, affiliation, category, a few self-describing tags and a list of people who are "matches" and "opposites" (based on those tags and perhaps other profile information on the web registration form (see my badge, in the right photo). It's a great idea, but I do admit some nostalgia for the stamped round metal buttons they used last time I was a Pathable participant, at FOO Camp 2007.

We were then treated to a preview of the upcoming Seattle Power Tool Drag Race & Derby by Rusty Oliver and Divide of the HazardFactory. The event involves people reconfiguring power tools - some of which have been augmented with flame spewing attachments - to run on a race track. The videos of past events provide a much more effective sense of the chaotic fun than any words I could use to further describe it. 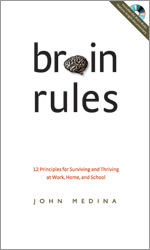 John Medina, author of Brain Rules, was the first of the headline speakers at the event. After making a wry observation about the brain having evolved to learn in outdoor environments, in near constant motion - and how most lecture halls (such as the one at 911 Media Arts Center), classrooms and office environments are thus antithetical to promoting learning - John focused our attention on what he called the attentional spotlight in the brain, and helped us understand why people don't pay attention to boring things (Rule #4). Demonstrating attention to attentionality, John frequently paused throughout his talk to ask us "Do I still have your attention?" - an unnecessary question, as he is an extremely engaging speaker.

The brain processes meaning before detail, and this meaning has evolved based on how the brain perceives the answers to three sets of questions:

He then went on to claim that the attentional spotlight in the brain (Brodman Area 10) is sequential - it cannot truly multitask (i.e., process tasks in parallel). Although frequent task switching (which many of us call multitasking) appears to be increasingly the norm - for example, he average computer user has 17 windows at any given time (I currently have 25 open, but it's early on a Saturday morning) - it is not very effective, at least as it can be measured with respect to time to completion and error rates on tasks. In experiments comparing task switching to uninterrupted time on task, the time to completion of a task in the task switching condition is twice as long as in the uninterrupted condition, and results in 50% more errors. 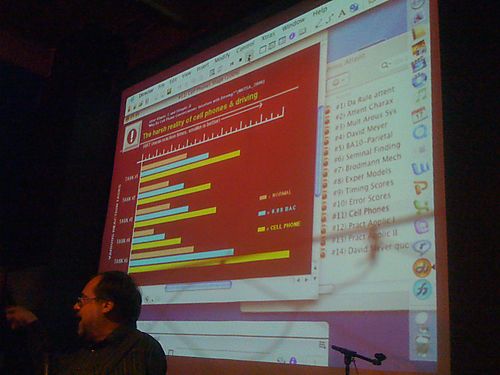 Among the implications of these results are the dangers in using mobile phones while driving. John presented a chart - shown on the right - comparing the mean response time (MRT) of people under three conditions: normal, legally drunk (blood alcohol content of 0.08) and talking on a mobile phone (while sober). The chart shows that the MRT for a sober person talking on a mobile phone is considerably longer than for a person who is drunk. This is because when you talk with someone on the phone, you are visualizing them, in the same way as you visualize characters and scenes in a book by Faulkner or Tolkien (for example). Thus, your attentional spotlight is drawn away from your real world activity (e.g., driving) and into an imaginary world ... and this happens whether your mobile phone is in your hands or not (i.e., "hands-free" use of mobile phones). [I imagine that listening to audiobooks while driving would be just as dangerous as, if not more dangerous than, talking on a mobile phone while driving ... so perhaps we'll see some laws prohibiting this combination of activities in the near future.] John noted that talking with someone on a mobile phlone is qualitatively different from talking to someone next to you in the car, because in the latter case your brain does not have to visualize or imagine your conversation partner - they are part of the real world scene. It is also different from listening to music ... except when listening to really good music - what I like to call "goosebump music", but which John referred to even more evocatively as delivering a dopamine lollipop - that has strong personal meaning to (and effect on) you ... so perhaps we'll see prohibitions against listening to meaningful music while driving, too. Personally, I think that the most dangerous driving situation is a parent with small, unruly children in the back seat, so if we really want to make our roads safer, we ought to prohibit that as well ... but I digress (do I still have your attention?).

I'll wrap up this section by noting that in thanking John after his talk, Brady noted that his book was published by Pear Press, which walks the talk of uninterrupted task focus by publishing and promoting only one book per year (!). 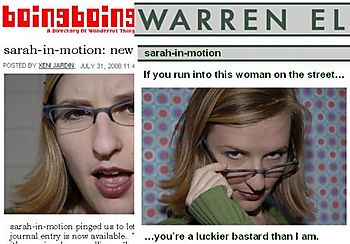 Scotto Moore was next up, presenting Intangible Method, A Digital Fairy Tale [Scotto's talk held my attention so effectively that I never even thought to take a photo, so I'll insert an image from his web site.]. The fictional story - created in the summer of 2006, and set in the summer of 2008 - is about a woman, known only as sarah-in-motion, who's everyday activities are captured and posted to the web ... by someone referred to as IntangibleMethod. This starts off with a daily series of YouTube videos on "sarah's walk to work", each of which generates tens of thousands of views and hundreds of comments. The videos eventually move off the street and into her home with a series "sarah around the house". After she is BoingBoinged, she becomes totally immersed in the online postings of and about her, and things start changing for the worse, leading to her losing her job, her house, and eventually prompting a series of darker videos: "sarah sleeps in park", "sarah looks for change", "sarah spots new doorway". The ending brings the plot full circle again, with a provocative note from sarah-in-motion: ""my body was just an avatar. see you in second life." Scotto finished off promoting his upcoming play, Interlaced Falling Star, epic science fiction told on a budget of under $300, showing at the Annex Theatre from July 25 - August 23.

Dan Savage, author of the Savage Love column and blog (or slog), rounded out the evening presentations. Brady didn't remember the exact title of Dan's column during his introduction, and so Dan reminded him (and us) several times during the presentation that he has been writing this column for 17 years (or, as he frequently directed the reminder toward Brady, "longer than you've had pubic hair").

Dan led off by telling us that he sees his job (if not his mission) as "abstinence reprogramming" for college students, trying to undo the damage wrought by $1.2B in federal government funding during the Bush administration for sex education programs that promote ignorance as a virtue and amount to nothing more than "reproductive biology". He likened the way we typically teach sex education in our schools to driver's education that teaches students how a car's internal combustion engine works, rather than informing them about turn signals, traffic signs, how to avoid accidents and other rules of the road.

If John Medina's refrain was "Do I still have your attention?", Dan's refrain was "Any other questions?" After his introductory remarks, he spent the rest of his time in a question and answer session with the audience of about 100 people.

Responding to a question about how the Internet had affected the newspaper column profession, Dan complained that the web, and weblogs in particular, "ruined a sweet deal" for newspaper columnists: he used to get by working for two days, scrambling over the weekend to get the paper out, and then spend three days getting high and watching movies (telling his editors that he was trolling for materials). The news cycle is no longer weekly (as at The Stranger), daily or even hourly, but momently. And with the advent of web 2.0, it's no longer enough to simply write blog entries, with podcasting, everyone has to be a radio station, and with YouTube, everyone has to be a TV station.

However, there have been some advantages. Before the Internet, he was frequently asked for referrals or define terms - both of which are now easily accessible to anyone with a web browser. He also used to receive long, flowery descriptive letters of various genital sores, now he gets digital photos of them in email ... from people who are, ironically, too embarrassed to go see a doctor about treatment. He may turn these photos into a flipbook ... although there have been some drawbacks to these emails, as he related a funny story about a time when one popped up unexpectedly when he was on an airplane flight, and a woman called out ("Oh my god, he's masturbating!"). 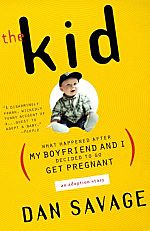 Interestingly, despite his promotion of openness, he reported that his son has never seen a computer, a copy of The Stranger or the book Dan wrote about adopting him, "The Kid: What Happened After My Boyfriend and I Decided to Get Pregnant", despite the fact that many other kids his age have cable TV in their bedrooms. When people started clapping, he counseled "Don’t be smug Seattle applauders".

Dan also shared a funny story about an interview he conducted with a man who married his horse on his Savage Love Radio. At the end of the interview, he asked, "Are you married to a boy horse or a girl horse?" Drawing himself up rather huffily, the man replied, “I am not a homosexual!” ... even people who practice bestiality have to draw the line somewhere, I guess.

All in all, it was a great set of talks, and although I didn't stay long afterward, many of the people in the audience - seemed just as interesting as those presenting at the front of the room. I'm sad I am missing BarCampSeattle this weekend, as I'm sure many of these people will be leading sessions at the unconference, but I'm glad that I at least got o enjoy a little taste of the local tech community at Thingamajiggr!