Home Archives Profile Subscribe
Religion, Politics, Racism and Invisibility: Obama and Wright vs. McCain and Hagee
What Would Your Toaster Say to Your TV? 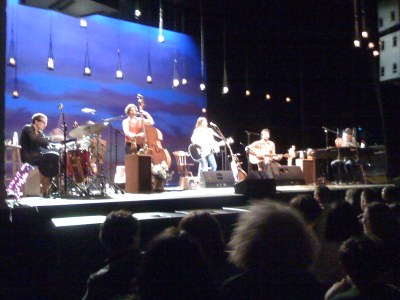 KT Tunstall and her band of mostly unplugged musicians gave an energetic performance at The Moore Theatre in Seattle last night. The music was drastically fantastic, and her rapport and repartee with the audience was light-hearted and engaging.

I first discovered her through spam - one of the weekly emails RealNetworks used to send out to everyone who registered a downloaded RealPlayer application had a link to a live solo performance of Black Horse and The Cherry Tree. I loved the music, the words, the energy, and her ingenious use of recording technology to produce an amazingly full sound with just her voice, hands, and guitar.

I bought her first album, Eye to the Telescope, immediately thereafter, and it became an instant favorite. It has several "goosebump songs" - songs that evoke a strong visceral reaction every time I hear them [BTW, on a related note, I see that David Huron is scheduled to present a paper on "Music-evoked Frisson: How Music Produces Gooseflesh and Why Listeners Enjoy It" at the Music and the Brain Conference at Stanford next week]. Last night, hearing several of these songs live also brought out the goosebumps.

Her live performance of many songs on her second album, Drastic Fantastic, with which I was initially somewhat disappointed - as I nearly always am for every artist's second album (with the exception of Sheryl Crow) - helped me better appreciate her more recent music ... especially her mesmerizing rendition of "If Only". That said, though, none [yet] qualify as "goosebump songs".

Another dimension of enhanced appreciation is for the drummer / percussionist in her band, Luke Bullen. We were sitting about 20 feet from him, and had a closeup view of the variety of instruments he employed - and how he employed them (often in interesting combinations) - to provide the base for that combination of strong bass beat and nuanced rhythms that characterize so many of her songs.

On the way home, Amy asked whether I thought KT Tunstall is a lesbian - not that this would affect our enjoyment of her or her music. I hadn't picked this up in her music, although upon reflection, I do see there is some potential ambiguity as to the gender of the people she sings about. I also noticed a number of lesbian couples in the audience at the show. In googling around, I discovered a Pink News report that although she enjoys and appreciates her following among the lesbian community, she is not gay ... and her boyfriend - drummer Luke Bullen - also enjoys and appreciates that following ... and this information enabled me to better appreciate how and why they seem to form such a great musical groove on-stage (and in recordings).

It was pretty apparent during the show that she also has a strong following from heterosexual males, and is used to bantering with them from the stage. During the break between the first two songs, one man shouted out "I love you" - to which she responded "Thanks ... I love you too". Shortly thereafter, during another break between songs (which frequently included guitar switches), she introduced her new 12-string guitar, which she picked up in Santa Barbara - and so she named it "Barbara" - after which this same man shouted out "I love your guitar", to which she responded "You stay away from my guitars!".

Another interaction started with her leading us in practicing "the first ever Seattle group body pop" - three moves including "teapot",  "pregnant woman" and "back over the hill". Although some intrepid spirits in the audience participated, as a group, we largely failed ... and in so doing, probably sacrificed our chance to hear her cover The Bangles' song "Walk Like an Egyptian", which I've read she's performed at other stops on the tour. Fortunately, we were later treated to a great cover of Chaka Khan's "Ain't Nobody" (during the encore).

In introducing Black Horse and the Cherry Tree, she noted a family holiday in Port Townsend when she was growing up, fondly remembering the well-to-do hippies selling oddities such as elk piss in the town. She also recounted a whale watch, where every time a baby whale would breach, everyone on the boat would say "Wooooh!" ... which she then parlayed into the "woo hoo ... woo hoo ..." intro to the song. She later noted a "random fact" about ear wax being more prominent in people who are afraid; I've read about other random facts she's inserted into other concerts ... and may try that next time I'm chairing a session at a conference ... though I probably won't bring my guitar.

Anyhow, here is her setlist, as best I can recall:

This was our first visit to The Moore. After enjoying an early dinner with Yogi and Dawn across the street at the Buenos Aires Grill (though the food itself was not very impressive), we arrived at the theater around 7:40, 20 minutes before the show, and were still able to get seats very close to the stage - second row from the stage in the narrow column of seats at the far left of the stage.

The opening act was Paddy Casey, a singer/songwriter from Dublin, who reminded me of a cross between David Grey and Aztec Two-Step. We enjoyed his music, but often couldn't make out the lyrics very well.

Of course, we sometimes couldn't make out KT's lyrics either, but we've heard her songs before (many times, in some cases) ... and feeling the energy first-hand was a real treat.