This is pretty cool (though I'm admittedly biased): a mid-stage startup (MyStrands, the company I work for) that has recently secured funding now offering an opportunity to fund an earlier stage startup - a sort of entrepreneurial karma, where we keep the investment flowing in ways that will [hopefully] benefit us all. This initiative is inspired, in part, by the Y-Combinator, but is more narrowly focused (recommender systems). [BTW, one of the partners in Y-Combinator, Paul Graham, writes provocative essays that I highly recommend to anyone interested in entrepreneurship.]

Here are the details (from the MyStrands blog announcement, Looking for the best early-stage recommender start-ups): 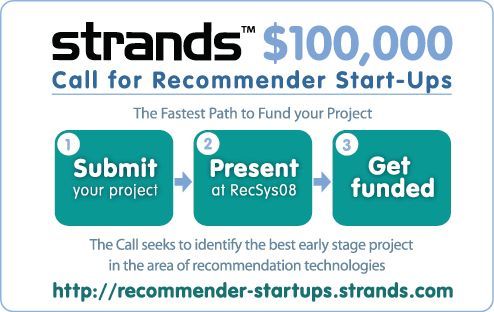 MyStrands is announcing today the “Strands $100,000 Call for Recommender Start-ups“.

We seek to identify the best early-stage project in the area of recommendation technologies, considering the technology, business opportunity and team behind the project (without limitations as to which field the technology is applied).

The Winner will be offered an investment of $100,000 from Strands, Inc. the parent company of MyStrands.

Candidates should submit a one-slide presentation in quad-chart format (example, more examples) by September 15th, 2008 to recommender-startups@strands.com, together with the team bios (in addition to this, an optional 2-minute video uploaded to YouTube describing the start-up enterprise would be highly appreciated).

Eligibility: The Call is open to individuals or sole proprietors and privately held businesses throughout the world.

Five Finalists will be invited to present their projects during the ACM Conference on Recommender Systems (RecSys08) next October 23rd to 25th, 2008 in Lausanne, Switzerland. Finalists will be announced on October 6th. All Proposals will be judged using the following judging criteria: (a) implementation and integration of recommendation technologies, (b) originality and creativity, (c) likelihood of long-term success and scalability, (d) effectiveness in addressing a need in the marketplace, and (e) team bios.

Five grants. Each Finalist will obtain a $1,500 travel grant to attend RecSys08; Strands, Inc. will also cover the registration fees for the Conference, for one person per Finalist.

The final selection process will include on-site presentations of each project during RecSys08. Finalists will make three presentations of 5 minutes each (focused on technology, business and the team respectively) in front of the Jury and the attendees of the Conference.

The Jury will be composed of renowned experts in the academic, industry and venture capital communities.

The Winner will be announced on October 25th, 2008 during the Gala Dinner at RecSys08. The Winner will receive a commemorative plaque and an offer of a $100,000 investment in the form of a convertible loan.