Home Archives Profile Subscribe
The Onion on Voting, Puppetry and Illusions
The Paradox of Choice: Decisions, Happiness and Appreciation

Dark Nights of the Soul 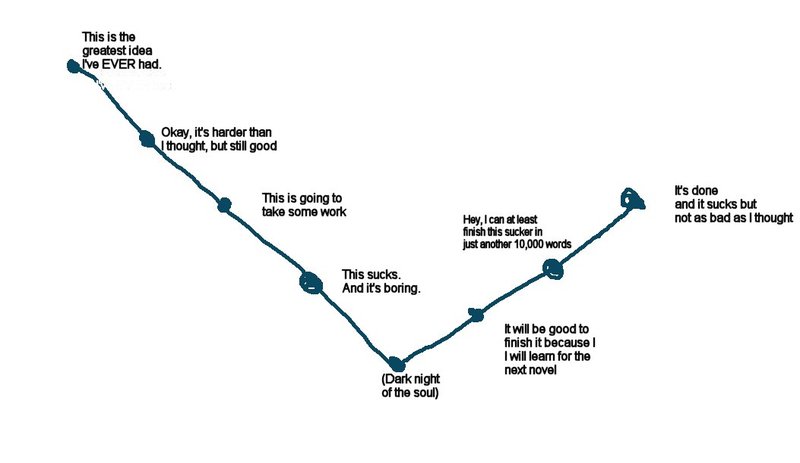 Maureen McHugh, a science fiction writer (who also enjoys "not science fiction" books), has written about the challenges of writing novels (and battling cancer) on her blog, No Feeling of Falling. She augmented her words - which unfold with exquisite openness and vulnerability - with a graphical depiction of the soul work involved in rising to meet these challenges, which is inevitably preceded by a descent of some kind. The image, appropriately entitled Dark Night of the Soul, is shown above; it first appeared in a post entitled Episode 1: Begin Anew, which offers a wonderful perspective from which to view new challenges.

Yogi sent me a link to this image, after a recent guest presentation I gave at a UW Tacoma course on Social Networks, taught by Ankur Teredesai [the presentation was on how proactive displays bridge gaps between online social networks and shared physical spaces]. Yogi had encountered the image in yet another course, on Interaction Design, an area which also offers a set of challenges, though the image and the ideas it represents were more related to our broader conversation after the class about work, soul, passion and happiness. I wanted to continue that rumination here, because it brought to mind (and heart) a few strands of inspiration I've encountered elsewhere. 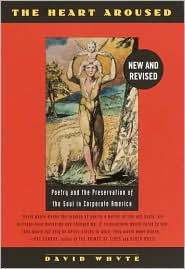 David Whyte, in his book, The Heart Aroused: Poetry and the Preservation of Soul in Corporate America, invokes the epic poem of Beowulf - in which the hero descends into a deep well to battle a monster, Grendel, who has been attacking King Hrothgar's men, and then descends again to battle Grendel's mother - to illustrate some of his insights and experiences into creativity in the workplace. Whyte notes that:

[H]uman existence is half light and half dark, and our creative possibilities seem strangely linked to that part of us we keep in the dark.

and goes on to share the steps he sees in the story - and throughout work (and life) - that are required for unleashing our creativity:

Whyte draws an analogy between Beowulf's battle with Grendel mother and each of our individual battles with the mother of all vulnerabilities: "the deep physical shame that we are not enough, will never be enough, and can never measure up".

He finishes the chapter with a quote from The Man Watching, by the German poet, Rainer Maria Rilke:

Winning does not tempt that man.
This is how he grows: by being defeated, decisively,
by constantly greater beings.

Or, perhaps, one might say, by facing, repeatedly, darker and darker nights of the soul.

In an earlier post on an unfolding series of peak and pit experiences, I'd written about how inspired I was by Dan Oestreich's insights into and applications of Otto Scharmer's ideas about "Theory U". I want to repeat - again - what Dan had to say:

We all want to know where the point of transformation lies. I would say it is in “no space,” the place we come to after exhausting everything we know…and everything we are, a point of pure meditation. The current theory base, exemplified by Oscar Scharmer’s “Theory U”, suggests exactly this process of emptying ourselves of everything known so that we can listen to a best future Self, a source of deep intuitive wisdom... Scharmer describes the bottom of the U as where we touch a larger field that goes beyond our present awareness, a place of new insight and new consciousness that enables us to solve the problems we have been stuck by using our current, more limited awareness.

I also want to include a larger version of the image Scharmer uses to illustrate Theory U, as it closely relates to the image of the Dark Night of the Soul I started with at the beginning of this post: 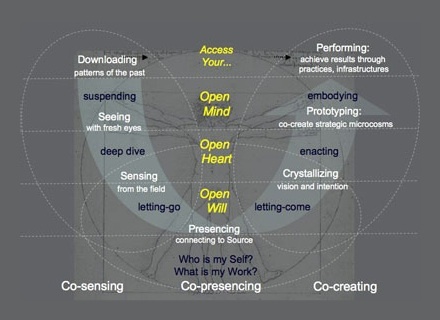 I still have not read Theory U (yet), but revisiting this image reveals another dimension of connection (for me (and my work)), with respect to the inspiring ideas of co-sensing, co-presencing and co-creating - not to mention open mind, open heart and open will - so I've ordered a copy of the book.

Meanwhile, based on what Dan has written (and what I've experienced), I suspect the process of descending and rising from the depths of our selves and our work is an ongoing educational journey ... leading through a series of dark nights of the soul(s) ... and, hopefully, some bright days, as well.

Oh, I almost forgot to add that the image also reminds me of stories I've heard about "thesis hill", a visual representation that Roger Schank (my academic "grandfather") employs - or employed - in his meetings with graduate students. Thesis hill, as I understand it, was depicted using an inverse geometric representation - climbing a hill vs. descending into darkness - but in my experience, and in the experience of many people I know (including many of Roger's former students - my "uncles" and "aunts"), working on a Ph.D. thesis often requires persevering through many dark nights of the soul ... and Rilke's quote about repeated, decisive defeats by greater (or, at least, more powerful) beings is one of the best, short verbal characterizations of graduate school - and especially, a thesis defense - that I've encountered ... rivaling the visual characterization of the Dark Night of the Soul. And, I suppose, writing a science fiction novel has many characteristics in common with writing a Ph.D. [scientific] thesis, just with varying intentions - and interpretations - with respect to the relative use of fact and fiction.

[Update, 2008-04-01: I just stumbled upon this relevant quote - from one of my heroes, who certainly had keen insights into darkness and souls - on Aaditeshwar Seth's home page:

"Writing a book is a horrible, exhausting struggle, like a long bout of some painful illness. One would never undertake such a thing if one were not driven on by some demon whom one can neither resist nor understand."