Music and Personality: Reflective and Complex

As part of my ongoing personal and professional re-engagement with music (since the initiation of my instigation at MyStrands), and renewed exploration of how tastes in music and other media can offer new opportunities for engagement marketing, I was reading up on some of the work by Peter Jason Rentfrow and Sam Gosling on music and personality.

Their research, which includes a short test of music preferences (STOMP), explores mappings between preferences for music and [other] personality traits. Based on data collected from 3,500 people, they identified four music preference categories:

and report that "Preference for these music dimensions were related to a wide array of personality dimensions (e.g., Openness), self-views (e.g., political orientation), and cognitive abilities (e.g., verbal ability)."

Far more details about their research methodology and findings are included in a paper they published in the Journal of Personality and Social Psychology - a journal I keep encountering in my research (perhaps reflecting my increasing orientation toward the social and psychological implications and applications of technology (so much so, that I've decided to join the Society for Personality and Social Psychology and subscribe to the journal)):

I won't delve deeply into all the details of this paper, but some of the highlights (for me) include corroboration for a number of theories / intuitions I've entertained:

One of the dimensions of music preferences the authors did not investigate [thoroughly] was the situational aspect - the music I like to listen to is strongly influenced by where I am, who I'm with and what I'm doing (among other things). The authors did report on the range of contexts in which people listen to music (e.g., waking up, going to sleep, driving, studying, working, hanging out with friends and exercising), but did not explore how those contexts influence music preferences.

MusicFX - a group recommender system we created several years ago to allocate influence over the music playing in a fitness center based on the preferences of those who were actually working out at any given time - succeeded largely because we asked people only for their preferences for music while they were in the fitness center. We had several users who submitted comments like "I really like opera, but not while I'm working out" (the situational influence of place, activity and perhaps time), and we observed instances where users adjusted their preferences toward more popular genres when their initial preferences resulted in rather unusual genres of music being played (the situational influence of other people). I've referenced a number of other situational music preference systems in an earlier post on roadcasting, and MyStrands' partyStrands application is a more recent example of such a system.

Rentfrow and Gosling note that their study represents just one piece of a full[er] theory of music preferences (and personality) - and it certainly represents an important contribution. I recently ordered Daniel Levitan's book, This Is Your Brain On Music, which I suspect also offers important contributions to a more complete theory of music and personality.

Of course, in the commercial domain, radio advertising has long recognized the connections between music preferences and self-image (and projections of image). With the growth of online radio, however, traditional radio advertising has declined, or at least flattened out, despite the fact that 93% of consumers in America still listen to traditional radio (according to the Radio Advertising Bureau). Cranking up the music in your car or dorm room used to be a popular way of projecting one's personality and tastes (ahem, at least for some people), but I imagine the growth of other [online] media that are being utilized for self-image construction and projection - Facebook, MySpace and other social networking services - may be affecting choices of projection channels these days.

[Interestingly, and somewhat related to preferences, advertising and brains, the recent Advertising Age video piece on [what amounts to] your brain on advertising (based on Sands Research neurophysiological testing of people watching Super Bowl Ads), suggests that the connection between brain activity and other, more conscious activities and behaviors indicators such as the USA Today Ad Meter and other popularity polls - or perhaps people purchasing products - is not very strong.]

Popping up a few levels, and turning from academic and market research to methods that are somewhat more generally approachable, Rentfrow has developed and posted a web-based music and personality test. I took the test, which yielded the results shown in the screenshot below: 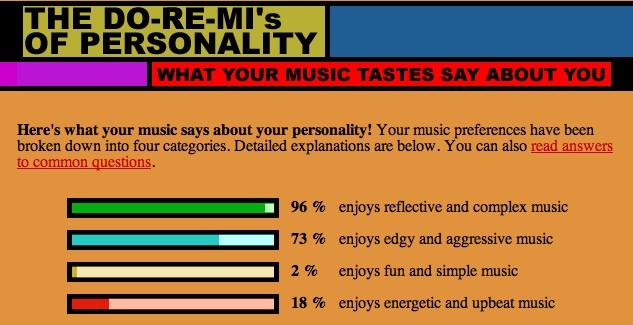 The results page goes on to describe the various facets in further detail. I'll just include the first category, which appears to be the dominant one (96%) for me.

People with high scores on the reflective and complex music-preference dimension tend to be open to new experiences, creative, intellectual, and enjoy trying new things. When it comes to politics, they tend to lean toward the liberal side. Wisdom, diversity, and fine arts are all important to them. When it comes to lifestyle, high scorers tend to be sophisticated, and relatively well off financially. After a hard day of work, if they're not listening to music or reading a book, they enjoy documentary films, independent, classic, or foreign films.

This certainly matches my self-image, as eerily closely as the description of the ENFP personality type (in the Myers-Briggs typology) in which I was categorized after taking the Keirsey Temperament Sorter II test. I'll note that these results can both be viewed simply as self-fulfilling prophecies - I was answering the questions from the perspective (conscious or unconscious) of my self-image ... or self-projection. But that's OK, if the goal is simply to link some elements of my self-image to other elements of my self-image, especially for the purpose of facilitating my discovery of new people, places or things that may be of interest and value to me (and/or my self-image). I'm not sure yet how to effectively technologize this kind of linking (and thinking), but will be delving deeper into these potential linkages.

BTW, Rentfrow has also created a web-based test to find your Star Wars twin ... the results for which suggest I'm a cross between Yoda (95%) and Obi Wan Kenobi (90%). I wonder what kind of music they like to listen to ...

Posted at 08:05 AM in Music, Psychology, Research, Web/Tech | Permalink | 0 comments