Ever since my last post, which started out about locked-in syndrome (inspired by The Diving Bell and the Butterfly), but which developed into a revisitation of a frequently discussed topic [on this blog] - "the need for approval ... for validation ... for appreciation ... for mattering" - I've been attuned to validation in a variety of forms and forums.

The stream of comments that followed my initial post were incredibly engaging and validating - to know that two people I admire so much were touched by the post, as was another person who serendipitously stumbled upon it - and all of them helped draw me a bit deeper (and more broadly) in a followup comment into the topic(s) I'd touched on in the initial post ... culminating in my revisiting one of the most validating poems I've ever encountered: "Love after Love", by Derek Walcott ("... You will love again the stranger who was yourself ...").

However, another comment on that thread - and a number of other recent comments on a number of other posts - initially appeared validating, but upon closer inspection (and reflection), seem less so. In an earlier post, in which I was commenting on commenting, I explicitly named - and thus (I believe) alienated - a friend who had posted a validating comment which had a very similar syntactic look and feel to other comments which I labeled spampliments - thinly, though sometimes effectively (due to my incurable addiction to validation - online or offline), disguised spam compliments. Such comments appear to be primarily intended to add "google juice" to various web sites - by incorporating a URL in the comment itself and/or in the commenter self-reference. I'm tempted to delve deeper into this shadow - I tend to be very self-referential in both my blog posts and comments on this and other blogs - but given my perception that I lost a blog commenter (if not reader (if not friend)) last time I ranted about this, I think I'll simply drop it, but not without first noting that validating comments that [initially] appear to be validating me (or my blog ... not that I think the difference is significant (and therein lies the rub)) is an ongoing challenge. I do want to be very explicit, though, that I really do appreciate (and feel validated by) comments from people who are in some way moved by what I write. [Ironically, I recently noticed that the number of comments on my blog has superseded the number of posts ... and that trend may reverse itself [now] ... but I feel impelled to write what I think and feel.]

Anyhow, returning to the original thread, yesterday, during the 4+ hour drive down to MyStrands HQ in Corvallis, OR, I had an unusually long time for audio engagement. During the first portion of the drive, I listened to the audiobook rendition of The Four Agreements, by Don Miguel Ruiz. I've already written about his second agreement - don't take anything personally (the same post in which I explored my shadow(s) about commenting on commenting) - and his fourth agreement - always do your best (about which I [still] feel strongly ambivalent). One of the things that jumped out at me during this particular listening experience was his description of how, as young children, the adults in positions of authority (parents, teachers, ministers) hooked our attention, and "domesticated" us by cultivating an addiction to future attention ... resulting in, among other things, our willingness - and even desire - to [try to] be who we are not simply to please other people ... i.e., just to receive validation (from others). 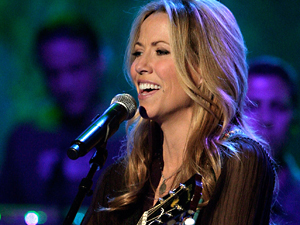 I then switched on the radio, to catch some NPR news ... which was immediately followed by Terry Gross' Fresh Aire interview of Sheryl Crow, one of my favorite artists (make no mistake). During the interview, entitled Sheryl Crow: Gracefully Navigating "Detours", she spoke - among other things - of her need to be accepted and appreciated for her music, not [simply] for her physical beauty. She said she intentionally dressed in a bedraggled style and used black makeup in the photo shoots for the cover[t] art on her first two albums - Tuesday Night Music Club and the self-titled Sheryl Crow (I always thought it odd to have a self-titled second album) - in an attempt to obscure her visual attractiveness, so that people would be better able to hear and appreciate her aural artistry. Well, at the risk of dating myself, and without delving too deeply into this shadow, her first two albums were my gateway into opening up again to popular music, after a nearly 20-year "dry spell". Her musical talents shined brightly (for me), and despite her attempts to hide her physical attributes, those too shined through pretty clearly (I'll briefly note that Pink Floyd's song, "Shine On, You Crazy Diamond", was released near the end of what I consider the [last] golden age of rock and roll). Anyhow, the point I really want to emphasize here is that I find it reassuring that even an artist as immensely talented as Sheryl Crow still feels the need to be validated ... which makes me just a wee bit less self-conscious and more accepting about this need in my self ... perhaps enabling me to better love [myself] with a paper thin heart.