Unconcerned About Privacy: The Pew Internet Report on Digital Footprints

The recent report from the Pew Internet & American Life Project on "Digital Footprints: Online identity management and search in the age of transparency" presents some interesting statistics and analysis regarding people's awareness and use of digital information about themselves and others on the Internet (their "digital footprints"). The most interesting result, to me, was the revelation that "60% of Internet users say they are not worried about how much information is available about them online."

The Pew study groups U.S. adult Internet users (which I will refer to as "Internet users" from this point on, to simplify exposition and reduce redundancy) into four categories, with respect to their privacy perceptions and actions:

This large number of people being unconcerned (not worrying) about privacy - the 60% of Internet users who are "confident creatives" or "unfazed and inactive" - contrasts sharply with previous reports on privacy concerns. One of the things that is interesting about the Pew survey is that it distinguishes between perceptions and actions - who is worried about privacy, and who is actually doing  something about it. It's also interesting to note that 54% of the people who say they are worried about how much information is available about them have not taken any steps to limit the amount of information available about them ... reminding me of people who complain about politicians but don't vote in elections (which I estimate to be at least 36%, based on recent U.S. census figures about voting).

These differences between perceptions and actions with respect to privacy been conflated in earlier studies. For example, a 2003 Harris poll conducted by Dr. Alan Westin used a different three-tier categorization, and was based on sampling all Americans, not just Internet users, and asked about privacy in general, not just online privacy (though both distinctions are eroding over time, e.g., Pew estimates that 71% of the U.S. adult population is now online, i.e., use the Internet, and I suspect most people who are concerned about privacy are most concerned about online, vs. offline, information ... though today's recent Wall Street Journal report on IRS employees "browsing" through tax returns raises some privacy concerns for me):

There are a number of issues that have been raised about the methodology, labels and conclusions of this poll - Ponnurangam Kumaraguru and Lorrie Faith Cranor provide an in-depth survey of privacy polls conducted for Harris by Dr. Alan Westin - who, interestingly, does not appear to have a homepage - over the past 30 years, including this one (which appears to be the most recent) - but it does suggest very different perceptions (if not actions) with respect to privacy.

I'm not sure how much of the appearance of fewer concerns about privacy reflects actual changes in perceptions or changes in sampling methodologies (or analysis), but it suggests to me that many concerns about privacy concerns have been overstated. And personally, I feel a little less like an outlier now that I've moved from a tiny minority (one of the 10% of privacy unconcerned) to a slightly larger minority (one of the 17% of creative confidents).

In addition to labeling four quadrants of privacy perceptions and actions, the report also distinguishes between an active and passive digital footprints:

There are, of course, some grey areas, e.g., data made available through unanticipated effects of privacy policy changes in online social networking services, but I think this distinction offers useful handles for categorizing participation on the web.

There were a number of other interesting findings in the report: 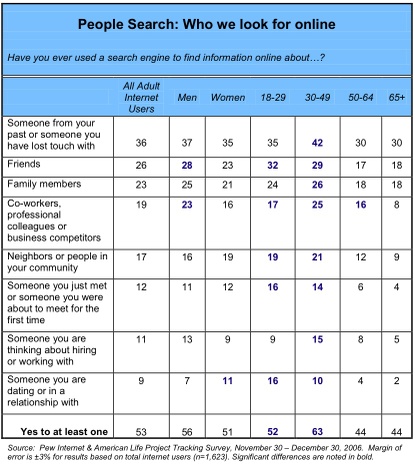 There are several figures in this table that strike me as astoundingly low:

I received yet another email announcement from Pew yesterday notifying me that a new study - an update on Teens and Social Media - has just been released. I wrote about the last Pew study on Teens, Privacy and Online Social Media when I was blogging about the overestimation of risk in teens' use of MySpace. I look forward to reading - and blogging  - about the new study, but will save that for a separate post.

Posted at 07:00 AM in Current Affairs, Research, Web/Tech | Permalink | 0 comments