Seeing What I Want To See: Whale Watching ... and WMD 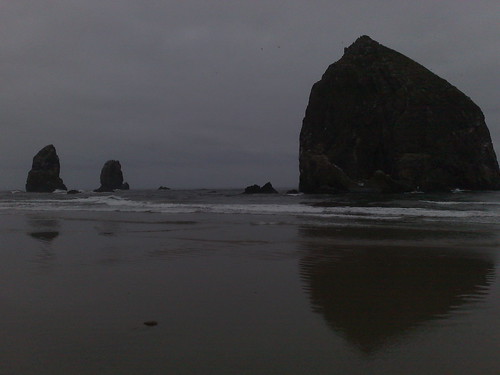 Near the start our recent family vacation along the Oregon coast, we walked up Cannon Beach into the downtown area. During our northerlywalk, we passed several groups of people on the beach who appeared to be deeply engrossed in something to the southwest. I have trained myself, over the years, to ignore spectacles, as to not add what may be undesired attention to a person or activity (e.g., when someone is being tended to by emergency medical responders) ... and to keep traffic flowing in the vicinity (this latter aspect was strongly reinforced during the time I lived in - and drove around - the Chicago area, suffering through numerous instances of "gaper's delay"). So, in this case, we proceeded a few hundred yards up the beach without looking back in the direction of the riveted gazes.

Finally, however, we passed someone with a telephoto lens, who was taking photos of object of their intereest. I stopped to ask, figuring this person could see better than most, and he pointed and said "there are whales out there".

So, I stood there for the next 10 minutes or so, watching the whales, too. It looked like there were two whales, who were occasionally surfacing, then going back down (the story I made up about this was that they were fishing). On our way back down the beach, I kept watching the whales, shooting photographs with my N95, and cursing my lack of a camera with telephoto lens (you can hardly see the whales in the center of the photo above - though if you click through, you can view larger versions ... that also don't show the whales well). At one point, a mother and two daughters were standing just south of Haystack Rock, gazing out onto the water, and I pointed out the whales, and they became excited and started watching and taking photos as well.

Back at our hotel, I went out on the deck, to continue watching the whales. It occured to me that they were spending an unbelievably long time in one place (I figure it had been well over an hour at that point). Peering more closely, aided by a pair of binoculars, I started noticing that there were rocks lying just below the surf in a variety of places along the coast that, when certain wave patterns arose, sent water splashing in ways that looked remarkably like the splash patterns I'd observed with the "whales". Watching the "whales" themselves for a long while, I concluded that they were simply rocks.

My embarrassment was compounded by my having passed on the meme of whale watching to the unsuspecting family (of course, I, too, was the recipient of the meme, so I was simply a transmitter rather than the originator, but it was still embarrassing, nonetheless). I realized that I had been primed by reading some travel brochure that whales can occasionally be spotted along the coast, and that I really, really wanted to see a whale, so it's hardly surprising that, based on observing a few people and receiving a single suggestion, I did see a whale - in fact, two of them!

I share this story here and now for a few reasons. One is that my earlier post on don't take anything personally highlighted my ongoing struggle with projections of various kinds (my own, and the projections I perceive in [project onto?] others). I judge this "whale watching" episode to be a case of projecting what I wanted to see onto what I was actually seeing. I believe it's a bit different from - and perhaps a bit safer to write about than - earlier cases, as the object(s) of my projection were inanimate (despite my projection of animism). However, I do suspect that my love for and fascination with whales probably says something about me. I guess my point in revisiting this somewhat sensitive issue is that what I saw was very much influenced by who I am, what I love and what I want (reminding me of being reminded of - through a comment (which I enjoyed, BTW ... but upon which I will not comment further) on - an earlier and related post on data, feelings, judgments and wants).

The second reason I want to share this story is that it suggests to me that I am not so different, in some ways, from George W. Bush - a projection about which I feel even more embarrassment than my projection of whales. Although I like to think of myself as someone who sees the good in all people, and who believes that we are all kindred spirits at a deep level, there are people with whom I am reluctant to observe (or admit) similarities. As I wrote in an earlier post, One World: Disasters and Responses, inspired by Oriah Mountain Dreamer:

I ask, "How can I BE the peace I want to see in the world, today?" Not, how can I CREATE the peace- but how can I BE it- because it becomes clearer and clearer to me that violence and war are not just "out there" but also inside me.

She goes on to suggest that we can either try to identify and empathize with others, or seek to differentiate others from ourselves; essentially choosing to view others as "us" or "them". She [Oriah] gives examples about substituting "some of us" for "them" or "they" as we think about what others have done (and I would extend this to what others are going through). In her audiobook "Your Heart's Prayer", she further extends this from "some of us" to "sometimes I".

I find it very challenging to see and acknowledge similarities between me and our current president, who I judge to have done more harm - politically, environmentally, economically and socially - to the people and country he leads, and to humanity and the world at large, than any other president in our history. But, if I am willing to let go of that resistance, I see a number of similarities: valuing loyalty (in self and others), being outgoing and friendly, being strongly influenced by the opinions of close and trusted friends, and being willing to take on a role that may be beyond current skills and capabilities. There are a number of differences I see, as well, such as a concern for the environment and a commitment to openness, integrity, compassion and vulnerability. [Invoking Oriah's practice of inserting "sometimes I", I will note that sometimes I do not practice these diferentiating values consistently, and sometimes our president espouses, and occasionally acts upon, such values.]

Anyhow, the reason I wanted to delve into this topic today was that I read an article in Salon asserting that "Bush knew Saddam had no weapons of mass destruction". In the article, Sidney Blumenthal writes:


On Sept. 18, 2002, CIA director George Tenet briefed President Bush in the Oval Office on top-secret intelligence that Saddam Hussein did not have weapons of mass destruction, according to two former senior CIA officers. Bush dismissed as worthless this information from the Iraqi foreign minister, a member of Saddam's inner circle, although it turned out to be accurate in every detail.

The article goes on to offer a number of disturbing details about how our administration analyzes and shares information. I am outraged by these actions, as I am by many of the administrations actions, or at least those that are revealed (I shudder to think what kinds of activities may be going on behind the scenes). This outrage is further stoked by the recent Special Comment by my hero, Keith Olberman, Bush and Iraq, invoking revelations about Bush in Robert Draper's book Dead Certain:

Now, I don't want to cast any projections onto Keith Olbermann (he is, after all, my hero), but I will recast my original projection - seeing what I want to see - onto George Bush ... which is reflected in the conclusion of the Salon article, in a quote from a former CIA officer:

The day after my "whale watching" episode, I passed the mother and two daughters to whom I'd pointed out the "whales" the previous day. I couldn't (or didn't) bring myself to stop them to share with them my new understanding of what we really saw out in the water. It was partly due to embarrassment, and partly due to not wanting to spoil their enjoyment of what they thought they saw (though they, too, may have come to the same realization as I did) - let them content themselves with the story I once believed ... which is a more enjoyable story to reflect upon (and share with others) - seeing whales rather than [just] rocks.

I don't know what Bush believed in 2002 about Weapons of Mass Destruction, and I don't know what he believes now about WMD - or, indeed, anything else. In spite of our similarities about seeing or hearing what we want to see or hear, I like to believe that my misconceptions, and the actions I take based on them, have not had nearly as devastating an impact as those of Bush. And I, at least, am willing to publicly admit my misconceptions ... if somewhat after the fact (and still too late to affect the mother and two daughters, I suppose). I don't judge that Bush reflects much about his beliefs and actions, and don't expect him to in the future, and so I am extremely grateful for public commentators like Keith Olbermann, Sidney Blumenthall and Robert Draper for their willingness to help the rest of us gain greater clarity ... just as on a smaller scale, but no less personally important way, I am grateful for the commenters on my blog to help me gain greater clarity.