A New Generation of Proactive Displays

We launched our new proactive display application at Nokia Research Center Palo Alto two weeks ago. The application - provisionally called the Context, Content and Community Collage - situates online content in a shared physical context to foster a greater sense of community, representing a convergence of the core themes of our Context, Content and Community project and earlier instantiations of proactive displays. The content currently consists of photos that are slowly and semi-randomly distributed across one [or more] of the eight HyTek 46" LCD touchcomputers we've deployed around the lab. 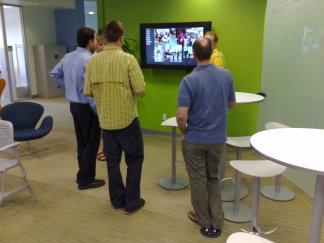 We call these proactive displays because they sense who is nearby - in this case, via Bluetooth phone IDs - and respond - by selecting photos from public Flickr profiles that people have explicitly associated with those Bluetooth IDs. Although the displays support interactivity (people can move the photos or delete them via the touchscreen), their primary mode of "use" is for the system to proactively select and show photos when people draw near, without requiring any kind of direct interaction by those people.

This work extends earlier work on proactive displays in interesting and [hopefully] useful ways. An earlier installation of proactive displays at UbiComp 2003 used RFID tags and readers to sense who was nearby, drew content primarily from specially-created web-based profiles, and were only in use for three days (during the conference).  The new proactive displays use Bluetooth phones for sensing, draw content from other sources such as Flickr, and will be in use, well, for the foreseeable future (I hope (!)).

I was fortunate during our earlier instantiation of proactive displays to be working with a team of three fabulous interns, and was disappointed about unanticipated events that disrupted that trajectory of research (at that time and place). At this new time and place, I once again feel fortunate to be working closely with another group of three fabulous interns - Max Harper, Ben Congleton and Jiang Bian - along with the rest of the NRC Palo Alto Context, Content and Community team, following through on some earlier articulated intentions for working on context, content and community, increasingly wholeheartedly enthusiastic [again] about prospects for proactive displays ... and feeling a certain affinity for the myth of the Phoenix at the moment.

At the two week mark now, early responses - by people to the displays - is very encouraging, and our short term challenges are how to keep up with all the cool new features people are suggesting ... and how to effectively evaluate the impact these displays have on the people here. It's hard to believe the interns will only be here another few weeks, but I'm confident we'll [continue to] make good progress. Meanwhile, I posted some slides I presented at a workshop a few weeks ago at Communities & Technologies 2007 that outline some of our initial plans and goals, and will be posting some new slides after my upcoming talk at Yahoo! Research Berkeley Brain Jam on August 17.

[Update: Jeff Johnson posted a video he took of a proactive display in action during a recent visit to the NRC Palo Alto site, embedded below.]

[Another update: embedding my slides from CSCW 2008, which are based on our paper, The Context, Content & Community Collage: Sharing Personal Digital Media in the Physical Workplace.]