The highlight of the recent Communities and Technologies Conference (C&T 2007) - for me - was Judith Donath's keynote on "Agents and Faces: The Reliability of Online Signals" (based on her course - and forthcoming book - on Signals, Truth and Design). I'd posted a relatively tiny summary of an abbreviated glimpse she'd offered in a short talk at the 2006 Microsoft Research Social Computing Symposium, and I was absolutely delighted to get a larger dose of her insights into the application of signaling theory to online and offline social networks.

Judith began by defined signaling theory as "an economic approach to understanding how certain signals are reliable", focusing on the costs and benefits for signalers and receivers. She differentiated between signals, which are intentionally communicated by an actor, and cues, which are features perceived by an audience - corresponding to Erving Goffman's distinction between giving and giving off in The Presentation of Self in Everyday Life - and noted that the signals one intends to transmit do not always correspond to the cues perceived by others. As an example of discrepancies between signals and cues, Judith noted that fur coats are presumably given to and worn by women to signal positive qualities such as wealth, appreciation and/or good taste, but often are perceived as evidence of negative qualities such as cruelty or insensitivity (to animals) or wasteful extravagance; I found myself thinking about similar discrepancies between signals and cues associated with Hummers (the FUH2 Photo Mosaic Poster is an interesting case of an aggregated signal transmitted in response to a set of cues that presumably do not correspond to the [primary] intentions of H2 owners ... though I must admit to sometimes wondering about the intentions of - and the implicit or explicit cost / benefit analyses performed by - such people [Update: all the moreso after having just watched "Who Killed the Electric Car?", in which Hummers were implicated ... and which offers a compelling case study for anyone interested n signals, truth and design ... and/or politics, business and the environment]).

Judith differentiated three types of signals: handicap signals, index signals and conventional signals. Handicap signals are costly to produce, and are considered reliable because the quality they signal is consumed in the production of the signal, and the signal tends to be more expensive to produce for an individual with less of the quality; examples include a male moose growing and carrying a rack of antlers (signaling disposable energy) or a male human buying $400 bottles of champagne at a night club (signaling disposable income). Index signals are less costly to produce because they do not consume the quality they signal, but still typically require that quality for an individual to produce the signal. The title of this blog post refers to an observation Judith made about tigers, based on the book Animal Signals by John Maynard Smith and David Harper, in which they note that tigers scratch trees to mark their territory; they stretch as high as they can in scratching, effectively signaling their size to other tigers who may approach these boundary markers. Maynard Smith and Harper mused that if small tigers were ingenious enough to stand on boxes when they scratch trees, they would be able to amplify their signal considerably, with little additional cost (I'll return to the boxes theme in a bit).

Most signals in the world - or worlds (online and offline) - of human behavior fall into the third category, conventional signals, which have no inherent connection to the quality they signal, but rely instead upon extrinsic societal forces for their meaning and reliability through rewards and punishment. Examples include bumper stickers, iPhone email signatures and online profiles of various stripes.

Conventional signals remind me of the distinctions between society and culture made by James P. Carse in his book Finite and Infinite Games: A Vision of Life as Play and Possibility:

In their own political engagements infinite players make a distinction between society and culture. Society they understand as the sum of those relations that are under some form of public constraint, culture as whatever we do with each other by undirected choice. If society is all that a people feels it must do, culture is "the realm of the variable, free, not necessarily universal, of all that cannot lay claim to compulsive authority."
...
Society is a manifestation of power. It is theatrical, having an established script. Deviations from the script are evident at once. Deviation is antisocietal and therefore forbidden by society under a variety of sanctions. It is a highly valued function of society to prevent changes in the rules of the many games it embraces. Deviancy, however, is the very essence of culture. Whoever merely follows the script, merely repeating the past, is culturally impoverished.

This distinction between society and culture seems to lie very close to the notion of fashion, one of the dimensions Judith explored in depth (which gave me a greater appreciation for the depth of fashion, which I typically think of in rather shallow terms). Fashion seems to arise in a cultural context, but successful fashions tend to migrate into a more societal context ... thereby necessitating the truly fashionable to seek out new deviations, which then become adopted by society (and thus less deviant) in what strikes me as a perpetual arms race. Judith spoke of the risk of being at the forefront (a mode of playing the edge), and noted how utility / usefulness is antithetical to fashion: if it's useful, it's less risky, and thus less fashionable (which may help explain why there are few - or, some fashionistas may argue, no - examples of business casual cargo pants ... though I keep hoping they will appear, however unfashionable). This fashionable aversion to utility is related to people's general desire to signal a willingness to take risks, evidenced by the risque photos and stories often posted on social networking services (especially by young, fashion-conscious, users), and [perhaps] in the rise of unprotected sex (and HIV infection) among gay men (this was not an example cited by Judith, but one that came to [my] mind during her talk).

One of the points that Judith did make was that signalers and receivers both must benefit, or they'll stop signaling and/or heeding the signals, and thus deceptive signaling disrupts this system (if it is perceived as deceptive). Deceptive signalling got me thinking (and asking) about politics. Ed Schipul, who was sitting in front of me when I asked a question on this topic, pointed me to MAPLight.org, as an example of revealing political signals (in this case, campaign contributions), but, at the risk of being (or appearing) cynical, this got me questioning the extent to which people really want to know the truth.

No discussion of politics could be complete without a discussion of wealth (and typing this leads me to wonder whether politics is anything more than the preservation of wealth). So much of signaling seems to be about wealth; we all want to be wealthy (perhaps only differing in the dimensions of wealth we want to enjoy), and nearly two-thirds of Americams still think they are middle class, although most estimates suggest that less than half of Americans are middle-classmates, perhaps refecting the Lake Wobegon effect, where everyone's above average.

On a certain level, our society seems to be practicing mass self-deception, thinking we all are - or can be - middle-class, or better (I suppose this is part of The American Dream, but dreaming is a form of self-deception). I have to wonder about how this impacts the costs and benefits of our signallng and reception - if we don't really want to know the truth, then the "cost" of deception is lowered ...  and the benefits of deception correspondingly increase ... which may go a long way in explaining why deception seems to be so prevalent in the current administration.

Sticking with politics, and returning to the notion of standing on boxes, I'm reminded that during the presentation, Judith's description of real and imagined behaviors of tigers immediately brought to mind an amusing Saturday Night Live skit on the Bush-Dukakis debate during the 1988 U.S. presidential campaign, which poked fun at the height differential between George H. W. Bush (6' 2", played by Dana Carvey) and Michael Dukakis (5' 8", played by Jon Lovitz) by dramatizing the raised platform (a "box" of sorts) used by Dukakis during their televised debates. 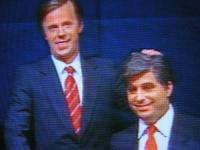 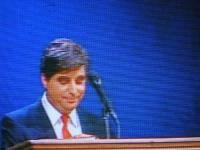 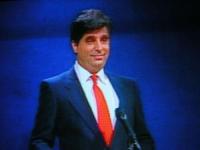 As with most effective parodies, there is more than a grain of truth to this satirization of what might seem like an inconsequential difference between the two candidates: as pointed out in a 2004 USA Today article on time-tested formulas for predicting winners in U.S. Presidential races:

Since the advent of the television age, the taller candidate for president has almost always won the election. ...

The reasons are more than coincidental, according to Timothy Judge, a management professor at the University of Florida in Gainesville. In a study published in the spring issue of the Journal of Applied Psychology, he found that taller people generally tend to receive higher evaluations and be paid more even when the job involved has nothing to do with height.

Taller people are seen as more authoritative and as stronger leaders, he says. That could be a remnant of human evolution, he speculates, when the species' survival in the jungle or on the plains depended on strength and power.

The article goes on to note one exception to this formula - the 2000 defeat of 6' 1" Al Gore by 5' 11" George W. Bush ... who then went on to defeat 6' 4" John Kerry in 2004. But if one is willing to discount the effects of a questionable court decisions and/or question the appropriateness of the electoral college system in modern politics - or simply apply the formula to the popular vote in each election - then the formula appears to be 100% accurate. As much as I'd like to believe that other signals and cues would be more important in future election outcomes - say, evidence of integrity, openness, vulnerability and compassion - I find myself wondering about the heights of candidates in the 2008 U.S. Presidential campaign.