I have been suffering for the past several months with the 3rd episode of tendonitis in my right elbow in 3 years. The first episode occured in November 2004 after excessive raking - I spent every waking moment for 2 consecutive dry days raking the wet leaves that had fallen over several rainy weeks from the Bigleaf Maple trees in our yard. After waiting several weeks for the pain to go away, I started several weeks of physical therapy, eventually coupled with several weeks of acupuncture - neither of which had significant effect (I was told that 30% of people have neuroreceptors that are not receptive to accupuncuture treatment, and I was likely a member of that minority); a cortisone shot finally resolved the problem in the summer of 2005.

The next episode occured in February 2006, when I joined some other fathers in running an informal baseball training clinic for our boys, who would be soon trying out for Minors in Woodinville Little League. I threw pitches in a batting cage for over an hour, after which my right arm felt like rubber ... after which my right elbow felt a great deal of familiar pain. This time, I thought I'd cut to the chase, and started with the cortisone shot. Unfortunately, this has no effect, so I tried physical therapy, but that had little effect, either. Finally, I went to see Becky Beveridge, of Feel the Knead Massage Therapy in Duvall, WA, who practices a rather unique style of massage she somewhat uneuphemistically calls "search and destroy" (as contrasted with the school of "fluff and buff" massage) - and in one session, the pain was gone.

The latest episode started in October 2006, shortly after joining Nokia Research Center Palo Alto. I suspect that the trigger was some combination of a new computer (IBM Thinkpad with a TrackPoint), a new physical workplace environment (Steelcase furniture with Herman Miller Aeron chair), and the inevitable stress that accompanies any significant life event, even one that is positive and welcome - actually, all of these were welcome developments, as I'd missed the ThinkPad + TrackPoint, Steelcase furniture and Aeron chairs I'd enjoyed at Accenture Technology Labs, as well as the opportunity to actually earn money while doing work that I love. Perhaps the stress of the long commute was a factor.

In any case, this time, I started with Becky, but despite three treatments, there was little change. I've been so engaged in my work during the weekdays, that it took me a long while to find - or make - the time to find a new doctor (now that I was spending weekdays in Palo Alto). I wasn't sure how to find a good doctor, but I'd walked by the Agile Physical Therapy office many a time on my way to / from lunch on California Avenue, and figured they would probably be able to recommend good doctors.

As it turns out, one of the doctors they recommended was Allan Mishra, an orthopedic surgeon at the Menlo Clinic who specializes in tendon disorders, and who is pioneering a new, relatively non-invasive, treatment for chronic tendonitis, using Platement Rich Plasma (PRP). The treatment involves withdrawing blood, separating the platelet rich plasma from the platelet poor plasma, and injecting the PRP into the injured area, which stimulates growth factors in the blood to help regenerate and repair the tissue in that area. More details can be seen in a 5-minute video that Dr. Mishra has posted on YouTube (!):

The new treatment is not [yet?] FDA-approved, and I'll be paying for it out-of-pocket (and, unfortunately, we've never played the HSA game). However, the level of expected disability is lower than surgery, and the expected recovery time is shorter, and so I'll be able to type two-handed again sooner ... and avoid some of the other risks inherent in surgery (not that the PRP treatment is without attendant risks).

I'll be undergoing the procedure at noon today, and there will still be a period of at least a few weeks where I'll be avoiding or significantly reducing the use of my right arm, and so I'll likely be reducing the frequency and length of blog posts (and other forms of written or typed communication) for a while. Perhaps this will give me a chance to catch up on some reading... 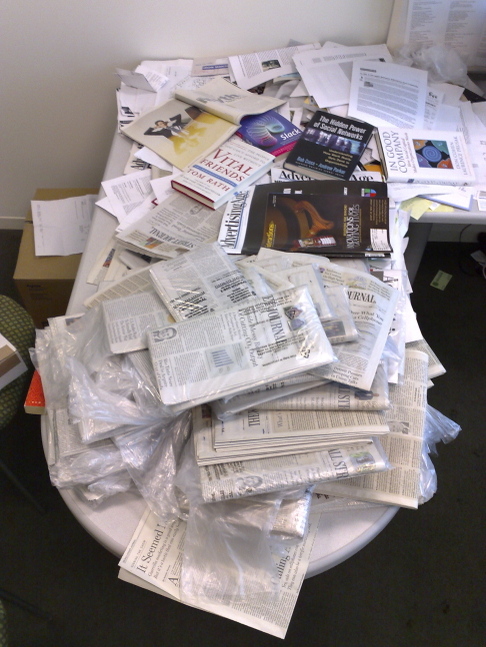