Attention and Inattention ... Appreciation and Depreciation

One of the Foo Camp 2007 sessions I most enjoyed was on the topic of Attention and Inattention, led by Kathy Sierra, Linda Stone and Dan Russell. One of the most surprising aspects of Foo Camp (for me) was that when I expressed appreciation to a couple of people I greatly admire for the inspiration they have [unknowingly] offered me, they seemed surprised at receiving such explicit acknowledgment of their impact. I started reflecting on the potential linkages between attention and appreciation ... and inattention and, well, depreciation. But first, a bit more about the session.

Linda defined continuous partial attention as doing two or more things simultaneously that require cognition, arguing that this is not a disorder (as it sometimes appear to us old fogies) but an attention strategy. She said that what most characterizes people who were successful in adopting a CPA strategy is their breathing patterns - they are better able to maintain mindfulness amid the multiple competing objects of attention. Linda mentioned that Liz Lawley is studying the use of Twitter, and is seeing two general patterns emerging: grandstanding and continuous partial friendship.

Dan presented an analysis of the attention patterns of Don Norman's assistant, Michele, differentiated 5 steps involved in attention switching (realization, saving state, selecting new task, switching attention, performing new tasks), and presented some simulations whose results suggest that the only variable that significantly affects the costs of interruptions is the variation in length of the interrupting task (consistency being less costly than high levels of variation).

Kathy - who, as I've noted before, is (was? (will again be? (!))) one of my favorite bloggers - led us on a tour of what was (for me) a trip down memory lane, revisiting some of the fabulous insights she has shared about fine-grained treats = user happiness (in which she described how clicker training for horses suggests that intermittent, variable rewards are more effective than regular rewards ... and helps explain the addictive experiences of email, blogs, Twitter, etc.), 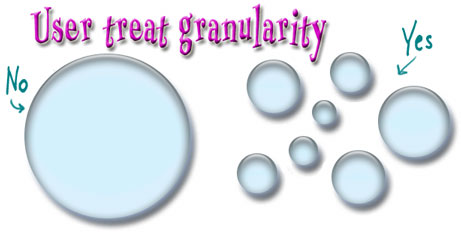 the myth of "keeping up" (noting that you can't keep up, but neither can anyone else), 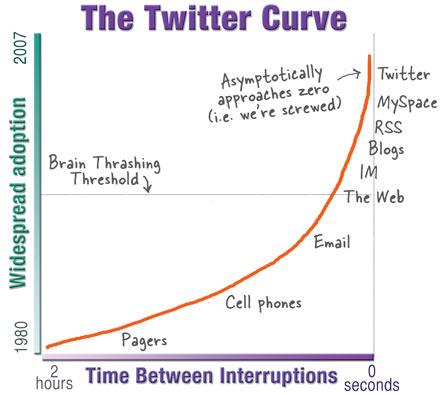 Kathy concluded by raising the issue of how all of this affects our ability to develop expertise, noting that the difference between real experts and non-experts seem to be more dependent upon genetic predispositions on the ability (or willingness?) to focus than on any other particular ability, very much in alignment with observations made by Art Benjamin at ETech 2007 on the importance of dedication and practice (or, as he put it, "misspent youth"), and Doug Rushkoff on "discovering what it is about what we do that genuinely fascinates us, and then going as deep into that joy of investigation, commitment and process as we can stand."

Blaine Cook, one of the principals behind Twitter, happened to be attending the session. He argued that, despite the potential for interruption and distraction, Twitter offers ambient intimacy, enabling friends to stay in touch in a lightweight manner. Blaine claimed that most Twitter users are "old" (i.e., over 30), and [afterward in the hallway] that even he prefers the IM-style use (on a computer) than the SMS-style use (on a mobile phone) - I have to admit that the SMS "alerts" I receive from Twitter friends do not seem terribly "ambient", and that I hve not tried the computer-based version.

This brings me back (or gives me an excuse to return to) the connection between attention and appreciation. Sending out a Twitter message demands (or, at least, requests) attention, without supplying attention - "hey, everyone, here's what I'm doing / thinking / feeling" vs. "hey, everyone, what are you doing?".  Twitter posts may encourage others to [then] post whatever they are doing / thinking / feeling in response to receiving such messages - and I sometimes get the sense that posts i receive were triggered by unseen [by me] posts received by other senders - but this almost seems more like distributed inattention than distributed attention. Perhaps I simply don't have enough [Twitter] friends, but I just don't feel much appreciation for Twitter ... and don't feel much appreciation through others' use of Twitter.

I'll use this last observation as a pretext to return to the topic of appreciation.  Merriam-Webster defines appreciation as the recognition of value or the expression of admiration, approval, or gratitude. Someone broadcasting a message to a group of which I'm a part does not seem to confer much value upon me as an individual. If anything it seems to confer value upon the sender rather than the receiver. As Liz Goodman noted, in reaction to one usage scenario of Twittering to stay connected to one's mother: "Don't you have time to call your mom?" [Disclaimer: I'm not so good about calling my mom, so I'm not pointing any fingers (that I'm not pointing at myself).]

It seems to me that Twitter, and other conduits of continuous partial attention, convey, at best, sporadic partial appreciation; receiving Twitter messages makes me feel about as special as receiving any other form of broadcast media. After the Foo Camp session, I had a look at Blaine's Twitter stream, which ooks pretty interesting, and suspect that a browser-based presentation modality may reduce the intrusiveness (with respect to the SMS "alerts"), and offer a broader framework in which to appreciate another person's context. But I think it still pales in comparison to a specifically targeted email, phone call, IM or other communication act. Streams of Twitter messages tend to depreciate [my feeling of] connections with others. I guess I'm more interested in quality than quantity of connections ... but perhaps that's simply a symptom of my advancing age ... and increasingly "distributed" attention.